Are Russians and Americans really the same? 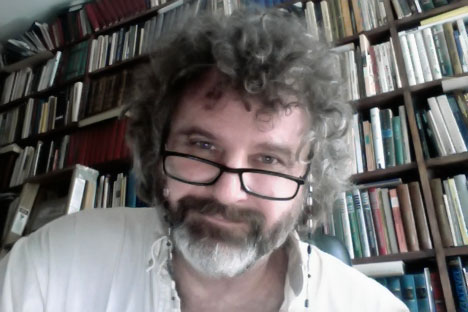 Russian and American dramatists seem closer than one could think.

I don’t believe it for a minute. But I continue to hear it.

I most recently heard it at an evening of readings of short American plays in Russian translation. The event — which was called just that: “An Evening of Short American Plays” — was organized by Georg Genoux of the Joseph Beuys Theater in Moscow. It was held downstairs in the club at the ArteFAQ café. I had a hand in it, too, as the plays came to Georg’s attention through me.

After a bit of vetting, the plays that I delivered to Georg were the following: Erik Ramsay’s “Traction,” K. Frithjof Peterson’s “Gun Metal Blue Bar,” John Walch’s “Aisle 17B,” George Brant’s “Clipped,” Samuel Brett Williams’ “Missed Connections” and David M. White’s “Enough.” Each is a dramatic sketch that takes roughly 10 minutes to read.

That’s when the surprises began. Yury Muravitsky, the director to whom Georg entrusted the work on the readings, told me that he was knocked out by the plays. Very funny, very clear, he said.

Very clear? Very funny? Okay, the old geezer dying in “Enough” might be like old geezers dying in many places in the world, but the lunatics in “Traction” who appear to see religion in the notion of the tire gripping the road? The sadistic middle-aged farmer snapping pigeons’ necks to keep the flock pure in “Gun Metal Blue Bar?”

I was taken aback. Even after living in Russia for 23 years I still never tell jokes in Russian. Never. Ever. And when I do, they fail. Period.

After the readings, I went stalking. I was curious to find out what people thought.

I sidled up to Varvara Nazarova, a fabulous young actress.

“Amazing,” she said with a big grin lighting up her face. “Astonishing how you Americans are just like us Russians! You’ve got that same, like, boldness and, uh, arrogance.”

I asked a stranger about the translations. What sounded rough? Was there anything that sounded un-Russian in the texts?

“Excellent translations,” she said. “They all had a perfect flow as if they were written in Russian. Very funny.”

I moved on to Yelena Kostyukovich. She is the literary director at the Saratov Youth Theater.

“Those were fabulous plays,” she said, her eyes shining happily. “It’s like they were Russian. Their sense of humor is exactly like ours. Very funny, very acerbic on the surface, and devastatingly tragic underneath.”

There’s a Russian phrase that sort of goes, “Don’t leave behind good to go in search of good.” I’m a big fan of Russian wisdom. What else could I do then, but believe what people were telling me?