Russia emerges as a big player in Asia-Pacific 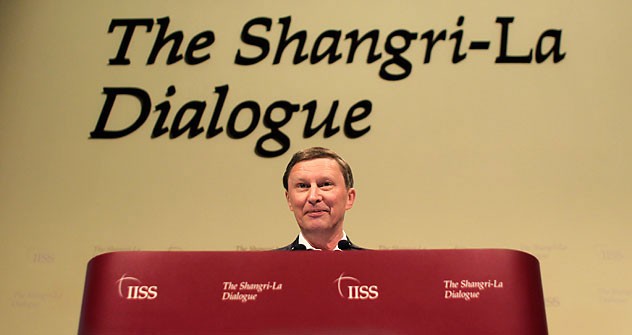 One interesting feature of this year’s Asian Security Summit was the increasing visibility of Russia as a player in Asia’s security architecture.

Last weekend’s Asian Security Summit — otherwise known as the Shangri-La Dialogue — brought together defense ministers and senior military officials from across the Asia-Pacific region. Russia was represented by Deputy Prime Minister Sergei Ivanov, who addressed the annual summit for the second time. In contrast to previous dialogues where Russia was barely mentioned, this year Russia’s presence was noted by many regional players both from Northeast Asia and increasingly from Southeast Asia as well.

Malaysian Prime Minister Najib Razak, who delivered the opening address, said: “I say to our friends from U.S., China, Russia, India and beyond: We in ASEAN share your values and your aspirations, and we urge you to work with us.”

Many speakers have welcomed the fact that Russia together with the United States will be joining the summit of the Association of South East Asian Nations for the first time this year and that Russia has participated in ASEAN Defense Ministers’ Meeting Plus, a format that was inaugurated last year in Hanoi. Russia is also increasingly active in the ASEAN Regional Forum and has been supporting cooperation on issues like disaster relief and counterterrorism.

Russia has started to export its energy resources to Asia. Since it hopes to expand these exports dramatically in the next decade, the Kremlin’s stakes in thorny Asian security issues such as assuring access and freedom of navigation along international waterways and piracy will increase in importance. One indication of Moscow’s long-term security concerns in the region is Russia’s pending acquisition of French Mistral helicopter carriers, some of which would be deployed by its Pacific Fleet.

Russia’s leaders are increasingly focused on establishing the country’s strategic footprint in Asia, particularly in light of the global financial crisis and China’s economic rise. Many in Russia view this strategic balancing act toward Asia as an alternative to Russia’s unsuccessful attempts so far to assert its decision-making role in the Euro-Atlantic security area. Others argue that a more active foreign policy is required to attract investment and development in Russia’s Far East and East Siberia.

Yet Russia’s security policy in Asia still faces many dilemmas, and its strategy appears muddled both for those inside the country and for observers outside.

There are three main questions that arise as a result of Russia’s activism in Asia. The first is whether Russia sees itself as an independent player in regional security affairs, or whether it is seeking to advance this role through a strategic partnership with China. During President Dmitry Medvedev’s visit to China last year, the two countries unveiled an initiative that focused on strengthening security and cooperation in the Asia-Pacific region. Remarkably, China itself tends to downplay this initiative. For example, speaking at the Asian Security Summit, the Chinese defense minister did not mention it at all.

Moreover, there is no clarity as to what this initiative implies. Deputy Prime Minister Ivanov suggested in his remarks Sunday that the proposals do not imply creation of new institutions. He emphasized the need to build trust and “networked security” that engages existing formats and institutions in the Asia-Pacific region. At the same time, however, Ivanov emphasized that this should be based on the principle of nonalignment, the meaning of which is unclear in the contemporary post-Cold War era in Asia.

This raises a second question: What sort of relationship does Russia plan to develop with the United States in Asia? Ivanov’s remarks at the summit failed to make any reference to the United States as a regional player in Asia’s security architecture. But for states in both North and Southeast Asia, the United States remains a pivotal security actor in the region. Moscow itself has recently “reset” its relations with Washington, but the focus of this reset applies to the Euro-Atlantic agenda and, to some extent, the Middle East. In both cases, mistrust has hindered progress on crucial issues such as European missile defense.

Asia presents a different picture. The United States and Russia could have forged a more productive strategic relationship free of Cold War legacies driven by both economic and security considerations. But it appears that Moscow has so far avoided strategic dialogue with Washington on Asian matters, because of the Kremlin’s mistrust of Washington or to avoid provoking China. Whatever the justification, this policy seems shortsighted since Russia’s future role, as a second-tier regional player, will eventually depend on its ability to find the right balance in relations between the two regional superpowers of tomorrow — China and the United States.

The third question is related to Russia’s capacities as a security provider in Asia. Several options exist. First, Russia could emerge as a stabilizing factor in Northeast Asia. Given the historical legacies in relations between China, Japan and North and South Korea, Russia could offer a platform for developing a broader regional security dialogue, confidence-building measures or even some form of regional institution-building. To be successful, though, Russia would have to repair relations with Japan, establish a greater distance from China and demonstrate more active engagement within the six-party talks on North Korea.

A second option is for Russia to choose a functional role in which it can assert its role within the Asian security debate. This could, for example, relate to enhanced cooperation on disaster relief, where Russia has capabilities and experiences to share, or energy security or even cyber security. Russia’s expertise in dealing with nuclear emergencies could be particularly important as regional states are eager to develop assurances that the Fukushima-type nuclear accidents are not repeated in Asia.

The third option is for Russia to promote links between East and Central Asia. Here it will have to compete with other regional leaders — such as Kazakh President Nursultan Nazarbayev — or with other players like China, whose influence in Central Asia is rising.

Russia could make a contribution to much-needed military confidence-building measures in Asia by setting the example of greater transparency and openness in terms of its defense budget and military doctrine, which may compel China to follow suit.

The Kremlin’s Asian endeavors are not opportunistic or temporary. They represent a trend that is likely to persist. As Russia prepares to host the Asia-Pacific Economic Council summit in Vladivostok next year, participants will be assessing Russia’s understanding of regional issues and its ideas for addressing the challenges facing Asia. Getting these right, however, may take more time and effort.

Oksana Antonenko is senior fellow for Russia and Eurasia at the London-based International Institute for Strategic Studies, which organizes the annual Shangri-La Dialogue.