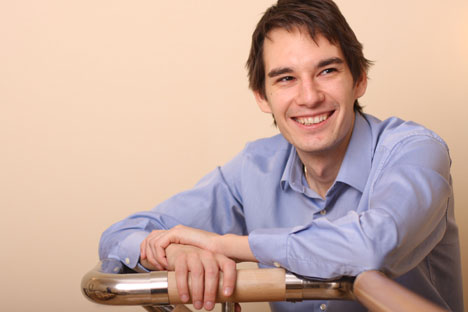 At the musically tender age of 32, Marius Stravinsky is the chief conductor of the Karelia Philharmonic Orchestra, and one of the youngest conductors in Russia to ever hold such an elite position. Born in Kazakhstan, he offers audiences a musical emergence of East and West, with flawless British English and manners to match.

A graduate of Eton College and the Royal Academy of Music in London, Stravinsky was under 30 when he was appointed to the plum position, one usually held by, let’s face it, old men. He clearly relishes his position as a local celebrity, and is quick to play the role of Karelian cultural ambassador.

Stravinsky has also become known for his advocacy of British music, which remains nearly nonexistent on Russian concert programs.

“When I first arrived in London, my music education in Moscow had already [confirmed] the idea that English music is not of high quality; I had been taught that Russians and Germans were the best…. Then I actually listened to some Elgar and fell in love with it. It’s great music, and they really don’t know it here. I can’t even believe I brought the Elgar Enigma Variations here [to Karelia], because it’s such a well-known work. The same was true with works by Walton, Vaughan Williams, and Britten.”

Stravinsky takes his ambassadorial role seriously. But he said it’s also easy to be pigeonholed by managers and concert audiences: “For example, Gergiev is well known for his ‘Russian’ Mahler, and I’m known as an ‘English music’ conductor.”

These days, he prefers to work in Russia rather than England because there is a sense that anything’s possible. “In Russia, you really can do anything you want if you set your mind to it, which is really important to me. I can program the British composer Thomas Adès, Bartók, Stravinsky, Mahler…. Of course, career-wise, you must never take your eyes off the ball in terms of trying to work with the best musicians, who are actually based in the West. So it’s a balance.”

Stravinsky’s pride in his orchestra, which he views more as a collaborator than an instrument, is obvious. “The musicians make the majority of the effort. The conductor is there just to show the way. I think conductors these days have a lot less responsibility in terms of how the orchestra actually sounds. Over the last 50 years, orchestras around the world have improved so much. I think it’s important to have an artistic vision more than anything else. Musicians respond better when they’re guided lightly. The Karelia Philharmonic is one of the best regional orchestras in Russia. We have a conservatory here, so there’s always a nice flow of musicians. We’re also one of the poorest, since we don’t get any support from big business, which is a bit unfair. But the musicians are so good they keep things moving along.”

Stravinsky still refers to Russia as a foreign country. Yet it’s clear Karelia, and maybe even Russia, is becoming his home. “I came to Russia at the age of 23 and I thought, ‘I’ll be in Russia for about a year to get my technique.’ But I found I couldn’t leave, and I thought there must be a reason for that. I really love it, and I think of myself as Russian. I can’t see myself going back to England in the near future, and I think that’s because there’s something in here.” He pointed to his chest. “They talk about the russkaya dusha [Russian soul].  It’s very strong.”

When asked how he had come so far so fast in a profession traditionally associated with old men, he didn’t appear to have an explanation. All he could say was that he still had much to learn. “I don’t believe in turning to conducting after having spent most of one’s time as an instrumentalist. It’s not the right way. It’s so hard, and I’m not talking about the stupid beating; I’m talking about knowing how to make an orchestra sound better… There’s no such thing as a young conductor. I’m [not as good as] anyone who’s 40 or older.”