Kirillov: Citadel of the Russian North 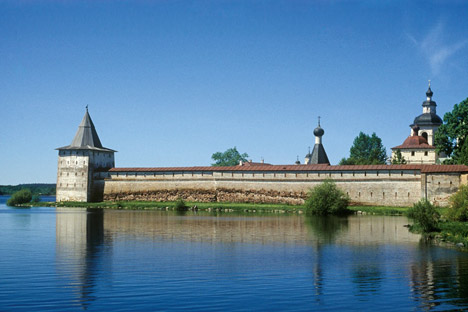 In all of Russia, there are few more impressive sights than the walls and massive towers of the St. Kirill-Belozersky Monastery.

Throughout the great forested zone of the Russian north, waterways have long served as the main arteries of trade and commerce. Among the most important of these links are the White Lake (Beloe ozero) and the Sheksna River, which flows south from the lake. Modern reservoir and canal construction have altered the appearance of the Sheksna, but it still serves as a link in the major transportation route connecting the Volga River with Lake Onega.

Each summer, thousands of tourists travel the river in cruise boats that operate between Moscow and St. Petersburg. Most of these vessels dock at the village of Goritsy, from which buses transport visitors some 10 kilometers to the east to Kirillov.  The stream of visitors do not come for the charming town dotted with 19th century houses, but for its extraordinary fortress-monastery, founded in 1397 by Kirill, a Muscovite monk of noble origins.

In all of Russia, there are few more impressive sights than the walls and massive towers of the St. Kirill-Belozersky Monastery. Its location, on Siverskoe Lake near the Sheksna River, was both remote and strategically important. With the revival of monasticism in Moscow during the 14th century, pioneer monks sought remote areas as a test of their ascetic faith and dedication. The nearby monastery founded at almost the same time (1398) by St. Ferapont is another excellent example. At the same time, Muscovite princes supported these efforts not only to spread and maintain the Orthodox faith, but also to consolidate Moscow's territorial expansion into the rich forests of the far north.

In the early 15th century, the St. Kirill Monastery, formerly dedicated to the Dormition of the Virgin, played a major role in supporting Moscow’s dynastic stability. As a consequence, the monastery received major donations, and by the 16th century, it was one of the largest Russian monastic institutions, second in size only to the Trinity-St. Sergius Monastery near Moscow. The first brick and stone church in the complex was the Dormition Cathedral, begun in 1496 and expanded with small picturesque attached churches over the next two centuries. The cathedral interior has a grand icon screen and 17th-century frescoes that are still under restoration.

One of the main patrons of the monastery was Vasily III, grand prince of Moscow, who in 1528 made a pilgrimage to the monastery with his second wife, Elena Glinskaya, to pray for the birth of an heir. Their prayers were answered; in 1530, Elena gave birth to a son who would become Ivan IV (the terrible). In the early 1530s, Vasily sponsored two brick churches in the monastery, including the Church of John the Baptist, which became the nucleus of another monastery. Thus, the St. Kirill-Belozersky Monastery is actually composed of two monasteries, as well as a settlement for lay workers protected by an ever-expanding system of walls. At the beginning of the 17th century, these walls enabled the monastery to defend the area against mauraders during the period of civil war and foreign invasion known as the “Time of Troubles.”

A major boost in the monastery's fortunes occurred in the second half of the 17th century, when Tsar Alexis Mikhailovich Romanov decided to rebuild the monastery as an impregnable monument to Moscow's dominance in the north.  At that time, the most likely enemy was Sweden, which had already gained considerable territory held in medieval times by the Russian city-state of Novgorod. If Sweden attempted a deep invasion, the St. Kirill Monastery would stand as a firm obstacle. In 1653, Alexis decreed the expansion of the monasteries walls and towers, which rose over a period of several decades throughout the latter part of the 17th century.

Ironically, no hostile army ever came close to the citadel that had been rebuilt and expanded at such great effort. Its walls and towers only served as testimony to the Russian ability to erect masonry structures of enormous extent during the late medieval period. With his victories against the Swedes in the early 18th century and the founding of St. Petersburg (1703), Peter the Great fundamentally altered the geopolitical position of the Russian north. The subsequent declining importance of the St. Kirill Monastery led to its neglect and decay during the 18th and 19th centuries.

In the late 19thcentury, however, a revival of interest in Russia’s medieval heritage led to restoration efforts that continued during the early Soviet period. In 1929, the first museum was established in the monastery. The onslaught of Stalinist industrialization and ideological repression undercut much of this work and led to great material losses, such as the melting down of the monastery's remarkable bell ensemble – one of the most important in Russia.

Only after World War II did the Kirill-Belozersk Museum revive its cultural potential.  The territory of the monastery museum also became a haven for two log structures from the surrounding area: a windmill and the Church of the Deposition of the Robe of the Virgin from the region of Lake Borodava, whose basic structure has been dated to 1485 and is thus one of the oldest surviving log structures in Russia.

The St. Kirill-Belozersky Monastery has become a major repository of Russian cultural treasures, and there are many signs of progress. The museum now has an excellent gallery of historic religious art, and part of the complex has reverted to the Russian Orthodox Church. In 2012, the monastery will celebrate its 615th anniversary, a mark of its enduring importance in Russian history.