SCO on an upswing: India calling 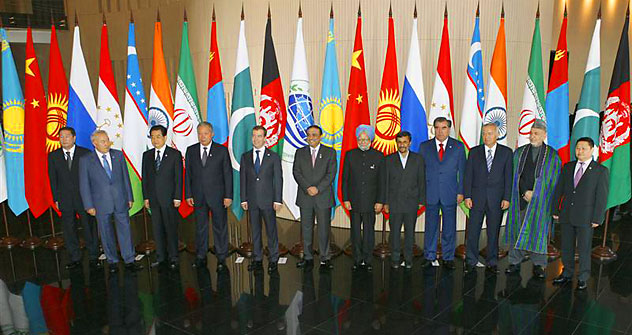 Manmohan Singh and Dmitry Medvedev before the meeting of the Council of Heads of the SCO member-states along with the Heads of the observer-states, June 16, 2009. Source: RIA Novosti

The 10th summit of the SCO promises to be a milestone as the six-nation regional body, dominated by China and Russia, embarks on an ambitious expansion plan. India has growing stakes in joining the SCO, specially in view of the Afghan endgame.

The 10th summit of the six-nation Shanghai Cooperation Organisation opens in Kazakh capital Astana June 15. The regional body, which is focused on fighting the Trinitarian evils of extremism, terrorism and separatism on the one hand and on creating a web of regional prosperity on the other, is on the verge of transformation and expansion. Mongolia, Iran, Pakistan (all observer states) have expressed their strong desire to become full members of the organisation. Of late, India has also showed its keenness for getting full membership. India has shown keenness on sharing security concerns of the region with SCO and also work closely with the SCO in Afghanistan. Though SCO is not interested in sending troops to Afghanistan as they had bitter experience on this issue during the Soviet times, which they would not like to repeat, but as most of the SCO member/observer states share the common border with Afghanistan it becomes essential for the SCO to maintain peace and stability in Afghanistan. Hence, in this regard the SCO appreciates India's cooperation. Afghanistan has already submitted its application for getting membership in the SCO and it will be discussed at the Astana summit. There are many countries, which would like to become full members of the SCO. There are also countries, which want to join the organization both as observers and partners in dialogue.  All such requests will be considered on June 15 in the Kazakh capital.

India and Pakistan are regarded as favorites for joining the SCO as the full members. The UN sanctions effectively block Iran from joining the SCO. According to SCO norms and rules a country which wants to become a member of the SCO cannot be subject to UN Security Council sanctions. No SCO candidate member apart from Iran has the U.N. sanctions applied against it. India’s full membership in the SCO would help to strengthen the fight against terrorism and the drug’s trafficking. India's representation in the summit this time would be strong enough to show New Delhi’s significance and interest in the organisation. India played an important role as an observer state in strengthening the Shanghai Cooperation Organisation since 2005, when India joined the SCO as an observer at the fifth summit meeting held in July 2005 in Astana. India shares with SCO common positions on many politico-security issues and concerns of the region. India has good relations with all SCO members; hence, prospects for future cooperation are very bright.

Presently, the SCO prioritises peace and security issues, mainly, dealing with terrorism, separatism and focuses on making the whole region a stable and in predictable situation. Over the past few years the regional body has emerged as the most influential multilateral institution in the region; hence, India is in a comfortable position to work with it. So far, India has not made clear policy towards this organisation, inspite of the fact that it is important for India from the geostrategic, economic and security point of view. So far the attitude of the Indian policy makers and analysts towards this organisation had been very relaxed. However, the growing importance of the SCO makes it essential for India to increase dialogue and engagement with this body and strengthen its position within the forum. A strong India-SCO relationship would bring major trade and investment opportunities for India with other SCO states, as SCO is gradually realising its ambitious economic integration agenda, including the formation of a free-trade zone and setting-up rules for the free movement of goods, services and technologies within SCO member states. India's aim of obtaining energy security could be served through SCO forum, which might not be possible in isolation.  India, along with other SCO states, can contribute to increasing the regional stability. India should recognise that all the Central Asian states as well as Russia and China view the SCO as a positive and important vehicle for their long-term growth and interest in the region. Hence, in the long run, India through dialogue and better cooperation with SCO might be able to fulfill its own interest within the region

The SCO's decision to expand its membership involves regional integration processes and can establish strong hold and name in Central Asia, South Asia and in the Gulf. The SCO, which is widely seen as a counterweight to NATO's influence in Eurasia, has been trying to address the security issues and expand economic and energy projects of the region. The interest of the observer states like India and Pakistan in obtaining the SCO's full membership is mainly for the politico-economic as well as security reasons and the need to build an 'Asian policy'. The SCO has agreed to deepen pragmatic cooperation with all the members including observer states in areas of common interests. It was suggested that cooperation with observer states in areas of countering terrorism, solving growing environmental problems, food security, energy security and economic cooperation including banking will be strengthened further.

There is a belief that the future of the regional body will depend on how successfully it is able to deal with the issues of economic as well as cooperation in the security sphere among its members and observer states. Therefore, economic and security issues and concerns within the SCO framework is likely to take more prominent place in the coming years. Many analysts and area experts would view the SCO summit (on 15th June 2011) in Astana with keen interest.

An expanded SCO will be of great benefit to South, South-West and Central Asia. Some of SCO States like Russia, Iran, Kazakhstan and Uzbekistan possess vast energy resources and hydrocarbon fuel. Tajikistan and Kyrgyzstan have immense hydroelectric energy resources, which, if jointly explored and rationally used, could tangibly improve the energy security of all the countries in the region.

The SCO has matured as an international organization and grown its influence. Now the international community is showing a greater interest in the SCO. Presently, it seems to have created some sort of competition with other organizations in the international arena. But SCO members feel that it would not be right for the organization at the moment to engage in any competition but instead continue positive constructive work, though some member states pointed out the obstacles for further expansion of SCO stressing that the organization's charter does not provide for the inclusion of new members. However, within the organization there appears to be an eagerness to expand the SCO, which is increasingly seen as a counterbalance to western influence in the strategically located region. However, in today's world of integrated security, no region can develop without taking into consideration the role of strategically placed countries that may lie outside the boundaries of that region. This factor has become the driving force behind all regional organizations. The SCO cannot be an exception to this rule. By accepting Iran, Mongolia, Pakistan and India as observers in 2005, the SCO expanded the scope of its activities and this process has to be taken to its logical end.

The SCO is trying to establish its importance and its regional and international status through different kinds of multilateral and bilateral co-operation or consultations, as well as through conference mechanisms. It has strengthened mutual trust and good-neighbourliness among member and observer states. It is trying to promote co-operation among its member and observer states in the sphere of security, political, trade, economic, scientific-technical, energy and transportation spheres. The SCO is also working to fight against terrorism, separatism and drugs trafficking and striving to create a reasonable new international political and economic order. Its current approach is to emphasise on consolidation, long-term planning and avoiding marginalisation. The full membership of India and Pakistan could bolster cooperation in the SCO in several fields. SCO's approach should be to convert entire Eurasia into an energy and economic powerhouse.