Alexander Dym – “Maybe there will be no words at all” 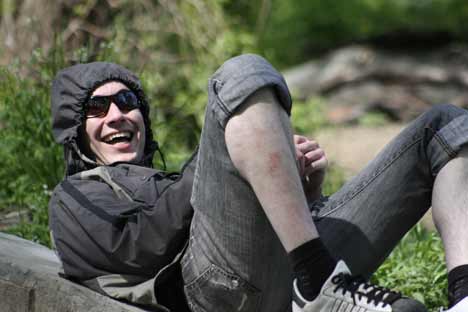 Alexander "Lightsmoke" Dym: "Always fight till the end. And everything will be yours."

I am following up on the idea that modern fiction, especially its branch presenting the mood of youth subcultures—the voice of the street that determines the future of opinions and intellectual ferment—is living somewhere behind the scenes.

It`s not a secret that there is a new generation of young Russian writers. While they cannot get publisher’s officers to see the value in their writing, a riot of growth has exploded on the Internet, where works blossom and find their own audiences.

In the 1970s, a number of British authors gathered around the New English Library, where they were producing subculture novels at a rapid pace. In the 1990s, their tradition was picked up by authors such as Irvine Welsh, John King, Stewart Home and others, who were trying to catch and reflect on real changes in society and didn’t care what mainstream readers in salons thought.

We are having roughly the same situation now in Russian literature. New heroes have appeared, and they are writing about what is going on here and now. These heroes can create a real cultural explosion, like the Beat Generation breakthrough in United States. Among those heroes will be without doubt Alexander Dym (Lightsmoke), the author of the two volumes of “The Diary of Moscow Padonok” (the confessions of a Russian football fan) and “Violence.Ru,” a non-fiction history of street violence in Russia.

The success of “Moscow Padonok” was so amazing that all the main book wholesalers insisted on a speedy re-issue of it. This re-issue of 5,000 copies of each volume was produced in December, during a huge crisis in the publishing market. “Moscow Padonok” has become an event on the fiction scene, an event that has mostly been ignored by big mainstream critics, who are trying not to sully their reputation with the floods of blood spilled on the pages of this story and its frank ideas.

Counterculture literature is such a unique space that is nearly impossible for the uninitiated to intrude. It is the format without any formats where real artistic breakthroughs are always happening. It exists autonomously of everything, and incorporates people who have different sources of inspiration, various kinds of stimuli, drives and motives.

Dym, a former member of the infamous CSKA football fan club “Yaroslavka,” is sitting in front of me. “For me,” Dym says, “everything happened accidentally. I was keeping a diary online and was writing about my life, describing it day by day, was getting comments and not thinking about any book. But the more I wrote, the more people were commenting it, spreading links in forums and blogs.

“With my diary, I have shown a certain period in the life of an ordinary young Moscow guy, who is drinking heavily, smoking, fighting and not respecting authority. The book pushed through by itself without my participation. People were stirred by its sincerity, because I was writing only about what I saw or did, without any embellishments. I was not trying to create an image of some hero; Russian street subculture became the hero, needed and asked for.

“For example, the subculture of football hooligans has become a professional sport, with its own amateur and professional teams. The very essence of this subculture is not the same as it was 10-15 years ago.  If authorities want to shut down the football fan movement, they could shut it down in one week. They have all the information; they can simply say that they are putting 50 central figures in prison, and that should be enough. Many now are broken physically, for such a life doesn’t do much for your health. Many stepped aside and left the movement, some passed away, some are sitting in prisons. The young kids prefer to party with drugs and booze rather than to stand in bloody fights for the honor of their clubs. The meaning of street honor is growing dim. The atmosphere of the old glory days has gone.

“Can strengthening the punishments for hooliganism and violence in stadiums help the fight against football hooliganism? Yes, we will follow the English way, creating total police control: video cameras everywhere, ticket sales requiring a passport, if you break the law, you`ll be outlawed from stadiums, you`ll have troubles at your job, you`ll be turned into a social outcast. The authorities desperately need to create a respectable image for the 2018 World Cup.

“But look at Lokomotiv. Their own security service is actively working with their fan clubs, especially at away games, and the risk of serious incidents is getting lower, all violence has moved a long way from the stadium. But now football fans can`t avoid politics. The events on Manezh Square made sure of that. It was a spontaneous social blow up, but the authorities sometimes sponsor or secretly encourage aggressive subcultures. So, one of the Spartak fan groups sold out.”

I ask Dym about the authors who influenced him.

“All my creativity was influenced mostly by classics,” he says. “For example, Jack London - `White Fang,’ `The Call of the Wild.’ Things that I read as a kid I have re-read many times after, and they still have a strong influence on me. Recently I  re-read Theodore Dreiser’s ‘The Financier’ and Hermann Hesse’s `Steppenwolf.’ Classics can be re-read at any age; something that you read at 17 and the same thing you read at 30 gives you a different life experience. You are uncovering some strata all over again, and are finding new ones, that you couldn`t understand, being too young.

W.S.Burroughs, H.S.Thompson, John King - yes, I took a great interest in them, but I`m not sure that their writings will be still relevant in 10-15 years. They have appeared at the right moment in time, on the body full of soul wounds of nuclear age. They became an event in the context of a certain time. If up to the 20th Century, fiction was dominant, now it’s the time of non-fiction, documentaries. What will be next it is hard to guess, maybe there will be no words at all.

“It’s new times, but people are still the same. And the commandments are the same, but the sound more tough, more street-like: Don`t betray or cheat a friend even when there is much to gain from it. Don`t run from a fight involving your friends. Always fight till the end. And everything will be yours.

I believe in it.”