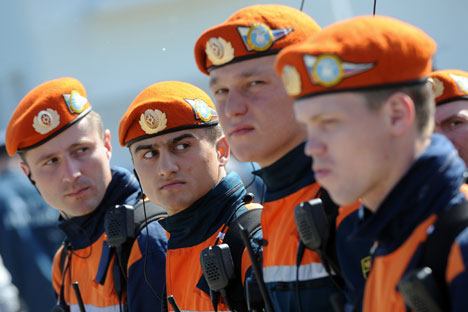 At the annual safety and security expo in Moscow, the Emergency Situations Ministry displayed new equipment and new techniques.

The end of the world came to Noginsk last week. A dozen natural and manmade disasters hit the town the same day, including a major rail accident, a fire at a petrochemical plant, a hostage situation, and – as if tailor-made for the movies – a plane crash. But fortunately for the Moscow Region town, rescue crews from the Ministry of Emergency Situations (EMERCOM) dealt with all the incidents admirably, which was, after all, the point. For the fourth year, Noginsk hosted the field exercises for the Integrated Security Expo.

The annual event consists of two parts: a week-long, large-scale exhibition at the All-Russia Exhibition Center (VVTs) in Moscow and a demonstration at the EMERCOM training grounds. And while at the Exhibition Center, the latest equipment is displayed in all its shiny glory, at Noginsk, the rescue trucks and robots get down and dirty.

This year, the exhibition’s organizers chose to focus on the importance of integrated security systems. In a real disaster, putting out fires is only half the battle – after the immediate danger has passed, emergency responders must care for the victims. They are responsible for securing food and medicine, establishing evacuation routes, and stabilizing the damaged infrastructure.

While combining first response procedures with care for victims is an admirable goal, the demonstration put on at Noginsk seemed instead to integrate a folk festival with a Hollywood blockbuster.

At Noginsk, the EMERCOM crews extinguished everything that could theoretically catch on fire; they helped everyone who needed the tiniest bit of assistance. In one instance, a small house caught fire and EMERCOM responded with the immediate dispatch of a fire crew. In recognition of the relative simplicity of this incident, the firefighters arrive at the scene in a horse-drawn cart with a hand pump. The fire is extinguished and peasants wearing traditional hats with ear-flaps (despite the fact that the temperature is +22° C) are rescued. The farmers are still happy; their property is saved, and all the family members are alive and well.

The next fire, which started just a few minutes after the previous one, proved more of a challenge. This time, the fire swept down on an industrial complex. One horse-cart can hardly cope with this situation so several IL-76 and Be-200 airplanes fly over the heads of frightened horses, reporters, Duma deputies and state officials. Each airplane discharges tons of water tinted in the Russian national colors of red, blue and white. The fire fades away as the audience applauds.

Then, rescue crews are called upon to help with some more difficult tasks. They must evacuate passengers from a crashed airliner, help victims of a railroad accident, take out a terrorist who has hostages, and – finally – parade in front of EMERCOM head Sergei Shoigu and smile at reporters. The brave emergency responders handled all these tasks brilliantly.

Shoigu summed up the performance of the EMERCOM rescuers, declaring that Russia is prepared for its "Fukushima." It’s unlikely, however, that the emergency teams will spend their days in boredom waiting for an atomic meltdown. The wildfire season in Russia has already begun, and in its demonstration, EMERCOM has proven that it can cope with a range of problems – as long as they are no worse than field exercises.

Russia’s Emergency Situations Minister Sergei Shoigu opened the Integrated Safety and Security Exhibition 2011 in Moscow with the less-than-optimistic message that disasters are on the rise – both globally and locally. “The past couple of years have seen a number of serious events, with seven major disasters that normally occur once in 1,000 years happening over just one year,"Shoigu said in his opening address.

Shoigu named only four of the seven disasters in his speech – the August 2010 Russian peat fires, the catastrophic flooding in Pakistan, last winter’s freezing rains, and Japan’s tsunami – but experts were quick to suggest accidents worthy of a place among the top seven: earthquakes in Haiti, Chile, and China and the Deepwater Horizon oil spill in the Gulf of Mexico were among the most frequent suggestions.

Although at some level it is impossible to prepare for this kind of disaster, the new equipment on display at the annual expo left no doubt that Russia’s first responders are trying to ready themselves for whatever disaster might arise.

The Duma deputy believes, however, that the focus should be not so much on developing new technology as on implementing it on the ground as quickly as possible.

While earthquake are the most deadly type of natural disaster worldwide, Wildfires are Russia’s most immediate threat, and fire safety was a highlight of this year’s exhibition. Fires destroyed some 2,000 homes last summer and put many strategic facilities at risk, including the nuclear center at Sarov and the Novovoronezhskaya Nuclear Power Plant. At this year’s exhibition, engineers presented equipment capable of putting out any kind of fire, no matter how difficult. Shoigu said that much of the equipment on display at the expo would become part of the ministry’s arsenal in the coming year.

The ministry already has the need for advanced fire-fighting equipment. As of late May, 131 fires were reported in Russia, compared to 120 this time last year, and they have already engulfed some 390,000 hectares. As before, Yakutia – the enormous republic in Russia’s Far East, holds the top spot in the fire threat rating. The region is currently battling several dozen wildfires with the help of 1,800 people and 174 pieces of equipment. Yet “integrated safety” novelties are nowhere to be seen: The firefighters are fighting the fires the old-fashioned way.