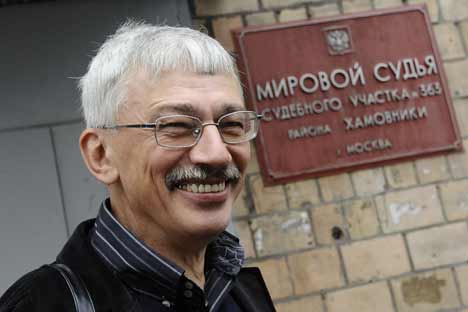 In a surprise verdict, a judge has declared a human rights activist not guilty of slandering the Chechen president.

A judge in southwest Moscow ruled on Tuesday that human rights activist Oleg Orlov was not guilty in a slander case involving Chechen leader Ramzan Kadyrov.

Orlov, the head of the Memorial human rights group, was charged with defamation last July after he publicly accused Kadyrov, formerly a Chechen gunman, of being behind the murder of Chechen rights activist Natalia Estemirova in 2009.

Kadyrov, 34, who called Estemirova a "woman without honor or shame" shortly before her death, has denied the allegations.

Estemirova, 51, was kidnapped early on July 15, 2009, in Grozny, the capital of Chechnya, and her body was found later in the neighboring North Caucasus republic of Ingushetia.

Estemirova recorded hundreds of cases of alleged abuse against civilians by the militia under control of ex-militant turned Kremlin loyalist Kadyrov.

Last year, investigators said Estemirova was killed by a militant named Alkhazur Bashayev, who was allegedly angry at what she wrote about his armed group.

Kadyrov's lawyers said they would appeal the ruling.