SCO is not an elite club – Medvedev 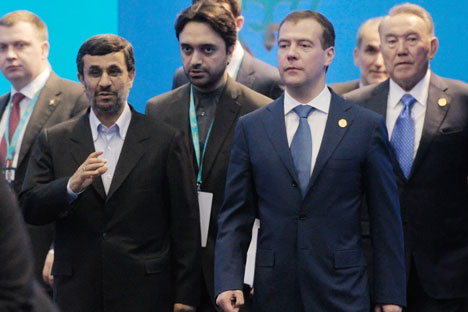 The Shanghai Co-operation Organization (SCO) is “not an elite club” and is open for interaction with non-member states, Russia’s President Dmitry Medvedev has said.

Medvedev is in the capital of Kazakhstan, Astana, along with other leaders of the SCO member states, for the tenth anniversary summit of the grouping.

Founded in 2001, the SCO unites Kazakhstan, China, Russia, Kyrgyzstan, and Tajikistan, while India, Mongolia, Iran and Pakistan hold observers’ status. A decade after the birth of the organization, the participants of the Astana summit are set to discuss what has been achieved so far and outline the main directions for the SCO’s future development. Also on June 15, Kazakhstan will pass the rotating chairmanship of the union to China.

President Medvedev, speaking at the session, said that the SCO is open for co-operation with non-member states.

“It is not an elite club, but an organization that is ready to co-operate with other countries,” he noted, as cited by Interfax. Medvedev believes that the adoption of the Memorandum on Responsibilities for countries applying for membership will become an important step in development of the SCO.

The president also noted that Moscow supports the idea of establishing stronger and multi-aspect co-operation with Afghanistan. The Islamic Republic is seeking an observer status in the organization and has submitted a respective application.

“Afghanistan is our neighbor and its participation in the SCO activity could be closer,” Medvedev pointed out, adding that other summit participants share the same view. He went on to say that the security of SCO states to a large extent depends on the political stability in Afghanistan.

The republic’s President Hamid Karzai – who is also in Astana – expressed hope that the SCO would open its door for Kabul and thanked Moscow for urging Afghanistan to file the application.

In the past decade, the group of six states has lived through a chain of dramatic events, beginning with the 9/11 terrorist attacks, moving through the Global Financial Crisis, instability in the Middle East, Kyrgyz uprising in spring 2010, and the so-called Arab Spring – a wave of protests and revolutions that recently swept through Arab world.

Summing up the results of the SCO activities, President Medvedev stated that the “strategic” decision to found the unity was “correct and farsighted”. Since 2001, the SCO has gained a foothold as an important forum which is recognized by “influential” international organizations. Strengthening security of the member states and their people remains one of the key tasks of the unity, the Russian president said, adding that this topic was high on the agenda during the summit session.

In particular, the participants discussed a whole range of measures to counter terrorist threats, including the strengthening of the Regional Anti-Terrorist Structure (RAS). Medvedev urged his partners to assign only highly-skilled personnel to work in the RAS.

"Russia has made a number of decisions to enable our representatives who will be assigned to the RAS to have special training. I believe that our other colleagues should also follow suit," he said. Medvedev added that the participation of observer-states and other partners in that work would also be crucial.

Countering drug-trafficking, information security and the development of economic ties between the SCO members were also discussed in Astana.

Yet another topic touched upon at the summit session was the sanitary-epidemiological security of the vast territory covered by the SCO. President Medvedev urged the partners to co-operate on the matter, adding that the recent events in Europe – the deadly outbreak of E. coli – prove that it has now become critically important to joint efforts in order to prevent such infections spread in the future.

The anniversary summit began with a meeting of member-states’ presidents: Kazakhstan’s Nursultan Nazarbayev, Roza Otunbayeva of Kyrgyzstan, Hu Jintao of China, Russia’s Dmitry Medvedev, Tajikistan’s Emomali Rahmon and Islam Karimov of Uzbekistan. Later they were joined in by the heads of the delegations from observer states, including Iranian President Mahmoud Ahmadinejad and Pakistani head of state Asif Ali Zardari.

Among the guests of the gathering are Afghanistan’s President Hamid Karzai and leaders of the United Nations, the Commonwealth of Independent States (CIS), the Collective Security Treaty Organization (CSTO), and, also the Association of Southeast Asian Nations (ASEAN).

On the sidelines of the summit, the leaders will also hold a series of bilateral and trilateral meetings.