Should NATO go the way of the Warsaw Pact? 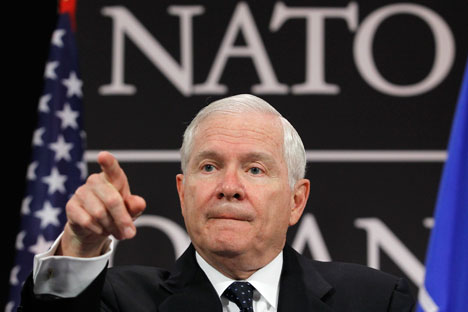 As he prepares to retire as U.S. secretary of defense, Robert Gates has suggested that the U.S. can no longer be NATO's financial backer.

Retiring U.S. Secretary of Defense Robert Gates made what looked like a farewell speech last week. In it, he castigated the military leaders of NATO and its European member states. The former, for their inability to conduct effective military operations in Afghanistan and Libya; the latter, for their reluctance to invest substantial human and financial resources in NATO, expecting the United States to go on bearing most of the burden. The U.S. increasingly resents this kind of attitude on the part of its allies, particularly now that the country is facing enormous economic and financial problems.

Gates is leaving office and so does not feel the need to mince words. In his recent comments, he has plainly warned Europe that it had better revise its policy of obtaining security at other people’s expense – otherwise future U.S. political leaders, those for whom the Cold War was not the same kind of formative experience that it was for Gates’s generation, may decide that U.S. investment in NATO brings too scant a return and is not really worth it.

NATO was originally set up to guard against the military expansion of the Soviet Union and other communist nations. The alliance did this quite effectively, and once the Soviet Union had disintegrated and the Warsaw Pact dissolved, many sensible politicians and experts proposed disbanding NATO and creating a new global security system – with Russia’s participation – to cover the planet from Vancouver to Vladivostok.

Lamentably, these ideas are yet to be implemented. Moreover, NATO has continued to swell and become ever more unwieldy and inefficient. In Gates’s words, NATO has degenerated into an alliance made up of those who can and will pay the price and bear the burden of membership, and those who enjoy the advantages of being NATO members, but are loath to share the risks and expenses. The proportion of U.S. participation in NATO spending has risen to 75 percent, which is vastly more than at the peak of the Cold War, when Washington kept hundreds of thousands of servicemen all over Europe. Obviously, the U.S. Congress will sooner or later rebel against attempts to shift the entire financial responsibility for the alliance to U.S. taxpayers.

By all accounts, the recent events in Libya proved the last straw for Gates. He has complained bitterly that the most powerful alliance in history is performing poorly against a medieval regime in a sparsely populated country. The alliance operation in Libya is already short of ammunition and yet again wants the United States to make up the shortage. In March, all 28 NATO members voted to move ahead with the mission in Libya, but fewer than half of them took part in it; just under a third declared their willingness to participate in assault operations.

While the Soviet threat was a reality, the United States had no alternative but to bear the financial responsibility for the alliance, but today such generosity is simply beyond the country’s means.

Unfortunately, and contrary to all naïve hopes, the world has not become any safer since the collapse of communism. New threats have emerged, possibly even more perilous, but totally different in nature. Cold War-era opponents frequently find themselves on the same side of the barricades, and given all that, the most obvious solution, despite all the ideological and value differences, could be NATO’s rapprochement with the Shanghai Cooperation Organization (SCO).

The main threats to world security are currently coming from the Middle East where Al Qaeda, the Taliban and other extremist organizations are having a field day. Iran and Pakistan are also causing huge problems, but they are included in SCO meetings as observers and make no secret of their desire for full membership. On the whole, this might result in greater peace in the region, since Russia, China and eventually also possibly NATO would then have a better chance to hold in check radical and unstable regimes.

Cooperation between NATO and SCO would also encourage further efforts to form an energy club in Central Asia, which could help iron out problems between Russia and the United States over energy flows.

Some steps in this direction have already been taken. In mid-March, Robert Blake, the U.S. assistant secretary of state for South and Central Asian affairs met with SCO officials to listen to their assessment of the situation in Central Asia situation. And voices are occasionally heard in Washington in favor of such radical ideas as U.S. accession to the SCO. This is about as unlikely as Russia joining NATO, but Russia and the U.S. should display their leadership qualities and convince their SCO and NATO allies that rapprochement and cooperation between these apparently disparate entities commonly seen as rivals would be the most mutually beneficial and promising line.

Edward Lozansky is the president of the American University in Moscow.