The smart power of the SCO 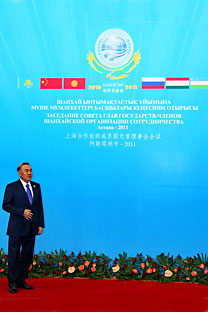 The Shanghai Cooperation Organization, or SCO, whose six members are China, Kazakhstan, Kyrgyzstan, Russia, Tajikistan and Uzbekistan, marks its 10th anniversary today, on June 15, with a summit in Astana.

This organization has lived through 10 dramatic years of world events, beginning with the terrorist attacks of 9/11, followed by the global economic crisis of 2008 and, most recently, the Arab Spring.

The world is still adapting to the collapse of the Cold War bipolar system, which has resulted in a strategic vacuum that has left many problems of international security unresolved. In this context, the SCO has played a vitally important role as a force for stability and retains significant potential to contribute further to maintaining global security.

Between 2004 and 2011, the SCO’s Regional Anti-Terrorism Structure prevented more than 500 terrorist acts and saved thousands of lives. SCO countries were also an important factor in maintaining global financial security through their gold reserves worth $3.6 trillion at the end of 2010.

The unique feature of the SCO is its ability to use political and diplomatic methods for resolving international problems. This “smart power” makes the organization attractive to others. United Nations Secretary-General Ban Ki-moon has referred to the SCO as an increasingly important instrument of security and integration in the Eurasian region.

Over the past year, Kazakhstan has chaired the SCO. For six months of this time, we were also chairing the Organization for Security and Cooperation in Europe, giving our country unprecedented leadership in global security affairs. During our SCO chairmanship, we placed emphasis on balanced development in the SCO’s three main areas of activities: economic, security and cultural cooperation.

Our main focus has been on strengthening regional and global security. While, the SCO is not a military organization, it has to confront the harsh realities of a multitude of local and regional “hot spots” as well as the issue of combating the “three evils” — terrorism, separatism and extremism. Under Kazakhstan’s chairmanship, the SCO held the anti-terrorist military exercise “Peace Mission 2010” with 5,000 troops from five member states.

Kazakhstan and the SCO have consistently pushed for a resolution to the problem of Afghanistan. We believe that the prosperity of Central Asia and the surrounding states can only be achieved through a strong, independent and stable Afghanistan. Although the SCO is not directly involved in military operations in Afghanistan, it is providing essential support in the areas of transportation and military-technical support. SCO countries are also involved in infrastructure-building and humanitarian projects in Afghanistan. It is possible that the SCO will assume responsibility for many issues in Afghanistan after the withdrawal of coalition forces in 2014.

In addition, the global trade of narcotics represents a serious threat to regional and global security. The lion’s share of narcotics distributed on the market originates in Afghanistan. The SCO has developed capabilities for dealing with the drugs problem, and Kazakhstan has played a key role in producing a five-year anti-narcotics strategy for the SCO that we hope will be adopted at the summit.

SCO countries are also at the sharp end of religious radicalism. It is no exaggeration to say that in having to manage these risks, we act as a shield protecting many other regions of the world, including Europe and the trans-Atlantic community as a whole. There is no solution to the problem of radicalism based on military force. It is vital that the world community fights the fundamental causes of radicalism and terrorism and not its consequences.

Kazakhstan’s chairmanship has also brought progress in the economic sphere. Nevertheless, economic cooperation remains the SCO’s weak link. There is a divide between the economic potential of the SCO and its practical contribution as an organization. I am convinced that the main task for the SCO over the coming decade will be intensification of economic cooperation between its members, with an emphasis on broadening trade, creating new markets and diversifying transport corridors between Europe and Asia.

The SCO must think about its place in a complex and fast-changing world. We are not just living through a time of transformation; we are participants in a change of historical eras. Global centers are slowly but increasingly and inexorably shifting to the East. This no longer just means Asia, but also includes emerging countries that were previously considered part of the Third World.
Only the SCO can lead this process and give it direction. In particular, it can be an active participant in the radical transformation of global financial architecture. I also firmly believe that the SCO will also become an influential political center for decision making.

Over the past 10 years, the SCO has evolved significantly and transformed itself into a powerful and influential group of nations that can no longer be classified just as a regional organization. The challenge is to maintain this momentum and to make the SCO a valuable global actor, converting its huge potential into real influence on world events.

Nursultan Nazarbayev is president of the Republic of Kazakhstan.