"We hugged the trees to stop the bulldozers" 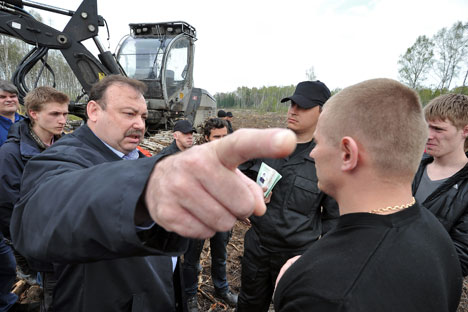 Activists continue to battle construction equipment in the Khimki Forest. Now they are traveling to Europe to look for support.

As fate would have it, the Khimki Forest sits close to Moscow, in the general direction of St. Petersburg, so when the powers that be concluded there was a need for yet another Moscow–St Petersburg highway, they decided to pave it straight through the forest. Was there an alternative route? Yes, there was, and a less expensive one at that, as far as road construction is concerned. But the highway was part of a bigger plan. The road needed to be built through the forest to eliminate it, so that it could be subdivided into plots and sold. After all, this is prime real estate in Moscow’s immediate environs.

But the Khimki Forest cannot be destroyed. Russia’s President Dmitry Medvedev decided as much on Aug. 26, 2010 when he signed an executive order suspending all roadwork on the Moscow–St Petersburg highway. He made this decision after Khimki residents, human rights activists, cultural figures, and ordinary Russian citizens who cared, fought the construction for three years. One activist was killed, several were maimed, forest rangers were beaten up, assaulted with vehicles, arrested, interrogated, jailed, intimidated, and had their property damaged.

The Khimki Forest cannot be destroyed. This is a decision by the president of Russia. Yet, at least once a week and sometimes more frequently, bulldozers appear at a wide clearing cut in the forest and start razing trees. And at these moments, young people, protectors of the forest, come running onto the clearing to hug the trees or stand in front of the bulldozers to stop them. Where do they come from? They live right there, at a tent camp close to the clearing. They lived there last year too, but the camp was then dispersed and felling increased. Now they are back.

Each time the bulldozers arrive, the forest protectors call the police and demand that they investigate the owners of the equipment. The bulldozers’ owners also call the cops and armed security. The policemen request that a statement be filed that will be reviewed later on. When the forest protectors insist that a crime in progress must be stopped and mention the president’s decision, the police consider themselves to be put under pressure and arrest the protectors, sometimes not only herding them into police cars but also beating them. They are subsequently released for lack of evidence that they have committed a crime. Under the best-case scenario, no arrests are made, but the owners of the bulldozers are allowed to drive them away, and so a few days later, it repeats all over again.

The Khimki Forest cannot be protected this way. The forest protectors live there in tents, putting their health and freedom at risk, only because they know that were it not for them, the forest would have been razed despite all of the president’s orders to the contrary. And once the forest is gone, the orders will no longer be relevant. “We‘ve seen it all here,” said Oleg Melnikov, a young Khimki Forest protection activist. “They knocked out my tooth, dislocated my jaw, and beat me. Only my nose is still intact. But we are not going anywhere, because if we do, nothing will hold them back.”

According to the forest protectors, “they” include the French company Vinci, which is involved in the motorway construction. On Mar. 2, 2010 Vinci representatives asked President Medvedev to “influence” the European Bank for Reconstruction and Development, which was reluctant to provide financing for the construction of the motorway out of its concern for “about 14 oak trees.” the French “greens,” however, supported the Russian campaigners for preservation of the forest more than once.

“I have neither power nor money, nothing at all,” said Evgeniya Chirikova, a mother of two, a regular resident of the town of Khimki and the leader of the Movement to Protect the Khimki Forest. She has been arrested many times and an attempt on her life was made. “But I live on this land, I feel sorry for this particular forest, and I’m doing everything I can to protect it. Don’t expect the authorities to have mercy on us – you won’t get any. If we don’t protect ourselves, nobody will do it for us.”

The Khimki Forest protectors understand that they cannot solve the problem by simply throwing themselves under the bulldozers, and they are doing all they can to raise national awareness. From June 17–20, a civic forum called Anti-Seliger will take place there. It is named in reference to the Seliger youth forum actively supported by the Russian Presidential Administration and the United Russia party. Oleg Melnikov is one of the Anti-Seliger organizers. According to him, the purpose of the forum is to let all active and creative citizens who are disillusioned with the political situation in the country speak out. Musicians, artists, writers, scientists and human rights activists will all have an opportunity to speak at the forum and talk to other participants. Russian State Duma deputies and parliamentarians from the European Parliament, whose became aware of the Khimki Forest problem due to the work of the European greens and Greenpeace, are expected to attend.

On June 20–21, the Khimki Forest protectors will visit Paris and on June 22–23, they will be in Berlin. They will speak there, and will have an opportunity to meet everyone who cares about nature’s fair treatment. Anyone interested is welcome to contact them by e-mail at ecmoru@gmail.com and savekhimkiforest@gmail.com.