A guide to post-soviet parenting 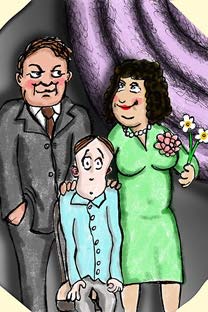 The current breakdown in communication between parents and children in Russia has been festering for decades — long before Perestroika: At least six generations of Russians were never taught how to bond, nor to be friends with their children.

This kind of nurturing has, until recently, been totally absent from Russian parenting; we are only seeing glimpses of it now that parents travel, read parenting books and observe that there are other ways to shape their children other than the way they were taught.

But there is a long journey ahead toward what I would call healthy, happy parenting.

As a rule, Russian parents don’t compliment their children enough. After a certain age, once the children enter school, parents are no longer affectionate in their language and tone. Yet the first step in nourishing Russian family life is for us to praise our children in ways we were never praised as kids ourselves.

Healing a History of Family Trauma

At least six generations have been taught to indulge their power at the expense of their children. During Soviet times, the only way a Soviet citizen - traumatized if not “spooked” by the State - could “feel the power” was by bossing younger people around.

Children were there to be controlled. As a result, several generations were raised as gods and slaves. There was no communication encouraged between family members, and the joy of family life was crushed.

In order to bond with children, Russian parents need to start forming a friendship as soon as their children are born, bearing in mind that they are no worse than you just because they weigh less or measure less in height. This is the kind of respect we have to start fostering in Russia. I will go even further by saying that children are smarter than adults!

If you can start perceiving children as fully legitimate members of the society right from the beginning, you are able to step into their shoes without bossing them around. Discuss any issues that may arise by listening to their arguments and proposing your own.

We expect our children to be better copies of ourselves, or some kind of trophy achievers. We have not learned that our children do not have to do what we do and like what we like. This concept of, dare I say it, God’s creation, an individual, is also almost completely absent in Russia.

What can you expect from a nation that has been deprived of its most educated people, including clergy, in the first quarter of the 20th century? The clergy was exterminated while “intelligentsia” of all sorts were deported from the earliest days after the revolution.

I am not sure I can name all of the reasons behind the malaise of the modern family. But it involves a great lack of trust and, secondly, failure to acknowledge the sacred rights of others. These same generations of people have been taught to take what belongs to others.

What did the Bolsheviks do in 1917? They implemented a policy of pillage. They forged the sense that someone else’s property is always, potentially, yours. This is one of the major causes of our lost moral compass, our cynicism. Why are we failing at becoming a properly capitalist country? Capitalism rests on two giants - on the recognition of the sacred right to private property and on trust. The trust element has fallen apart completely and the private property right is simply not part of our worldview.

In Russia, some think that someone else’s husband is potentially their property, and the same goes for someone else’s wife. Even at school, girls start sizing up other people’s pockets.

Let’s consider a woman who is young, attractive and married. In Russia, she might start looking for a new partner among her husband’s friends. If she entered the marriage as a way of getting on the “upward mobility ladder,” no one can expect her to be faithful and, subsequently, there can be no trust. She keeps looking for a wealthier spouse, while her partner may explore opportunities with women as objects, younger and more sexually attractive every time.

Of course there are many wonderful exceptions to these schemes, namely Russian romantics who get married in the hopes of spending their lives together. This kind of love and trust occurs in Russia as it does everywhere else. But just not frequently enough. It’s time to foster trust, and pass it on to our children.

Before it’s too late.

Elena Zaretskaya, a Doctor of Philology, is head of the Department of Social Sciences at the Russian Presidential Academy of National Economy and Public Administration and professor and creator of the “communicative education in Russia” concept and other communication techniques.