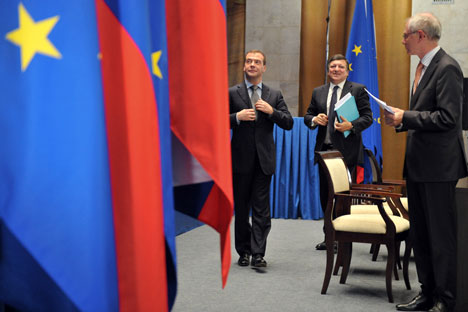 The latest Russia-EU meeting in Nizhny Novgorod announced the lifting of the vegetable ban, but accomplished little else of substance.

My colleagues in Brussels have ironically nicknamed the 27th Russia-EU summit in Nizhny Novgorod “the vegetable summit.” The ban on imports of EUgrown vegetables to Russia made headlines ahead of the meeting and also figured prominently in discussions between the participants.

Of course, the summit also discussed Russia’s accession to the WTO (which, by the way, would have allowed the parties to eliminate the “manual mode” in trade relations,) the roadmaps for the “four Russia-EU common spaces” (the economy, domestic security, foreign security, science and education,) a new basic agreement (the Partnership for Modernization), the outlook for visa-free travel, and the settlement of frozen conflicts in the CIS.

But all those subjects have been migrating from summit to summit for years. Some of them have been discussed at scores of various meetings and progress has been so slow that there is rarely any headline-worthy news.

When I first started covering the European Union in the mid-1990s, every summit was an important event, a milestone, a climax of anticipation and an opportunity to advance new initiatives. Russia’s view was that before long it would become just as successful and, eventually, prosperous as Europe. President Boris Yeltsin, not quite having mastered the appropriate terminology, used to state that Russia was “as the moment an associated EU member,” leaving Hans van den Broek, then European Commissioner for Foreign Affairs, scrambling for the right words when answering my questions, trying to avoid a rude “no.”

Today ranking officials and diplomats claim that the lack of any sensations or breakthroughs is good news: Russia-EU relations have become routine and a domain for experts, which means they are up and running successfully – similar, for example, to EU-U.S. relations, which also have some wrinkles to iron out. That said, few volunteer comments about differences in ideology and the role of values in the relationship. Russia today is perhaps a strategic partner for the EU not unlike China, albeit smaller in scale.

Russia is the only EU partner with which the union holds bilateral summits twice a year. This is more of a legacy of their 1990s “honeymoon” than a sign of real closeness. Could it be time to cut down on the frequency of these costly affairs? European Parliament Member Alexander Graf Lambsdorff and Fraser Cameron, Director of the EU-Russia Center in Brussels, recently raised this subject. Vladimir Chizhov, Russia’s Permanent Representative to the European Union, has been answering this increasingly frequently asked question by referring to a formality: This is what the Partnership and Cooperation Agreement, signed by President Yeltsin with EU leaders on the island of Corfu in 1994, provides for. The implication of this statement is that as soon as we complete negotiations on a new basic agreement, we’ll be able to revisit the issue of how often summits are held.

Apparently, both sides are happy about the present state of relations. Today they are better than at any other point over the past several years. Poland and the Baltic states, which used to initiate any kind of veto possible in the European Council, are determined to maintain as good relations with Russia as Germany does, and trade between Russia and the EU exceeded $300 billion last year. Russia mainly sells energy and commodities to Europe and Moscow doesn’t like the fact that the EU’s “Third Energy Package” has placed Gazprom in a not-so-favorable position. But this is survivable so long as there is an actual commodity to trade.

The European Union, busy saving weaker euro-zone members from default and dealing with the unexpected “Arab spring” to the south, an influx of immigrants, a disturbing shift to the right among the electorate and disagreements within the Schengen club, does not see advancing relations with Russia beyond the status quo as a vital priority.

Relations, including work on the Partnership for Modernization, could be described as being in stand-by mode ahead of Russia’s accession to the WTO. Should Russia eventually join the trade body, the expansive trade section of any future basic agreement would be scrapped.

Nevertheless, the participants in the Nizhny Novgorod summit noted progress on certain projects of the partnership program. But European Commission President José Manuel Barroso reaffirmed that it aims not only at Russia’s technological advancement but also at unlocking its entrepreneurial and creative potential. Doing so is impossible to achieve without democratic freedoms and an active civil society. The rule of law, he said, is a crucial condition for a rapprochement. While commending Medvedev on his efforts in human rights, European Council President Herman Van Rompuy said that the situation still leaves much to be desired.

Brussels and EU member-states are going to perceive Russia in the foreseeable future as an unattractive, non-democratic and unfriendly country. Yes, they need to work with Russia pragmatically, but without any illusions. This lack of an intangible “partnership spirit” is likely to count among its victims a potential Russia-EU free trade zone and, most definitely the dreams of visa-free travel to Europe so cherished by Russian urbanites.

The partners at this bargaining table are not equal. From the standpoint of the Europeans, visa-free travel to Russia doesn’t have the same value as it does vice-versa for Russians. Even leaving aside hypothetical and possibly far-fetched fears, it all boils down to the country’s appeal. The outlook may thus remain long-term for years to come. That is, unless Russia unilaterally offers Europeans something extremely important in exchange.

Alexander Mineyev is a Brussels-based correspondent for Novaya Gazeta.