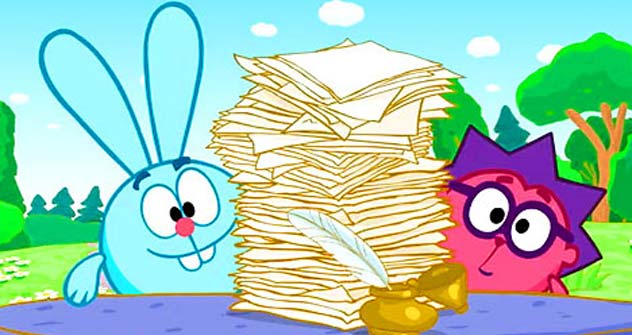 Since its creation in 2004, the Russian cartoon series Smeshariki has focused on high-quality animation and sophisticated storylines. However, as the series expands, its creators are concerned about maintaining the series’ integrity.

On recent visit to the Riki Production Center in St. Petersburg, a list of requirements for Chinese translators of Smeshariki was hanging on the wall—the hugely popular Russian cartoon is being adapted for China, where the series has been in promotion since March. China is only the latest market for Smeshariki, which began selling foreign distribution rights to overseas distributors in 2008; it was the first Russian cartoon bought by foreign TV broadcasters. In August, Smeshariki will begin broadcasting through one of the biggest international children's channels – Nickelodeon – in the CIS, Central Europe and Africa. The expansion into these markets will require the Riki studio to increase its animation production from 35 minutes to 245 minutes per month in 2012.

Smesharikiwas interesting to foreign distributors because the series promotes popular ideas like tolerance and peace. In Smeshariki, the characters overcome the challenges of the world together. The original subtexts of the series, however, are beyond the understanding of foreign audiences.

"It is useless to explain to foreign channels that the series is targeted at an audience of children four to 16 years and adults. They do not believe that producers can employ such complexity and depth in a children's product. Therefore, we are positioning Smeshariki overseas as a product for children six to eight years of age, younger schoolchildren," said Ilya Popov, the general producer of the Riki Group.

Additionally, much of the underlying humor is exclusive to Russia. That’s why the adaptation for China took more than three months. In order to decrease the turnaround time in the future, Riki must decide if it should remove the multi-layered subtexts and leave only the main themes of tolerance and peace, or keep the storylines unchanged.

"Parents say: ‘Children do not understand the subtext of this cartoon,’" said Nadezhda Kuznetsova, the head of Petersburg computer animation studio, which is the part of the Riki group that produces Smeshariki. “The series is full of allegories, background intimations — an adult sees there things a child cannot notice.”

The most "adult" series of Smeshariki— The Meaning of Life — references the 1995 film “Dead Man” by director Jim Jarmusch in its use of long shots, lying in the snow and existential questions like:  "What is the point of washing in the morning? To cheer up? And what's the point in being cheered up in the morning?”

According to the instruction guide for Smeshariki script creators, "the cartoon should be interesting to an adult and understandable to a child.” This approach, typical of all Soviet animation, allows the cartoons to appeal to a very broad audience: from two-year-olds to teenagers and adults. The average annual rating of the cartoon on the STS channel shows that the number of viewers between 16-54 exceeds the number of six-to-15 year-olds by 100,000.

This philosophy works in the Russian market, but as Smeshariki expands, it faces competition not only from local products, but also from Disney, whose stories have universal accessibility.

Even locally, Smesharikiis beginning to feel the heat from the competition. For all animation, some 80 percent of revenue comes from licenses — the right to put the images of the characters on products for children. Over the past three years, this market grew by 25-30 percent year on year. For Smeshariki, which began when there was almost no competition and therefore could put its characters on any interesting product, the period of rapid growth is over, and its sales of product licenses increases only by 15 percent a year.  In order to maintain its position in the market, Smesharikimust increase sales of licensed products 2.5 times by 2015 from the current $200 million to $500 million. To do this, the company needs to incorporate more brands.

"Reaching a wider audience is both our strength and weakness,” said Ilya Popov. "We can hold the attention of all girls and boys aged four to 15 for maybe two or three more years. Then communication channels will develop. Communities of viewers will emerge around these channels. There will be a steady trend of a narrow segmentation."

In response to this segmentation, Riki decided to appeal to different segments of their viewing audience through sub-brands. The Malyshariki project was launched for kids under three: It involves the same characters but in their early childhood, with pacifiers in their mouths. The Malyshariki first appeared in books, but soon the will have their own television series. The PIN Code series, which is under production, targets children up to 12 years of age with themes related to science. This will allow the company to expand the range of stationery and gadgets, like calculators. In late 2011, a full-length Smesharikimovie will be released, aimed at 14 to 25 year-old — the age of most moviegoers.

The introduction of sub-brands, as well as release of a full-length movie are the standard stages of an animation brand development, the fuel for mature brands to periodically heat up the interest of the audience. In addition to expanding sales of licensed goods, the Smeshariki sub-brands aim to attract additional attention to the core brand, which is already experiencing fatigue, as evidenced by the slowdown in sales growth compared to other players.

However, it would be too reckless for the company to stake its future on one brand. Market participants say the Riki Company would like to represent the interests of a foreign brand to level off profits and secure itself against the ups and downs of one brand, but at this point, the company is expanding by acquiring projects from other animation studios and developing its own new brands. So far, Riki has developed the Fixiki series, whose audience range of children between six and eight coincides with the core audience of Smeshariki. This cartoon explains how various appliances, like vacuum cleaners, Popov says that Fixiki complements Smeshariki because while Smeshariki is set in nature, Fixiki is about the man-made world. This brand will also allow the company to expand its range of products into gadgets and mobile content.

The animation industry in Russia has faced challenges because it is difficult to make money off cartoons. Children’s programs cannot be interrupted by commercials, so the only way animation makes its way to the screen is through a law that requires channels to allocate 10 percent of their airtime for children’s shows. But since these timeslots do not generate income, it is easier and cheaper to fill them up with foreign animated series. A Russian animated movie costs around $100-150 per minute, while a Western movie typically costs $7 per minute, including the translation. Live-action series are even cheaper, Movie Research reports.

Russian cartoons have only one way to a wide television audience: the top-ranked children's program Spokoinoi Nochi, Malyshi! (Good night, kids!) which has a captive audience of 5 million viewers. Because this show has a very specific timeslot of six-and-a-half minutes, domestic animation has a competitive advantage over foreign cartoons, which are generally longer.

However, the competition among brands of animation both domestic and foreign is increasing because of the potential of the Russian licensing market. According to the LIMA association, licensed products accounts for 60 percent of sales of children's products in the United States, 40 percent in Europe and only 15 percent in Russia.

Half of the $1.5-2 billion market belongs to Disney — which is consistent with its market-share worldwide. Eleven Disney cartoons are in the top 23 brands represented in retail chains: two of them - Disney Princesses and Winnie the Pooh – are ranked 1 and 3, respectively. Smeshariki takes the second place in this ranking, with 10 percent of the market.

This article has been abridged from the original version, which appeared at http://expert.ru.