A country of cyborg and avatars 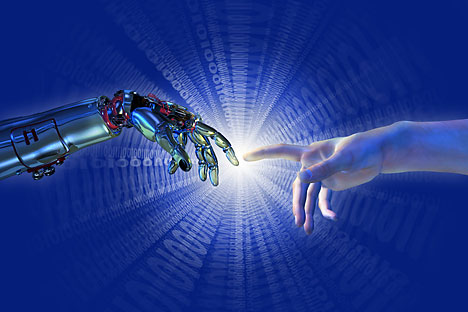 The Russia-2045 project proposes the creation of artificial bodies so that people can live forever.

As a rule, Russians don’t really like to plan ahead. An innocent question like “what do you plan to do this summer?” tends to provoke frank bewilderment. Most likely, the person asked will shrug his shoulders philosophically and say: “We’ll see what happens.” The last 20 years in Russia — and the kaleidoscopic speed of all the changes — have made us accustomed to the idea that you can’t plan your life more than a month ahead, or even a week. The old saying, “Man proposes, God disposes,” is more relevant than ever.

Be that as it may, Russia has recently spawned a most unusual social movement dedicated to creating an artificial body: Russia-2045. By 2045, this movement hopes to have created an artificial body capable of replacing the human one.

Don’t laugh. This is all very serious. Russia-2045 members are not a bunch of science fiction fans and fanatics of the film Avatar, but earnest scientists of world renown. For example, Vyacheslav Ryabinin, the creator of an artificial liver, Professor Vitaly Dunin-Barkovsky of the Russian Academy of Sciences and, finally, Professor Aleksandr Bolonkin, an apologist of immortality by means of artificially created bodies.

The story of Bolonkin’s life is so dramatic that it needs a more detailed explanation. In his time, Bolonkin was one of the Soviet Union’s most outstanding scientists, a creator of engines for spaceships. But in the late 1960s, Bolonkin became an associate of Andrei Sakharov and attached himself to the dissident movement. In that capacity, he constructed a simple duplicating machine used to print hundreds of thousands of pages of the works of Sakharov and Alexander Solzhenitsyn. Naturally, this enterprise couldn’t help but come to the attention of the vigilant KGB. Bolonkin was sentenced to four years of hard labor, but was not freed until 15 years later. For obvious reasons, Bolonkin did not choose to remain in the Soviet Union and emigrated to the United States. There he spent several years working for the military.

More recently, however, Bolonkin’s main focus has been the idea of human immortality. He believes that this problem can be solved with computer systems. Before death, the content of a human brain is copied onto a special chip and that consciousness may continue to exist in a new form — in an artificial body. Bolonkin believes that the creation of such technology is close at hand, the main remaining problem a financial rather than scientific one. In scientific circles today, the most popular and profitable investment is thought to be the creation of artificial organs — small replacement parts for biological bodies. But Professor Bolonkin wants to go much farther — to immortality. And this can be done only given artificial bodies made of plastic and alloys.

The manifesto of the Russia-2045 Movement describes these bodies in glowing terms. First of all, the bodies will be of great use to all emergency services. Such a body would be able to walk into an inferno, or the site of a nuclear catastrophe, like Fukushima; it will be practically indestructible. Working in space and exploring distant planets will be far less expensive using avatars. Meanwhile, gerontology will be revolutionized by these designs for eternity. No more sagging flesh, no more cellulite. Old age will become a thing of the past along with all those worries about physical imperfections.

True, these prospects do raise a few questions. We’ve all been brought up on Hollywood standards of beauty, and so artificial bodies may well be designed accordingly.  For example, I’ve decided to acquire the face and body of Marilyn Monroe. No problem — step right up! But what if millions of other women do the same? That would be a lot worse than running into someone wearing the same dress as you at a dinner party. Imagine, there I am walking down the street as Marilyn Monroe and coming towards me I see dozens of my twins. It’s not a fantasy, but a horror movie come true!

As for immortality, I also have my doubts. Professor Dunin-Barkovsky, describing the glorious prospects ahead, exclaims: “Just imagine, with the help of artificial intelligence, millions of Ivanovs, Joneses, Lis and Singhs will be able to ‘not die.’” I’m not so sure that the earth’s evolution really needs the immortality of “millions of Ivanovs and Joneses.” Ninety percent of all people have trouble figuring out how what to do with themselves on Sunday. Should they watch television or go to the mall? If they were stuck with that choice for decades, it wouldn’t be so much a life as a life sentence.

At the same time I’m sure that there will be more than a few people eager to prolong their existence. One person has already declared himself: Steven Seagal. The American actor recently wrote an open letter to Vladimir Putin asking to meet with him to discuss possible collaboration on the Russia-2045 project. Seagal’s arguments are perfectly convincing: “We’ll be able to restore or even entirely recreate organs and body parts for those who are suffering or dying from illnesses and wounds. For example, a man who has lost his legs in an accident will receive new ones and so be able to return to normal life. This may be the most incredible scientific breakthrough in the whole history of mankind. For me it is a great honor to be part of this movement.” Seagal has Russian roots and considers himself Russian. “I am proud that Russia has recognized the need to develop this technology, that the pioneers are great Russian scientists and researchers; with the help of this technology mankind will be able to make an incredible breakthrough to a new and better quality of life,” the letter continued.

The action star has yet to receive an answer from Putin. Or rather, an official answer. As for what Putin has said unofficially, one can only guess. Perhaps something like this: “Old man, Obama and Sarkozy have already reserved bodies for themselves and their family members, so you’ll be 1,125 in line.”

I personally have nothing against an eternal Steven Seagal. But if he has access to that technology, why shouldn’t someone with a less noble reputation also be able to take advantage? For example, Bin Laden (were he still alive)? On the other hand, if mankind decides to switch to artificial bodies, the problems of war and terrorism will disappear all by themselves. We’ll all live forever!

To confirm these fantastic prospects, we only have to wait another 30 years or so.