Education reform: Real action or just another brick in the wall? 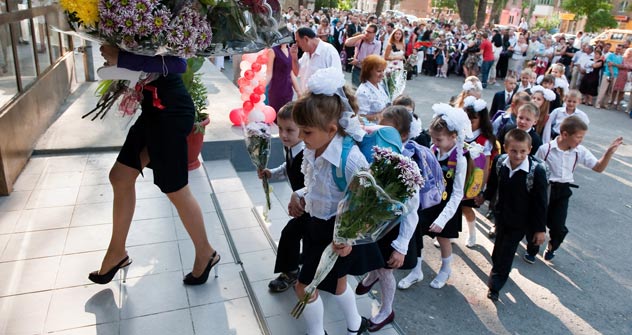 President Dmitry Medvedev focuses on nurturing the individual in educational reform, while critics question the liberal nature of these tactics.

“Over time, apes waded into water more and more often, further and further away from the shore, learning how to swim and dive for food. They developed an erect posture. For some yet unknown reason, some apes resumed their way of life on land, while others became so adapted to life at sea that they remained there forever and turned into dolphins.”

This version of the origin of man from a recently approved civics textbook for fifth-grade pupils prompted some parents to write a letter to President Dmitry Medvedev complaining of the incompetence of the Education Ministry.

The parents’ frustration was echoed by some of the teachers as well: “Some dubious subjects have recently been introduced in the curriculum. This rubbish takes away time from the main disciplines. It’s a small wonder the quality of education is declining,” said Sergei Raisky, a Russian language teacher in Moscow. Raisky, 41, is considered young compared to his colleagues: The average age of a schoolteacher is 48 and one in every five teachers is past the retirement age. Young people do not want to work as teachers because of the low pay, an average of $480 a month.

According to education advocates, Russian schools are steadily deteriorating, partially due to the age of teachers and underfunding of schools at all levels. The big shock came when a recent PISA survey ranked Russia – a country once known for its education prowess – 43rd in the world. PISA is an internationally recognized student assessment for 15-year-olds jointly developed by participating countries and carried out by the Organization for Economic Development (OECD).

After the PISA survey results were announced last February, President Dmitry Medvedev announced a program for school reform. “Pupils will be involved in research projects and creative activities so they can learn how to invent, understand and assimilate to new things, express their own thoughts and make decisions,” the president said.

We don’t need no education

The government is preparing full-scale school reforms aimed at individualized learning. Reforms in primary and secondary schools (grades 1-9) will begin in September. Some teaching will be done outside of the classroom: students will be given 10 hours a week for tours, walks and creative work in cultural places. The government has also promised a 30 percent raise in teachers’ salaries this year. Reforms at high schools (grades 10-11) are still in the design phase, however.

“The school will have more discretionary powers to form its own curriculum in accordance with the students’ wishes,” said Irina Abankina, director of the Institute for Educational Studies at the Higher School of Economics National Research University.

The pupils will choose six additional subjects and decide whether they want to study them at the basic or professional level. There should be at least four majors in which the pupil will pass the Unified State Examination. The applicant will be admitted to university based on these results.

Thus, a student who is not interested in the natural sciences will not be forced to study chemistry, physics and biology separately, and will be able to opt for an integrated “natural sciences” course that includes a more general study of these subjects.

These innovations are designed to bring Russian school education in line with the European model, yet they have caused a public outcry. Parents feel the reforms are an attempt to destroy a classical general education.

Reform advocates have also targeted the system for teaching foreign languages. Languages can only be mastered at special or private schools. At most public schools, students study a language, usually English or German, twice a week. But they learn by focusing on grammar and memorizing texts, forsaking conversational language, according to critics.

“In recent years, our schools have offered only knowledge and not education. The result was a rampage staged by nationalists in the center of Moscow last December,” said Alexander Kondakov, a research adviser to the state on educational standards. He said that Russian school is still authoritarian.

However, he also pointed out that there is a difference between now and 20 years ago. After the collapse of the Soviet Union, Russia began teaching dissident writers and alternative views of the country’s history. But the teaching system remains the same: lectures, and repetition of what the students heard from the teacher. Disagreement with the teacher, or any kind of in-classroom debate, is still perceived as rude.

“The school is less authoritarian than the Soviet school, but a partnership model of teaching whereby teacher and pupil act as equals has not yet arrived,” Abankina said. “The teacher has lost authority and has to deal with rudeness, and he has yet to learn how to organize teamwork in the classroom, where interest in teaching and learning is reciprocal.”