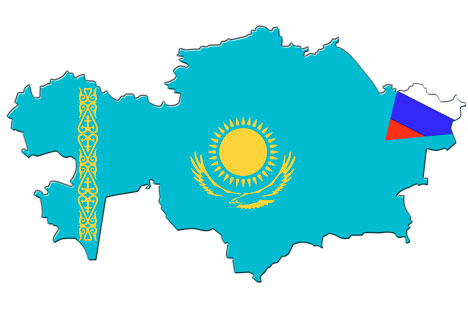 In Central Asia, the Russian minority is dramatically shrinking. In Kazakhstan, Russians assimilate; elsewhere, they wait with the proverbial suitcase under the bed.

On a summer afternoon in Almaty, Panfilov Park is a popular place to be. In the shadow of Zhenkov cathedral, the world’s second-highest wooden structure, crowds of teenagers and young Kazakh families sing karaoke, lick ice cream and try their luck on the fairground machines. The women - it is mainly women - entering the cathedral are for the most part representatives of the country’s aging Russian population.

Kazakhstan’s ethnic makeup has changed dramatically since independence, when Kazakhs were a minority in the new country. Two years before the collapse of the Soviet Union, the 1988 census showed that 39.7 percent of the population of the Kazakh Soviet Socialist Republic were ethnic Kazakhs, and 37.8 percent were Russians. There were also sizeable minorities of Ukrainians, Germans, Uzbeks and other nationalities. Two decades later, 63.1 percent of independent Kazakhstan’s population were Kazakhs and the Russian population had declined to just 23.7 percent.

The mass exodus of the 1990s has slowed to a trickle, but Russians continue to leave Kazakhstan each year. Among the aging ethnic Russian population, the birthrate is much lower than among Kazakhs or Kazakhstan’s Asian minorities.

Kazakhstan was a special case within the former Soviet Union. Before the border between Russia and Kazakhstan was established, there was little distinction between north Kazakhstan and South Siberia. Like Siberia, Kazakhstan served as a place of exile for many nationalities - among them Koreans, Chechens and Volga Germans - removed from their homelands under Stalin’s rule. Today, the country is home to over 100 different ethnic groups.

As in the other Central Asian republics, newly independent Kazakhstan saw a reaction against the country’s former masters. However, this was quickly reversed when the danger of territorial claims by Moscow on the majority-Russian regions of north Kazakhstan became apparent. In addition to moving the country’s capital to the northern city of Astana to put a Kazakh stamp on the north, the government has also tinkered with regional administrative and electoral districts to ensure a Kazakh majority in most regions. At the same time, President Nursultan Nazarbayev took a more pro-Russian course, building a close relationship with Moscow, and giving the Russian language official status.

Political freedoms may be limited in Kazakhstan, but the need to keep the peace has resulted in a nationalities policy that, while it doesn’t please everyone, is widely considered to be sensitive and forward-looking. “On inter-ethnic relations, the Kazakhstan government is quite tolerant and progressive, in comparison both to Central Asia and to Europe. Nation-building in Kazakhstan was based on two things - the multinational aspect, and the idea of “Kazakhness”,” said Zharmukhamed Zardykhan, Assistant Professor at the Kazakhstan Institute of Management, Economics, and Strategic Research (KIMEP).

Nadezhda, a Russian teacher in Almaty, says that Russian and Kazakh people live together peacefully. “But the politics have changed,” she said. “Previously, the Russians were the older brother, who helped the younger brother. Now everything has been reversed. The Russians who have stayed are a national minority. The Kazakhs are the titular nation.”

There are, however, few Russians in top government positions, despite representatives of other minorities, notably Prime Minister Karim Massimov, who is an ethnic Uighur, and central bank governor Grigoriy Marchenko, who is of Ukrainian descent (both are natives of Kazakhstan). Any candidate for the presidency faces a tough Kazakh language exam.

“Although the Russian language is deemed ‘equal’ to Kazakh under the constitution, legislation and programs of ‘Kazakhization’ since 2001 are increasing the use of the Kazakh language as the main language of government,” states a report from Minority Rights Group International (MRGI). “This is proving to be an obstacle to access to education and employment in the civil service for a large part of the Russian minority population.”

However, Russian is widely used in Kazakhstan and some Kazakhs who grew up in the Soviet era still use it as their first language. Russian-language media is also widespread, although Astana plans to increase the Kazakh-language content of television broadcasts to at least 50 percent by 2015. Conversely, while Russian culture has permeated Kazakhstan over the last 300 years, to a certain extent the Russians of Central Asia have absorbed local habits such as the tradition of lavish hospitality and drinking tea from “pilushki” (little bowls). “We are no longer Russians, but we are not yet Kazakhs,” Nadezhda said.

Valery, another ethnic Russian living in Almaty, said she didn’t have to think of reasons to stay in Kazakhstan. “ I just live here and feel like part of this place and community,” she said. Valery took part in the prestigious Bolashak program, which sends some of Kazakhstan’s best students to top international universities, before returning to work at a university in Almaty. “Living and working conditions are the same for any nationality. The only difference is one’s intention to achieve something,” she said.

As Kazakhstan pulled ahead of the rest of Central Asia economically, the case for Russians to stay grew stronger.  The work prospects are more appealing in the Kazakh cities ofAlmaty or Karaganda than in the economically troubled Siberian cities where Russians are encouraged to settle. Gulya, another ethnic Russian living in Almaty said she and her family plan to stay. “My husband and I have work here and our children are at school. We don’t know what the situation will be in Russia,” she said.

The story is different in the other four Central Asian republics, which were less influenced by Russia. In these countries, the Russian tide has well and truly ebbed away, and the language is rarely heard outside major cities. Most Russians fled Tajikistan after the outbreak of the civil war in 1992. The political and social repressions under Uzbekistan’s President Islam Karimov and the bizarre personality cult of Turkmenistan’s former leader Saparmurat Niyazov - the self-styled “Turkmenbashi” or leader of all the Turkmens, did not encourage ethnic Russians to stay.

Northern Kyrgyzstan used to be home to many Russians, both in Bishkek and the surrounding countryside. However, this has been steadily changing since the overthrow of the country’s first president, Askar Akayev, in 2005. Another revolution later, ethnic minorities no longer feel safe in the country.

“The growing trend towards a ‘Kyrgyzstan for the Kyrgyz’ has picked up steam in the last few years,” according to the MRGI report. Ethnic Kyrgyzs now make up almost 70 percent of the population, while Russians are now estimated at less than 9 percent. Even before the June 2010 clashes between Kyrgyz and Uzbeks in south Kyrgyzstan, Russians, Uighurs and Meskhetian Turks around Bishkek were the victims of physical attacks and looting in the north. “Ethnicity has proved a powerful mobilizing factor again in Kyrgyzstan,” said Carl Soderbergh, MRGI’s director of policy and communications.

Back in the early 1990s, ethnic Russians didn’t feel safe on the streets of Kazakhstan’s southern cities of Kyzlyorda and Shymkent at night, while clashes were also common in the northern majority Russian cities. Even today, according to Nadezhda, many Russians still sleep, metaphorically speaking, “with a suitcase under their beds,” knowing that although times are good now, this may not always be the case. They worry that Kazakhstan could get a more nationalistic leader in future. “Now fewer Russians are leaving for other countries, thanks to the peace-loving policies of the president,” she said. “The policy of stability in Kazakhstan does a lot for non-Kazakhs. Nazarbayev is the guarantor of stability in Kazakhstan.”

However, Kazakhstan’s demographics are changing naturally, and it is likely within a generation the Russian minority will hardly be an issue for future governments. The natural decline in the Russian population and the growing prevalence of the Kazakh language means that the Russian question is set to be solved without any radical action by the authorities. Those Russians who remain in Kazakhstan are expected to assimilate into the local culture.