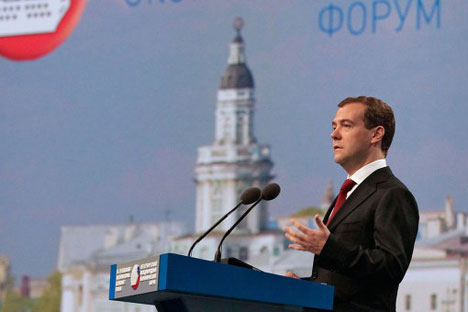 Russia may join the World Trade Organization (WTO) by the end of this year, but not on the wrong terms, President Dmitry Medvedev said during the St. Petersburg International Economic Forum-2011.

.
Russia, the only large economy outside the global trade club, has been negotiating its entry into the WTO for 17 years.

"For a long time, we have been ready to join the WTO more than many other countries - both large and very small. But they are trying to indecently knock many compromises out of us," Medvedev told the St Petersburg Economic Forum.

"Such an approach is unacceptable and Russia will never agree to obviously unfavorable decisions. If our partners are not ready for Russia's fair accession to international organizations, it would be a sad scenario. One way or another, but political or economic interests should not interfere with our successful development."

The Group of Eight most developed nations has said it wants Russia to complete entry negotiations this year, while talks with the EU have been complicated, with sticking points over imports of EU farm goods and new car assembly rules in Russia.

Medvedev said that further integration of Russian into the global economy was inevitable. "We will reduce barriers for foreign investment and expect to complete the process of WTO accession. And then the Organization for Economic Cooperation (OECD). As for the WTO, I think it is realistic to complete the accession this year. Unless, of course, political games start," Medvedev said.