The cucumbers of discord 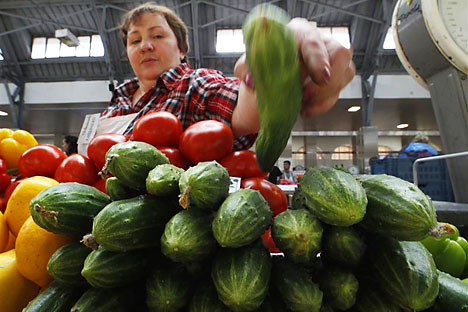 Were health concerns really behind the recent ban on EU vegetables in Russia?

At the EU-Russia summit that took place in Nizhny Novgorod in June, President Dmitry Medvedev “rehabilitated” European vegetables. The Russian president actually gave the green light to vegetable imports from the European Union several days before scientists placed the blame for the latest bout with intestinal infection on soy grown in Lower Saxony. Gennady Onishchenko, Russia’s Chief Sanitary Inspector, didn’t balk at Medvedev’s decision. The running joke among political scientists is that his concern for citizens’ health has never contradicted state policy.

“Onishchenko remembers about harmful products only when there are foreign policy issues to be resolved,” said Nikolai Troitsky, an analyst with state news agency RIA Novosti. In 2006, his Federal Service on Customers’ Rights Protection and Human Well-being Surveillance banned imports of Latvian canned sprats as a scandal over the relocation of a monument to Soviet servicemen killed in World War II flared up in Riga. At about the same time, the agency ordered Georgian mineral water off the shelves – in an apparent response to a sharp deterioration in relations with Tbilisi. That same year the Russian market was left without popular Moldovan wine as a way to put pressure on President Vladimir Voronin, who had refused to recognize the legitimacy of the breakaway region of Trans-Dniestr. Bans on Polish meat imports have coincided with political crises between Moscow and Warsaw; difficulties in relations with the United States have led to regular bans of frozen chicken imports. This year, a ban on imports of Indian potatoes happened to coincide with Russia’s loss of a tender to supply combat jets to New Delhi.

Troitsky is confident that Medvedev’s failure to secure visa-free travel for Russians as well as recurring statements by second-tier European politicians on the need to search for non-Gazprom sources of natural gas supplies led to the ban on European products in 2011. Nina Ostanina, an opposition deputy in the lower chamber of Russia’s parliament, adds the WTO negotiations to this list. As a matter of fact, Medvedev announced progress in the negotiations immediately after he lifted the ban on Europeans products.

Business leaders, on the other hand, say there’s no point in looking for political implications in the vegetable scandal. Whereas bans on imports of Moldovan wines and Polish meat could indeed hurt foreign exporters, the latest embargo was unable to achieve a similar effect to begin with, said Ilya Belonovsky, Executive Director of the Retail Companies’ Association.

Research company Global Reach Consulting reports that Russia imports 12.5 percent of its cucumbers and 24 percent of its tomatoes. Although the numbers may seem rather high, the key suppliers are in the Middle East. Iran and Turkey together account for almost 60 percent of cucumber imports, while the European Union supplies only 5–6 percent. “A ban on cucumber and tomato imports from Spain and Germany cannot possibly lead to a shortage of these products on the market,” said GRC analysts.

Belonovsky argued that Russian companies bore the brunt of the ban. “The consumer rights protection agency didn’t give any advance warning of the ban, so we had to destroy the products that were already in warehouses. Had we been forewarned, we would have simply returned the goods to the suppliers,” he said.

“The bill made its way through the Duma quickly thanks to the cucumber scandal,” said Ostanina. Whether farmers are grateful to Onishchenko remains to be seen.