Will Russia reorient its energy exports from Europe to Asia? 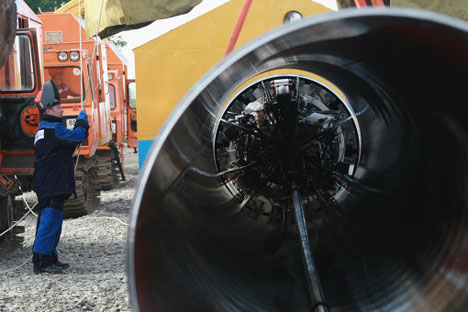 One of the buzz words recently has been “reorientation,” but it is a misnomer. Russia cares for its clients and is most unlikely to go against the interests of its key customers – the European Union and European consumers. Russia exports mind-boggling amounts of energy to the EU – something like 5.5% to 6% of all global primary output.

With 11.5% of global primary energy produced in Russia, about half of it is exported to Europe. Our country generates four times as much energy as Germany consumes in a year. Half of it is consumed at home and the other half goes to Europe. But this is not gas alone: Russia also has large chunks of the European market in oil, coal and fissile nuclear materials. Europe imports one-third of the Russian coal, one-third of the Russian gas and about two-thirds of its crude and refined oil products.

A closer look at the economies of the European Union and some other European nations and Russia will reveal that their interdependence goes far deeper than the media usually highlights. On the other hand, Europe is currently implementing the 20-20-20 program and there are persistent rumors that Europe may not need so much energy from Russia in the future and that it may go shopping for it elsewhere. We do not seriously believe that Europe will be able to do without us. Russian companies should be credited with their drive to build pipelines, because the country’s energy strategists and companies are sure Europe will consume lots of gas in the future. Germany, for one, is facing the need both to abandon coal because of gas discharges and reduce and abolish nuclear power production following the decision made in the wake of Fukushima. The only worthwhile replacement is gas, above all Russian gas, and in all likelihood that gas to be fed along the Nord Stream pipeline.

I think therefore Russia and Russian companies are acting in the best interests of their regular European client even if that client is not clear about what it might require. Russia is taking commercial risks to build gas pipelines to deliver gas to Europe. Europe, however, is sending rather mixed signals: now it wants it and now it does not. Scenarios in Europe often reflect changes in the political situation on the continent rather than depend on hard economic forecasts. Energy consumption in the world made a jump in 2010, and so did gas consumption in Europe.

Russia is making huge investments and running high commercial risks and therefore it wants to be sure that its energy sources will be in demand in Europe. Turning to Asia, Russia expects a considerable growth in gas consumption there, too, and above all in China. But in Asia there are other suppliers apart from Russia. Japan is expanding its market for gas because it is going to slash the production and consumption of nuclear energy, which can be replaced at short notice only by gas.

Nor should it be forgotten that the world, including the EU, is concerned about greenhouse emissions, which increased 5% from 2008 to 2010. One kilowatt-hour of electricity generated by coal (Organization for Economic Cooperation and Development /OECD/ figures) releases 898 g of CO2. In the case of oil, the figure is 651 g and in the case of gas, only 391 g. Replacing coal with gas to produce the same amount of electricity will more than halve CO2 content in the release.

Of course, the world cannot leap to renewable sources of electric power overnight.  With Fukushima looming in the background, there will be a slowing down in nuclear energy development. It will not stop altogether, but follow a somewhat different path, remaining above all in countries like Russia, France, China and India. Perhaps, the rate of expansion in other countries will drop, too, but the most likely candidate for expansion will be gas. What is more, the International Energy Agency issued a report on June 6 titled “Are We Entering a Golden Age of Gas?” taking stock of the global situation today. We think that the message would be more accurate if the question mark were changed to the exclamation mark.

The gas age is coming, and to Asia as well. China is currently producing three billion tons of coal a year, which is almost half of the world’s total – an unbelievable amount. But China is starting to consume more gas, with a considerable contribution from Russia. In the future, if the world is going to cut emissions into the atmosphere, it will need to coordinate efforts with two countries – the United States and China – because they account for 43% to 45% of all emissions. Try as Russia or Europe might to save the global climate, they will fail unless helped by the U.S. and China.

Turning towards the East is not Russia’s willful decision – it cherishes its European market. It is not a forceful move either but an objective reality. The East is experiencing the need for a coal substitute. Besides, there is a partial gap to fill following the loss of some of Japan’s nuclear energy. Asia is developing rapidly and remains a heavy energy consumer. One per cent of GDP growth in China requires one per cent of growth in electric power consumption. Generating plants in Asia are under a tremendous strain to produce more and more electricity.

What Russia is doing is not reorienting itself on Asia, but setting its sights on the second rapidly growing market. Russia has a huge market in Europe, which is important and profitable. Russia is deeply and seriously committed to it. But now as an enormous new market is emerging in Asia, Russia wants to build gas and other pipelines and stations there. This is crucial for its sustained development and energy security.

Leonid Grigoriev is Professor at Higher School of Economics State University, Faculty of World Economy and International Affairs, Department of Energy and Commodity Markets, Deputy Director and Head of Research at the Russian Energy Agency