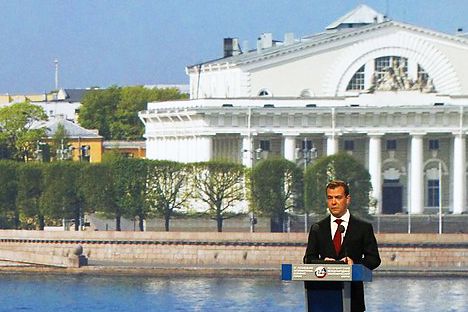 The opening sessions of the St. Petersburg Forum highlighted once again the divergence in perspective between East and West on the global economy.

On display at the official opening of the St. Petersburg International Economic Forum on Jun. 17 was the usual conceptual confusion of recent years in East and West regarding the global economy.

Opening the proceedings, Russia’s Minister of Economic Development and Trade Elvira Nabiullina spoke of global leadership passing to emerging markets because of their high growth rates and the anaemic economies and huge debt of the developed countries in the West.

Many Western investors buy into this logic, too. For instance, Jim O’Neill, the Goldman Sachs economist who coined the BRIC acronym in 2001, has said that the term “emerging markets” was now outdated due to their current and potential growth and the shift in economic power from West to East.

In the last few years, and especially since the global economic and financial crisis, “the Rest” have therefore not only asserted their economic, but also their moral superiority over “the West.”

And yet, despite China’s success of the last 30 years, it remains far from matching Western levels of development, living standards and technology.

However fast they might be developing, emerging markets remain decades, perhaps even centuries behind advanced nations. By definition, they are not developed and remain weak on democracy, the rule of law and corporate governance, and very strong on corruption and environmental degradation.

Measured by per capita income, many remain poor or desperately poor, and they all face huge developmental challenges, from climate change to water shortages to urbanization and demographics to likely future commodity shortages and price increases that could stymie growth.

So while there is certainly a strong investment and business case for the emerging markets, reaching Western standards will not be easy for the BRICS, the Next 11, the CIVETS or any other investment banker’s pet acronym.

Appearing immediately after Nabiullina, Russian President Dmitry Medvedev made some nods to this danger, announcing that corruption remained a massive problem and that the country was no longer building state capitalism; although this approach was needed to restore order following the chaos of the 1990s, it had now outlived its usefulness.

In fact, Russia’s hubris and economic illiteracy during the go-go years between 2000 and 2008 led to major policy mistakes from which the country still suffers. Writing weekly op-eds for the state-owned news agency RIA Novosti in the first half of 2007, I warned that Russia was running a lot of risks by failing to diversify its economy, pursuing aggressive energy and foreign policies, counting on constantly rising energy prices, and building up high levels of corporate debt.

When the first signs of the global economic crisis appeared, Putin made exactly the same mistake as Germany’s finance minister Peter Steinbrück. Full of Schadenfreude, both politicians gloated that the crisis was a distant and purely Anglo-Saxon problem that wouldn’t affect their countries. Both utterly failed to understand that a downturn in the United States would hit European exports, which in turn would hit Russia’s energy and metal sectors, not to mention the financial sector worldwide.

As a result, Russia was very slow to react to the crisis and lost valuable time. Putin and Russia now claim credit for avoiding the street unrest in countries such as Greece and Spain, but their solution, like that of China, was purely Western, namely deficit spending – a policy developed by one Briton, John Keynes, and promulgated by another, Gordon Brown, as the best solution during the crisis. As so often in history, the West causes big problems, but almost invariably finds the solutions too. So much for emerging market economic leadership!

Long before the crisis, Russia totally ignored numerous warnings about its high-risk economy, continued with its state capitalism and failed to reign in the ballooning bureaucracy and corruption. Moscow thus missed its best chance in decades to diversify the economy during the good years up to 2008 and now faces the much bigger challenge of growth and development in a far harsher environment full of risks in both developed and emerging markets.

Medvedev is now getting some praise from investors for his reform efforts, but in fact many of his initiatives, such as greater privatization or removing government ministers from the boards of state companies, just reverse earlier policies which should never have been made in the first place.

So far the St. Petersburg Forum has shown once again the Russian government’s poor thinking on economic policies and the distorted structure of the economy.

As usual, the focus was on big projects and deals with international companies, especially in the energy sector, which often enjoy access to government. But small and medium-sized enterprises (SMEs), the backbone of advanced economies, cannot get going in Russia because of massive bureaucracy and corruption.

Addressing the Forum, Medvedev mentioned the need for SMEs and private initiative, but the problem is that Russia experts have heard these kinds of ambitious plans before, for example during the perestroika of the 1980s.

The outside world generally thinks that the Russian state is very strong, but in fact it often cannot get things done at all. Bureaucratic resistance, apathy and sheer incompetence undermine many government policies and hinder growth, a problem that goes back centuries and scuppered Gorbachev’s reform efforts. State television frequently shows Medvedev and Putin engaged in micro-management, cajoling or threatening officials and businessmen to get things done or, even, worse, complaining that officials have not done their work properly. Even direct presidential and prime-ministerial orders are not always carried out at the cabinet and gubernatorial levels.

Medvedev’s policy of high-tech modernization is also problematic. Again history sheds light on the problem. For all its military capability and educational levels, the Soviet Union was largely incapable of mass production, one reason among many being that it concentrated on churning out great specialists, but not on great generalists capable of handling complex problems involving different areas of knowledge. Now, Russia is striving for high-tech, and the country is the world’s second-largest producer of business school graduates. But many Russian employers do not want or need whiz kids from top business schools because in this strange economy they are simply superfluous to requirements.

Unfortunately, the government remains stubbornly blind to low-tech possibilities. It was announced at the Forum on June 16 that Russia and the U.S. would introduce major changes in the visa regime between the two countries, partially to make life easier for businessmen. This looks like a positive step forward, and indeed it is, but once again it shows narrow thinking on the part of Russia’s leadership.

Russia has a fantastic combination of stunning natural beauty and a brilliant cultural heritage, and yet it keeps pressing the European Union and others for reciprocity on visas, rather than developing tourism and attracting business by giving visas at all points of entry in a few minutes.

But Moscow wrongly thinks that doing so would be a sign of weakness incompatible with its hubristic vision of itself a great power on a par with the U.S. and other advanced countries.

There is a big paradox in all this. The West is obviously hamstrung by its current economic problems, but these are nothing compared to those in developing countries.

The advanced countries can also still call on the best science, research, technology, design and products in the world. And their companies would jump at the chance of decent investment opportunities in emerging markets for the huge piles of cash on their balance sheets.

Moscow would do well to declare Russia totally “open for business” and get on with it rather than continuing to put the brakes on its own economic development.