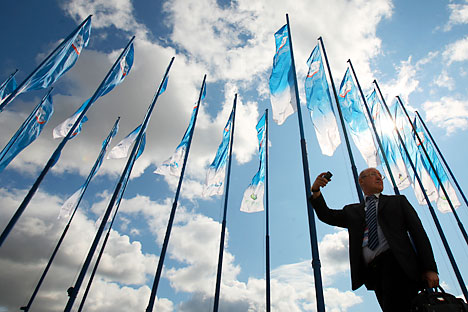 A bullish Dmitry Medvedev left investors so enthusiastic at last weekend's St. Petersburg forum that even his biggest shortcoming could not spoil the mood: He refused to say whether he would address the forum as president again next year.

After the St. Petersburg International Economic Forum proceeded from highlight to highlight for three days, Medvedev was forced to admit at the very end of Saturday's closing session that he still could not promise to stand for re-election.

"Can I ask one puckish question? … Are you going to run for president next year?" asked an awkwardly chortling Wall Street Journal editor, Robert Thomson, adding that this might be "the perfect moment" for Medvedev to make public his thoughts.

The president, however, jovially crushed all hopes that he would solve the country's most pressing political puzzle.

"When I believe the moment is right to say directly whether I will or will not run, I will do so," he said. "But this forum is not the best venue for that."

With a wink, he added that it would not be long until he announced his decision, but "every story should have its own intrigue, otherwise life would be boring, so let's enjoy it a little longer."

The question of who will run the country after the State Duma elections in December and the presidential vote next March has become ever more vexing since Medvedev and his prime minister and predecessor, Vladimir Putin, have both said they might stand, while seemingly drifting further apart in their policies.

Medvedev fueled talk of a rift in the tandem that has governed the country since 2008 when he lit a blaze of liberal policies in his keynote speech Friday.

As a central theme, he touted an end to government intervention in the economy, which he described both as state capitalism and "manual control" — a definition closely associated with Putin's habit of personally intervening in industry decision making.

The president's repudiation of what is seen as Putin's style was perhaps the most striking moment in his 35-minute address. "This is not my choice — my choice is something else," he said slowly, adding that private entrepreneurs and investors should play the dominant role, while the state should protect them.

The president also told his audience, which included scores of governors, that his sacking of long-serving regional bosses often resulted in improved local business climates. He picked Moscow as an example, saying that under Mayor Sergei Sobyanin the amount of documents necessary to start construction projects has decreased.

"A pretty presidential speech," said Andrew Somers, president of the American Chamber of Commerce in Russia.

Medvedev was trying to win the support of "his colleagues in power and the Russian elite" ahead of the election, said Darrell Stanaford, managing director of real estate agency CB Richard Ellis in Russia.

Stanaford said both foreign and Russian business agree that the government should not dictate from above but rather provide conditions for them to thrive. "This is the format which is necessary," he said.

Others noted Medvedev's frequent use of the word "choice," which in Russian is the same as the word for election.

By reiterating "my choice," Medvedev has indicated that he personally backs his promises, said Klaus Kleinfeld, CEO of U.S. aluminum giant Alcoa.

"It is the same language that a U.S. president would use," Kleinfeld, who chairs the U.S.-Russia Business Council, said in an interview on the sidelines of the forum.

"It was an excellent speech, and I haven't heard a single criticism," he said.

Arkady Dvorkovich, Medvedev's top economic policy aide, told reporters that the president had undoubtedly given "a political speech." But he was careful to stress that it was wrong to call it a campaign speech. "The election campaign hasn't started yet," he said.

Analysts noted that investors and big business were hardly the audience for a campaign speech.

But in another twist, Medvedev made it clear that his modernization policy would be followed even if he weren't in the Kremlin. "The project will go ahead no matter who holds office in this country over the coming years. I guarantee this personally as the president of this country," he declared.

Dvorkovich expanded on this, saying Medvedev's policies "must be brought into life regardless of who will be Russia's president and prime minister and who will occupy other government positions."

Frank Schauff, CEO of the Association of European Business, said that while Medvedev "sent a message of political stability," the government had yet to implement many reforms. "I hope it will come into being," he said.

Other participants put it more bluntly.

"It was a very nice speech, very professional. But it was very similar to what we heard a number of years ago, and nothing is really changing," said a senior banking executive, who asked not to be identified in order to speak candidly.

Published by the liberal Gazeta.ru news site in September 2009, "Go Russia!" is a 4,000-word liberal manifesto that paints the country as a "primitive raw materials-based economy," blighted by "chronic corruption" and "shamefully low" productivity.

But Parfyonov also acknowledged that Medvedev remained the biggest hope for many. He said praise for the president was especially overwhelming during the lunch, which was attended by more than 100 bankers. "It almost was like at a Soviet party congress," he said by telephone Sunday.

Addressing one of the hottest topics for forum participants, Medvedev said plans for a privatization drive that he initiated were "too modest" and the government must adjust them by Aug. 1.

Participants were also buoyant about the prospect of the country's accession to the World Trade Organization by the end of the year.

Medvedev provided one of his strongest arguments for accession so far by saying the economy could not function without free trade. "Markets are like parachutes — they work only when open. Without an open economy, we will fall very badly," he said in his speech.

He said admission was realistic by year-end, but warned of "political games" that could hamper the process. He also stressed that Moscow would only join under acceptable terms.

Five U.S. business leaders on Friday handed Medvedev a letter in which 35 CEOs from both the United States and Russia offered their help to facilitate the admission process, which has been ongoing for 18 years. A copy of the letter was also sent to U.S. President Barack Obama, the Kremlin said on its website.

Kleinfeld, who was among the five CEOs who gave Medvedev the letter at a meeting, said Russia's WTO accession is a top priority for U.S. business. "We want to make sure that that is well understood not only in Russia but also around the world," he said.

He said the meeting with Medvedev was very encouraging. "It's a clear sign that the modernization is going forward," he said.

After significant progress, WTO talks have recently stalled amid disputes over agriculture, car industry subsidies and a spat with Georgia about its breakaway territories.

Economic Development Minister Elvira Nabiullina warned at the forum that talks might be delayed by several years if no agreement were reached on key issues late July.

Somers, of the American Chamber of Commerce, said he expected the talks to end in the fall. "If both presidents want it, accession will happen," he said of Obama and Medvedev.

Meanwhile, an alternative forum held by opposition activists passed without incident after its organizer was briefly detained en route to St. Petersburg.

Police stopped the car of Eduard Limonov, a leader of the Other Russia movement, late Friday near the border between the Tver and Leningrad regions, Limonov told Ekho Moskvy radio.

He was released after several hours without explanation for the delay, he said.

At the forum, Limonov denounced the official forum as a "vanity fair and feast in a time of plague," according to his movement's website.