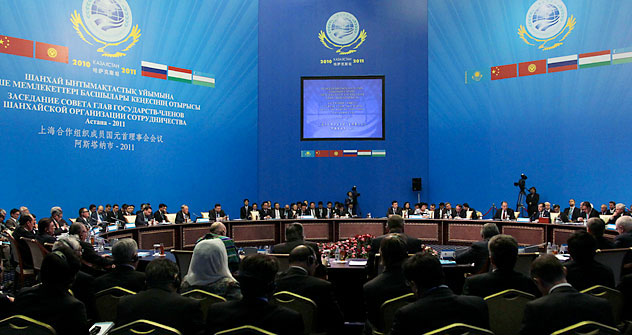 The tenth summit of the Shanghai Cooperation Organisation (SCO) concluded successfully in Kazakh capital Astana on June 15, 2011. The SCO, which is focused on fighting the trinitarian evils of extremism, terrorism and separatism on the one hand and on creating a web of regional prosperity on the other, is on the verge of transformation and expansion. Mongolia, Iran, Pakistan (all observer states) have expressed their strong desire to become full members of the organisation. Of late, India has also shown its keenness for getting full membership. New Delhi thinks that joining the SCO will provide it an important platform for sharing security concerns of the region and to work closely on issues relating to the stability of Afghanistan. Though SCO is not interested in sending troops to Afghanistan as they had bitter experience on this front during the Soviet times, which they would not like to repeat, but as most of the SCO member/observer states share the common border with Afghanistan it becomes essential for the SCO to maintain peace and stability in Afghanistan. Hence, in this regard the SCO appreciates India's cooperation. Afghanistan has already submitted its application for getting membership in the SCO and this was discussed at length during Astana summit. It is expected that Afghanistan will soon get the status of an observer from the dialogue partner so that they can play a more active role in the organisation.

India is now taking a closer look at the SCO, but still one could see some hesitation during the recent summit. While the 10th SCO summit was attended by heads of states, India was represented by its foreign minister only. In the past too India preferred not to be represented by the head of state in the summits to maintain some distance. Hence, in most of the SCO summits, India was represented by Minister of Petroleum and Natural Gas. However, in the Yekaterinburg summit in June 2009, India signaled a major shift in its attitude when Prime Minister Manmohan Sigh attended the summit himself. This clearly indicated India’s seriousness about the organisation.

In the summit last year in Tashkent, the SCO decided to bring in some more countries as full members as well as observers.
It is hoped that India will soon become a full member of SCO. In fact, India and Pakistan are considered as the favorites for joining the six-nation regional grouping. The UN sanctions effectively block Iran from joining the SCO. According to SCO norms and rules a country which wants to become a full member of the SCO cannot be subject to UN Security Council sanctions. India’s full membership in the SCO would help to strengthen the fight against terrorism and drug trafficking. It’ll also provide India a closer platform for integration with the Eurasian States (including Central Asia and Russia) and can address the geopolitical as well as security concerns of the region. India, along with other SCO states, can contribute in increasing regional stability.

The growing importance of the SCO makes it essential for India to increase dialogue and engagement with this body and strengthen its position within the forum. A strong India-SCO relationship would bring major trade and investment opportunities for India. The SCO is gradually realising its ambitious economic integration agenda, including the formation of a free-trade zone and setting-up rules for the free movement of goods, services and technologies within SCO member states. With its rapidly growing economy, India’s energy demands are set to grow manifold, and in this context the energy-rich SCO states could be of strategic importance. India has played an important role in strengthening the SCO since it joined it as an observer at the fifth summit held in July 2005 in Astana. India shares with the SCO common positions on many politico-security issues and concerns of the region. India has good relations with all SCO members; hence, prospects for future cooperation are very bright. India in interested in getting the SCO's full membership for politico-economic as well as security reasons. It is also expected that during China’s SCO presidentship in 2012, India-Pakistan and India-China relationship will improve considerably as leaders of the SCO member states announced 2011-2012 as the SCO's year of good-neighborliness and friendship.