Jimmy Wales: “President Medvedev is the only world leader who actually understands the Internet” 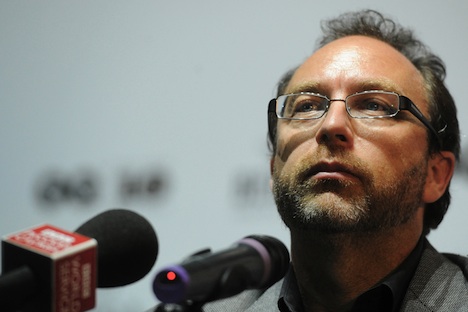 At a meeting in Moscow, the founder of Wikipedia said he was encouraged about the future of the Internet in Russia.

With more than 720,000 articles, the Russian-language section on Wikipedia is one of the site's largest. According to site founder Jimmy Wales, it is also one of the fastest-growing. Wales came to Russia in the middle of June to talk with the local wiki-community about freedom of speech, copyright protections and the future of the media.

The month before his visit to Russia, Wales participated in the eG8, a precursor to the G8 meetings in Deauville, France. In deference to the increasing role the web is playing in politics and economics today, French President Nicolas Sarkozy invited the heads of the world’s leading Internet companies to gather in Paris to discuss the future of the Internet and its place in society. In addition to Wales, Facebook CEO and founder Mark Zuckerberg, the chairman of the board of Google Eric Schmidt and representatives from Microsoft, the BBC and eBay also participated in the meeting.

“Unfortunately Sarkozy thinks that the Internet must be controlled and regulated,” Wales said, describing the eG8 discussions during his press conference in Moscow. “At the G8 meeting, President Medvedev was the only person to say anything sensible whatsoever.”

Medvedev’s enthusiasm for all things online is one reason Wales is so excited about the future of the Internet in Russia. At his press conference, Wales suggested that all the journalists who planned to write about the event title their stories “Medvedev is the only world leader who actually understands the Internet.”

“He (Medvedev) put forward some proposals on the reform of the copyright law,” said Wales. “He understands that the problem is not only the issue of content producers versus pirates, although this question is of course important. He is also proposing that the law should explicitly recognize that there are people who want to share their work freely. So I’m excited about the future of innovation and the internet in Russia because of this.”

All the content in Wikipedia is licensed through Creative Commons, which creates licenses specifically for people who want to share their work for free. In many places around the globe, their main task is to make sure that the licenses are consistent with local law. Unfortunately, Russian copyright law is not structured in a way that allows it to work with the Creative Commons model. Wales, however, is optimistic that the problems can be overcome. “Of course it’s too early to know for sure, but I’m happy that President Medvedev asked for an update to the copyright law to fix this problem,” he said.

The June trip was not Wales’s first visit to Russia. After a trip in 2009, he stated in an interview that he found Russian society very closed and lacking in information. Has the situation changed?
“I can only say what I hear from my community of editors in Russia,” said Wales. “I think the situation has already much improved, but even today there may be some inappropriate pressures on journalists. Obviously Russia today is not the Russia of 50 years ago. And it’s a good thing.”

In response to questions from the audience about factual errors in Wikipedia articles, Wales explained that the best thing to do is to get in contact with the wiki-community. His Wikimedia foundation is also increasingly doing outreach to organizations that are interested in improving Wikipedia, although this work is neverending.

“I suppose we will never achieve perfection, because we are just human beings,” said Wales a bit sadly, summing up the situation.

The popularity of Wikipedia depends on many factors that are out of its founder’s control such as Internet access (and the speed thereof) and even literacy. For Wales, the most important task in Wikipedia’s future is to have the site operate in all the world’s languages, particularly the languages of the developing world. As the next billion people start coming online, they will want to work in their own languages – “All of them,” said Wales