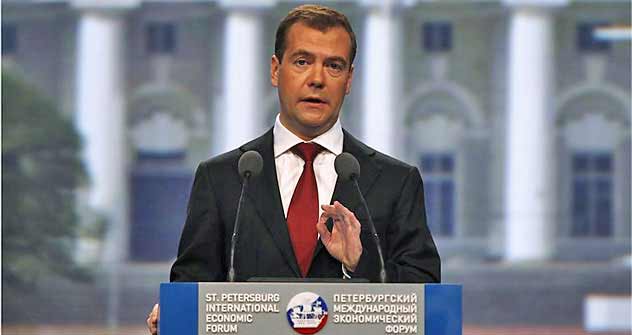 President Dmitry Medvedev has set a goal to reform, modernize and decentralize Russia as quickly as possible.

If Russian politics were a multiple-choice game, President Dmitry Medvedev would have played his hand differently. That was the Russian president's key message to hundreds of Russian and international business leaders and entrepreneurs who gathered for this year’s St. Petersburg economic forum on June 17. In a keynote speech, president Medvedev prodded the country's political elite to desist from state control of the economy, a practice that he said has subjected the nation’s economy to "manual control" and relegated market forces to a back seat.

The idea that the state is always right is symptomatic either of rampant corruption or of widespread favoritism at state-owned companies, Medvedev said.

The president asserted that the dominance of state-owned industrial enterprises in the domestic marketplace has resulted in low entrepreneurial and investment activity, and is undermining the competitiveness of the Russian economy. "Such an economic model is dangerous to the country's future," Medvedev said. "This is not my choice. My choice is for a major revamp not only of outdated elements of the economy, but also of all public institutions," Medvedev said. Without calling any names, the president rejected the often-cited argument that state control over large swaths of the economy under his predecessor, present Prime Minister Vladimir Putin, has guaranteed a decade of economic and political stability. "Behind this notorious stability could lay the next stagnation, therefore it is necessary to quickly and decisively change all that hinders breakthroughs in [economic] development," Medvedev told leading politicians, economists and businessmen.

President Medvedev also used his keynote address to map out a national development strategy “for the next several years,” saying that the plan should be implemented "regardless of who occupies which job in our country next year." Giving a broad assessment of his modernization program, the president conceded that the going had not been easy. "But we never thought it would be easy," Medvedev said. As evidence of some success, he pointed to the dramatic increase in the number of Internet users in Russia (there are now 65 million) and to the successful IPO by home-grown high-tech giants like Yandex and Mail.Ru. "We are not building state capitalism," he said. "Yes, we had a stage of development, associated with an increased state role in the economy, brought on by the need to stabilize the situation after the chaos of the 1990s and simply to put things in order." However, the potential of strengthening the state’s role in the economy had been “exhausted,” Medvedev said.

In a renewed effort to loosen the state's grip on the economy, Medvedev ordered the government to put forward proposals by August 1 for the sale of controlling holdings in several major state-owned companies. The new privatization drive could mean selling bigger stakes in state companies Rosneft, Russia’s leading oil producer, and VTB Group, the country’s second-biggest lender, Arkady Dvorkovich, the president’s top economic adviser, told reporters on Friday. As he has several times in the past, the Russian president promised to open a new chapter in the fight against corruption. "The noose around the neck of corrupt officials must be constantly tightened until they suffocate. This has the support of all in Russia, without exception," Medvedev said. He suggested that evidence gathered during a criminal investigation should be sufficient grounds to dismiss corrupt officials. "In essence, this is the same as dismissal over loss of confidence," Medvedev said, leaving some experts nonplussed. "We must understand that for a leader who has championed the rule of law, supporting extra-judicial measures against corrupt officials is a tall order," said Kirill Kabanov, the head of the nongovernmental National Anti-Corruption Committee. "Some difficult problems may require unorthodox solutions in Russia."

President Medvedev said he would also like greater decision-making power to be transferred from the federal authorities to the regional and municipal governments, a move experts say would unravel the "power vertical" inherited from his predecessor. “If everything only begins to work on a signal from the Kremlin, then it means the system is not sustainable and should be seriously changed,” Medvedev said. Earlier, Medvedev warned during an official visit to the city of Kostroma that "excessive concentration of power is definitely a dangerous thing that has happened repeatedly in our country." Medvedev announced plans on Friday to set up a working group to prepare proposals for the decentralization of power in the country. "In the near future I will set up a high-level special working group to prepare proposals for the decentralization of power," RIA Novosti quoted Medvedev as saying. "Proposals will include correcting the national tax system and the principles of relations between government agencies."

As expected, Medvedev tried to widen Russia's investment appeal by calling for the abolition of visas for foreign investors with sizeable business interests in Russia, "including, of course, those involved in the Skolkovo innovation center and international financial center in Moscow." Medvedev said he wants work accelerated on the latter, and promised to introduce a new raft of laws to expedite action on the project. In order to improve the development of the Moscow metropolis, Medvedev suggested expanding its borders and creating a new Federal District that will share the administrative functions of federal and state agencies. Moscow Mayor Sergei Sobyanin supported the move on Friday, saying that the establishment of satellite cities that suck-in government agencies will ease the pressure on the nation's capital and resolve the gridlock problems that the city is notorious for.

But while the president ticked off the highs and lows of his presidency on June 17, uncertainty over who will rule Russia come 2012 continues to linger in the minds of investors. The Russian president did not tell investors whether or not he could be counted on to steer Russia through economic and political reforms he so accurately itemized. Meanwhile, some investors – Russian and foreign – have continued expressing exasperation by pulling their money out of the country. Russia has registered $35 billion in capital outflow so far this year, Alexei Ulyukayev, the first deputy president of the Central Bank, said in May. "The president’s speech cannot be viewed as a ‘weathercock’ for Russia's presidential election in 2012," Vyacheslav Nikonov, head of the pro-Kremlin Politika foundation, said. "There's a more appropriate forum for that than an auditorium packed with foreign businessmen."