The Night Witches who ruled the skies 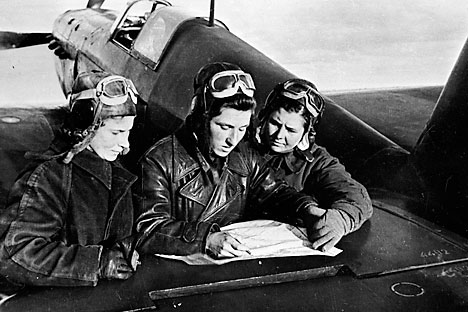 Historians are still uncovering stories from World War II, including that of the Soviet Union's young female fighter pilots.

On that day, most of the Soviet warplanes were crowded together on a small number of airfields; according to historians, many of those planes were destroyed by the Germans and most of the fighter pilots waiting in the wings were not very experienced.

The Soviet Union was in desperate need of talented pilots. In the coming months, Radio Moscow broadcast an announcement that was probably the first of its kind: a call for women who wanted to be “ combat pilots just like the men.”

The response was overwhelming. Bruce Myles writes in his book, “Night Witches: The Amazing Story of Russia’s Women Pilots in World War II”: “As the winter of 1941 continued into the dark days of 1942 and the Soviet counter-offensive around Moscow started, young women from the unoccupied territories of the Soviet Union—from as far away as Central Asia—arrived in the capital.”

They were schoolgirls and factory workers who had won wings in their local flying clubs, and now they wanted to fly bomber planes in the Great Patriotic War against the Germans. It is a chapter of World War II history completely unknown to most Americans. Women poured onto Pushkin Square after train trips from the far corners of the Soviet Union in the hope of seeing air combat against the Nazis. Within a year, entire regiments of Soviet women pilots fought against the Germans, and many of them became known as the “Night Witches,” for their precision, valor, and, honestly, sex appeal.

It was the Germans who first called them Night Witches, or "Nachtexen." They flew their missions in small training planes at night, largely undetected. Usually they embarked on a technique called harassment bombing, flying over places where troops were relaxing after a long day, bringing insecurity, if not terror to the base camp.

In Washington, D.C., in 2011, the conventional wisdom is that the first women to see combat have been American women in Afghanistan and Iraq, despite a formal ban against combat. Few realize the heroic sorties fought by these Soviet female pilots.

“The account of the ‘Night Witches’ is another of the interesting and not-well-known stories from the Second World War,” said Robert Patrick, the director of the Veterans’ History Project at the U.S. Library of Congress, by email. “The history of World War II continues to provide us with fascinating stories, personal experiences and unique situations from what is the most intriguing event of the 20th Century. Situations like the "Night Witches" lead us to look for the next little-known stories, which are often only learned from those who lived them.”

Lilia Litvyak, a fighter pilot who managed to shoot down lots of German aircrafts. Source: ITAR-TASS

One of these little-known stories is that of Lilia (or Lydia) Litvyak. She became known as the one of the fiercest Soviet women pilots, although she faced enormous challenges during her heroic tour of duty.

According to Myles, Litvyak joined a flying club at the age of 15, and devoured every book on aviation. She was such a fast learner that she flew solo on the PO-2 biplane after four hours of instruction. Her colleagues recalled that she faced a great deal of chauvinism. Like most of the women fighter pilots, Litvyak needed a cushion on the plane seat to see out the windshield. Yet her sorties against the German have become the stuff of legend and she was ultimately a poster warrior – the Soviet inundated the Germans with leaflets of her exploits from the skies.

Her plane was shot down in 1943 in Ukraine, over Krasny Luch. She was 21 when she died.

M. G. Crisci, an American businessman and writer, has recently made Litvyak his life’s work. He collaborated with Yelena Sivolap and Valentina Vaschenko, founder of the Lilia Litvyak museum, on a book called “Call Sign, White Lily.” The self-published book offers a romantic journey through Litvyak’s life, romance, rebellion, heroism and death. He has created the Lilia Litvyak Fund to help maintain the corner-store museum Vaschenko has nurtured.