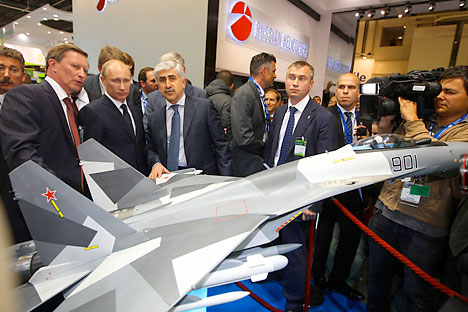 Prime Minister Vladimir Putin presided over the signing of several aviation deals in Paris and used a meeting with French investors to apologize to the contractor building the Moscow-St. Petersburg highway through the Khimki forest.

Prime Minister Vladimir Putin presided over the signing of several aviation deals in Paris on Tuesday and used a meeting with French investors to apologize to the contractor building the Moscow-St. Petersburg highway through the Khimki forest.

Putin went out of his way to demonstrate the government’s goodwill toward investors, apologizing to road builder Vinci over the delay in construction of the highway and promising not to walk away from prior commitments even if they appeared to hurt Russian business interests.

“These delays were caused by the need for a more thorough environmental impact analysis. … I thank you for understanding this situation, but the issue is now resolved,” Putin said.

Work on the $8 billion highway was suspended last summer after environmental activists protested the construction through the centuries-old Khimki forest. The government gave the green-light for work to resume in December.

Vinci vice president Yves-Thibault de Silguy told Putin that his company was determined to continue investing in the development of Russian infrastructure, adding that quite significant money has already been invested in the construction of the highway, Interfax reported.

Later at the Paris Air Show, Putin attended the signing of several deals involving Russian aviation firms, with the Sukhoi SuperJet gaining 12 more orders by the end of the day.

Other deals included an agreement for a joint venture between Russian Helicopters and British-Italian firm AgustaWestland to produce helicopters in the Moscow region, and a memorandum of intent for a joint venture between space corporation Energia and Astrium, a subsidiary of European aviation and space conglomerate EADS, to develop communication and Earth-monitoring systems.

Putin began Tuesday by unveiling a monument to Russian troops who fought in France during World War I.

He said the statue was an image of the “mutual attraction” and “unbreakable bond” between the two countries.

But now the relationship is commercial, not military, and Putin used the rest of his trip to promote Russia’s aviation and space industries, push for nuclear cooperation and persuade French companies that it still makes sense to invest in Russia’s infrastructure projects.

He told members of the business association Russian-French Dialogue that trade with France “has not only reached pre-crisis levels but last year even exceeded it.”

In reference to a plan for Russian-made rockets to launch French satellites — possibly for Europe’s Galileo navigation system, a rival to Russia’s Glonass — the prime minister said: “Agreement is dearer than money. What has been agreed will be done.” The rockets are to take off from the European Space Agency’s new space center in French Guiana by fall.

The one theme Putin returned to repeatedly was aviation. He was also in town to boost orders for domestic firms at the Paris Air Show, where 59 Russian companies are participating — one of the largest delegations. The firms occupy 1,700 meters of exhibition space and include 10 companies belonging to the Federal Space Agency and dozens of firms showing off military hardware.

Clearly the biggest push is for sales of the Sukhoi Civil Aircraft, the division of the United Aircraft Company, or UAC, that makes the SuperJet 100. The new regional jet performed for an audience including Putin in the afternoon.

The SuperJet has French content — the engines were developed by PowerJet, a joint venture of France’s Snecma and Russia’s NPO Saturn.

The jet is a regional airliner designed to address booming demand in that segment. It is the first modern commercial airliner Russia has produced and is meant to jump-start the civilian aviation sector.

Despite heavy backing from the government, it has been a rocky ride marred by constant delays. In December 2010, Alitalia canceled an order and switched to Brazil’s Embraer because of broken delivery promises from Sukhoi.

In April, Transportation Minister Igor Levitin said Aeroflot, which expected the first SuperJets deliveries in 2008, would ask the government to fine Sukhoi for the delays.

Aeroflot finally took delivery of its first SuperJet earlier this month, and the craft made its maiden flight with the state carrier on the Moscow-St. Petersburg route for last week’s economic forum.

There were 170 SuperJets ordered prior to the start of the Paris show, and Tuesday’s order by Indonesian carrier SkyAviation adds 12 more so far.

Nonetheless, UAC is determined to be the third market player behind Boeing and Airbus by 2025.

“We are here to convince our customers, our potential customers, that we are capable of all these targets that we put in front of us,” chairman Mikhail Pogosyan told Reuters in Paris.

While the SuperJet is targeted at a market dominated by Canada’s Bombardier and Brazil’s Embraer, UAC is also readying an airliner to challenge the giants of the aviation industry — Boeing and Airbus.

The MC-21, a medium-range liner by Irkut and the Yakovlev Design Bureau, is envisioned as a replacement for the aging Tu-154 and Tu 204/214 models and a competitor to Airbus and Boeing’s next generation of aircraft.

The designers, who promise it will save 15 percent on operating costs compared with currently flying equivalents, hope to win certification by 2016.

Russia also has high hopes for the Beriev Be-200, an amphibious plane used for fighting wild fires, which dumped a load of water on the landing strip for the benefit of the audience Tuesday afternoon. France may be interested in buying Be-200s to replace its aging fire-fighting fleet, which is due to retire in 2015-17, press materials prepared ahead of Putin’s visit said, Interfax reported.