Missile defense: Not Joint, but cooperative 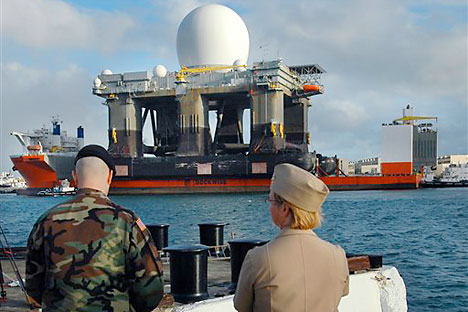 Military personel watch as the Sea-Based X-Band Radar sails into Pearl Harbor, Hawaii, aboard the MV Blue Marlin. The 280-foot tall Sea-Based X-band Radar is so powerful it can identify baseball-sized objects from thousands of miles away. US army was

Russia, the United States and NATO need to see that the payoff for dialogue over missile defense is not just limited to the issues at hand.

At the news conference following the G8 Summit in Deauville, France, Russian President Dmitri Medvedev said that he was not entirely satisfied with the response by U.S. and NATO to the Russian proposal on anti-ballistic missile defense in Europe. Before the summit, similar messages were sent from the Russian ministries of foreign affairs and defense. Deputy Minister of Defense Anatoly Antonov was the most forthright: He said that Russia was preparing a response in case its proposal was rejected; and it seems that the time for this response has come.

But was the Russian proposal really feasible?

In a speech in November 2010, Medvedev indicated that Russia wanted full involvement in the plan for European missile defense, including data exchange and responsibility for particular zones. Russia was ready to intercept missiles launched from the east and southeast in the direction of Europe, and it expected that NATO members would hit missiles launched from the west in the direction of Russia. According to this “sectoral approach,” Russia and NATO were supposed to counter potential threats by standing back to back.

Regardless of the proposal’s feasibility, however, by not responding to it, Washington and Brussels have indicated that they are not interested in working with Russia. In Medevedev’s words, they are wasting time. Even if the proposal was not good enough, it could have been a starting point for negotiations. But now this lack of response is Russia’s main cause for concern. It indicates a lack of transparency in missile defense that makes Moscow nervous.

In Deauville, Medvedev said: "If we do not reach agreement by 2020, a new arms race will begin." But this is not an appropriate way to deal with the missile defense problem. Threats and intimidation cannot serve as a staring point for dialogue. We need another foundation.

First of all, the lack of reaction by the U.S. and NATO to Russia’s sectoral missile defense strategy is not in itself a failure. By now, Moscow, Washington and Brussels have enough experience working together in this area that it should be possible to directly address each other with concerns. This is a true foundation for dialogue – a dialogue that can only serve to strengthen trust and develop confidence in each other. A joint center for the exchange of data from early warning systems and notifications of missile launches can play a very important role in achieving not only bilateral transparency, but also the next level of cooperation between Russia and the West. Only through improving confidence and trust can Russia, the U.S. and NATO come to a mutual understanding of potential threats and areas of cooperation in missile defense.

But if we want this cooperation, we have to be willing to partially disclose to each other plans for national defense, including in the areas of anti-ballistic missile defense, air defense and space systems. Bilateral and multilateral military training exercises would be very useful in this regard. Some specialists believe that there are very few opportunities for cooperation in anti-ballistic missile defense, but we should take into consideration the military research and development plans of all parties involved, which can help find more opportunities, as well as create new ones.

A joint anti-ballistic missile defense in Europe is unlikely to be real, but a cooperative defense achieved through dialogue is possible. Without this dialogue, it will be difficult not only to address mutual concerns related to missile defense, but to also create a positive atmosphere for the development of future arms control agreements.

Peter Topychkanov is the coordinator of the Nonproliferation Program and the Carnegie Moscow Center and a senior researcher at the Center of International Security of the Institute of World Economy and International Relations.