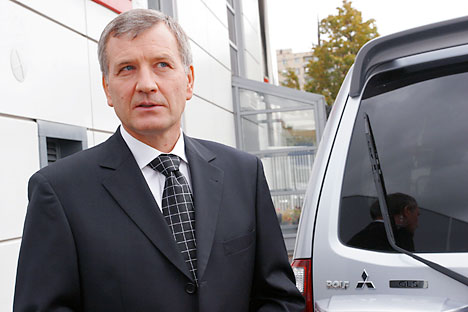 Sergei Petrov cuts a diminutive and modest figure in the midst of the crowd in the lobby of the Ritz Carlton hotel in central Moscow. That's somewhat surprising because Petrov is the the founder of Rolf, Russia’s biggest car dealership. He is probably the richest man in the room by far, and Russians are hardly known for understatement when it comes to displaying their wealth.

A taxi driver who built a car dealership empire, its not only Petrov’s clothes that buck the trend. He grew rich from selling cars, one of Russia’s most corrupt businesses, but it appears that he's remained scrupulously honest while doing it, concentrating on quality of service rather than nefarious schemes.

“We had to be strong and competitive, and we civilized this business,” said Petrov. “In 1992, importing cars was little more than a smuggling operation, and people didn’t know how to make real money. But we always tried to do it legally; later other companies followed us.”

Today Rolf has 28 showrooms in Moscow and St. Petersburg. Business is flourishing. The 2008 crisis hurt Rolf along with everyone else, but in 2010, the company’s turnover was already back to well over $$4 billion, even if profits were halved. Petrov is a poster boy for the potential for real business founded on Russia's rapidly growing middle class.

“Is Russia better today?" he asked rhetorically. "Yes, things are better than when we set out on this path 20 years ago, but we hoped for much more.”

Petrov had a fairly normal Soviet upbringing. He was born in the Urals city of Orenburg in 1954 and became a military pilot; he was force to quit in 1982, after the KGB accused his unit of “anticommunist activities.” He moved to Moscow and re-trained at the Soviet trade university, graduating in trade relations in 1987.

Peristroika and the subsequent collapse of the Soviet Union forced everyone in Russia to reliance on their own resources, but also wiped the slate clean. Petrov had been running the driver pool at Moscow construction company Mosinzhstroy, but left in 1991 to set up his own company providing drivers to many of the international companies moving into Russia.

“We had a fleet of cars and the international companies needed reliable drivers. I drove one and helped the clients carry their cases,” said Petrov.

Petrov obviously got on very well with his clients, so when he approached the head of Mitsubishi Russia for a soft loan to expand his fleet, he was instead given 40 new cars imported from Finland with no down payment and no collateral – a loan he was able to pay off almost immediately as the business flourished. A year later, the newly established Rolf won a tender to become the first official Mitsubishi car dealer in Russia.

Despite the economic chaos and hyperinflation wracking the country at the time, Rolf grew extremely fast. Not everyone had been ruined by the collapse of the old system; Rolf’s first customers were high government officials and the newly minted “Russian mafia,” mostly traders capitalizing on the mismatch between Soviet-era valuation on goods and assets and those in the international markets.

“We earned enormous money [in the early 1990s],” Petrov said. “After Yeltsin introduced trade exemptions for charities as way of funding their work, we were approached by one and imported the cars under this scheme without duties. We had to pay a third of the duties and were making about $20,000 per sale. It was a lot for a small company like ours.”

The first half of the 1990s operated on this huge arbitrage and made multimillionaires out of fast-moving businessmen literally overnight. Petrov told a story of going to Japan to present to carmakers and explaining that the Russian market consisted of the top 5 percent of society who had more money than they could spend, but below that was a retail desert.

“Luxury goods was the only stable market then. The fish were there – mainly high government officials, oligarchs and mafia,” said Petrov. “The rest of society, about 80 percent of the population, had nothing.”

However, as the economy began to pick up, the car market slowly expanded, and by the late 1990s, Rolf had made Mitsubishi the best selling car in Russia outside the luxury segment.

The 1998 crisis was another blow, but it hurt Rolf less than its competitors, as Petrov had already built up several business lines. In addition to retailing cars, the company sold them wholesale to companies, serviced them and had a second-hand sales unit. Competitors concentrating solely on importing were forced to slash costs, but Rolf could sustain itself on its other businesses to absorb the losses from devaluation.

During the first six months of 2008, Russia briefly became the biggest car market in Europe, selling 1.65 million units to overtake former champion Germany. Then the latest crisis hit. Despite the widespread economic problems, sales of passenger cars and light commercial vehicles were up 30 percent in 2010, according to David Thomas, chairman of the Association of European Businesses (AEB). The uplift continues this year, and Russia is set to take back the crown in 2015 according to industry experts.

As it already represents many of the world’s leading brands - including an increasing number of domestically produced foreign brands such as Ford, Toyota, and Volkswagen - Rolf will ride this wave. But building up the business has not been easy.

First, the company has always been forced to grow using retained earnings. “We've never gone to the banks for finances. The cost of money is so high that if you take loans there is no profit,” said Petrov. “The only financing we have ever taken was from Mitsubishi, when we started importing more than 100,000 cars a year in 2007.”

Second, there is the bureaucracy, especially in the import business. Petrov’s solution to this snafu was to build his own car import terminal in St. Petersburg, which takes all logistics out of the hands of the customs service, leaving them only to carry out inspections. This smooths the supply of product to his dealership network.

However, Russia’s lawlessness has been the biggest obstacle. Organized crime reportedly controlled Russia's car distribution networks throughout the 1990s, and imports arrived via schemes designed to avoid what were crippling import duties. However, Petrov declares that he stuck to his principles and insisted all his cars were brought in legally.

“It was a battle of greed vs. fear - and fear won. When we started selling Audis my sales staff were de-motivated,” said Petrov. “Other dealers could offer a $2,000 discount on any car compared to our prices.” However, when Vladimir Putin took over as president and threw oil magnate Mikhail Khodorkovsky into jail for tax evasion, Russian companies started to ‘go white.’ The message was to business was clear: pay your taxes or else. “