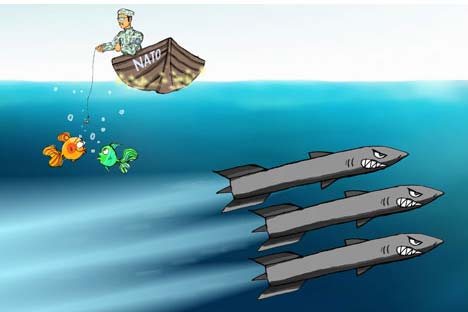 The debate on a joint European missile defense system that gained momentum after the Russia-NATO Lisbon Summit in November 2010 has reached its logical conclusion. On the eve of the meeting of Russian and NATO  defense ministers, the alliance’s secretary general, Anders Fogh Rasmussen, officially declined Russia’s idea of  “sectoral” missile defense and Russia’s demand for legal guarantees that the system would not target Russia. The same was said with total finality at the meeting. The discussion has thus been thrown back to the chronic phase in which it has languished for 10 years (the topic was broached by then-defense minister Sergei Ivanov in the early 2000s).

Does that mean six months of intensive talks have been wasted and the parties have simply been confirmed in their opinion that no strategic rapprochement is possible? It would be odd to expect that close co-operation in such a supremely delicate sphere as strategic security would see a surge of progress after a series of well-wishing but non-committal statements by the parties involved.

Russia’s representative to Nato, Dmitry Rogozin, gave a graphic portrayal of the Russian proposal on joint missile defence as the mutual assistance of two knights standing back-to-back and fending off common enemies that appear before each one. A fine metaphor, but one that also explains the cause of the proposal’s failure: knights would not entrust their life and health to anyone unless they trusted each other  utterly as they faced that common enemy.

Relations between Russia and the United States (who have the final say on missile defense while Europe is merely an onlooker) have certainly improved compared to three years ago. But the challenge is not so much to establish trust as to put an end to an anomalous state of acute mutual suspicion.

That is admittedly not enough to warrant standing back-to-back. Nor has Moscow been seriously counting on it, as evidenced by the other proposal that has been aired in recent months, namely concerning legal guarantees that the U.S. system does not target Russia.

That is a horse of another color. Back-to-back is not the same as formal non-aggression commitments – meaning these things cannot happen simultaneously but only consecutively, with a considerable time lag. First commitments and getting used to each other, and then somewhere a good distance down the road, sectoral missile defence.

But that leads to a vicious circle, because neither side intends to assume obligations. Should ratification by all the NATO member states be required, there are many member countries for which the whole point of the alliance is guarantees not for, but against Russia.

As for the U.S.  Congress, any bill that would seek to limit American military reach – even if it is strictly verified arms reductions such as that agreed under New START – will have a hard time of it. In the case of missile defense, it is hard to imagine any legislative limitations. Some U.S.  congressmen, like the majority of the public, are convinced that missile defense is a strictly defensive system, and therefore no one has the right to demand from the United States that it renounce or reduce its capacity.

Others who see mutual assured destruction as the key principle of strategic stability, parity and interconnection between offensive and defensive components of strategic forces, believe that having a free hand is an inalienable right of the United States and that America should not  follow Russia’s lead.

Finally, there are those who think that the outdated Cold War agenda should be scrapped, as nobody expects Russia and America to go to war with each other; that there are entirely different threats; and that one should let bygones be bygones. The insuperable dilemma is that Russian-American nuclear deterrence, of which the missile defence is a part, is a legacy of a bygone era and makes no military sense today.

It still makes political sense, however, because possession of the largest nuclear potentials still makes Moscow and Washington exclusive partners who must comply with the rules imposed by this interconnection. Attempts to remove it lead to a degradation of relations bringing them to a dangerous line.

America’s withdrawal 10 years ago from the 1972 ABM Treaty, which Russia initially took in its stride, marked the first step towards bilateral destabilization that reached its peak in Fall 2008. It is not by chance that the “reset” finally took off only after Barack Obama renounced George W. Bush’s plans to deploy national missile defense elements in Central and Eastern Europe.

Even today, when the discussion on a joint missile defence is at an impasse, Washington’s current plans (phased deployment of missiles and radar in Poland and the Czech Republic) are much less feared in Moscow than the earlier plans, which at least gives breathing room for a mutually acceptable trade-off.

Months of diplomatic talks and expert discussions on the European missile defense system have not been wasted. Perhaps for the first time, an attempt has been made to discuss the technical possibilities of a nexus between the systems as well as potential common enemies. In other words, the conversation has shifted from the “it cannot be because it cannot be, ever” phase to an “it cannot be, but why?” phase. Not bad for a first try. That lack of political readiness is the stumbling block is not surprising.

The challenge today is to minimize the damage from the lack of a result. That is, a formula must be found that would leave the door open for a continued dialogue while tempering expectations. The next challenge would be to formulate a new agenda apart from missile defense, indeed one reaching beyond the Euro-Atlantic area.

There is a consensus that in the 21st century the Asia Pacific region will be the main strategic arena. It faces the same problems of security and strategic stability that Europe once faced, but the balance of forces and the mentality of the actors are markedly different. Missile defense is a relevant topic there, too, but it must involve China and its concerns about U.S. plans. The problem of Russian-American mutual deterrence will not go away, but in a different context, lone knights may get new ideas.

Fyodor Lukyanov is chief  editor of the magazine Russia in Global Affairs.