White Nights in the Urals 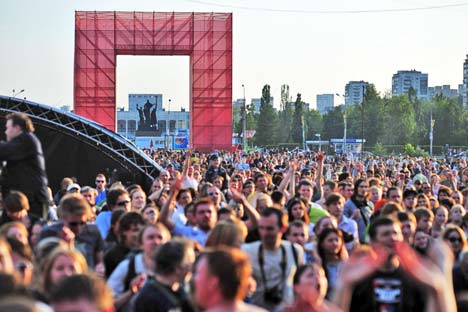 White Nights festival in Perm. All photos by Darya Gonzales

Perm shows how regional leadership can transform the artistic life of a city without relying on federal spending.

In 2008, Perm declared itself the new cultural capital of Russia. In Moscow, this statement was met with humor, St. Petersburg gave a reserved smile, and the city’s neighbors in the Urals gaped in astonishment.

Three years later, it’s still hard to call Perm a cultural trendsetter. And actually it would have been more strange had the city transformed itself in such a short period of time. Nevertheless, Perm today is an excellent example of how the cultural life of a regional Russian city can prosper without any help from the federal government.

Regional centers, more than Moscow and St. Petersburg, have been burdened with the stereotypes of a cultural life dominated by nesting dolls and folk dancing. Now in Perm, the legendary matroyshkas can only be seen in a video installation in a refurbished tobacco factory created in the style of Moscow’s Krasny Oktyabr art complex. On the shabby walls, under the rusty pipes in former workshops, there are works by modern artists from Tver, Saint Petersburg and Nizhny Novgorod. This project is part of the “White Nights in Perm” Festival, which began here on June 1. The festival has turned the entire city into an art gallery. Near the philharmonic hall, there are giant red men riding motorcycles – wooden sculptures by the ProfessorS group from St. Petersburg; in front of the Gorky library, there is a huge apple three meters in diameter covered on one side with ceramic tiles and on the other by a relief made out of bricks. There are abstract constructions made of brushwood in practically every public garden and on the embankments running beside the Kama River.

But the main achievement of this street-level pop art is perhaps the fences. Graffiti artists from all over the world have created works on fences around construction sites and pillars holding up overpasses, turning dull industrial areas into an urban hymn.

"The total area of the walls covered with drawings is about 200 square kilometers," said Sergei Arseniev, creator of the pop art project. "We invited artists from Mexico, Argentina and even from New York. Each of them drew in the style of his country. I think that it takes courage for an artist to bring his creation into the streets. Good skills are necessary here. Anyone can exhibit his work in a gallery – there are ideal conditions, white walls in contrast to which practically any work will look spectacular. But you have to try hard to make it fit into the street landscape."

The White Nights in Perm festival lasts 26 days, and there isn’t one blank space on the calendar, which includes musicians and dancers as well as visual artists. German Singer Pascal von Wroblewsky and the Musica Aeterna orchestra from Bratislava join Theodor Currentzis, artistic director of the Perm State Opera and Ballet Theater, on the musical program.  The headliner of the “Music of Freedom” festival is Chao La Ventura headed by Manu Chao. "It is no mere chance that we chose him,” said Alexander Chaparukhin, who organized the music festival. “A music anti-globalist with the heart of a rock-n-roller fits the ‘Music of Freedom’ Festival perfectly."

The finale of the White Nights is the “Open Space” festival, which features performance art. Its central event is a flight by world champion parachute jumper Valery Rozov. The airman will fly down to the very center of the city from a height of 4,000 meters (13,000 feet). By the time he arrives, there will be stiltwalkers, body puppets and various alien creatures walking along the esplanade.

The White Nights performances draw crowds, but the majority of viewers are vistors to the city rather than citizens of Perm. This fact does little to disturb the festival’s organizers, however.

"People who are not interested in anything live everywhere and they are the majority,” said Boris Milgram, deputy chairman of the government of the Perm Region, “our task in this case is to create a habit of taking interest in something, to open new opportunities for people, so that they can decide for themselves what to watch and what to take part in. The main thing is to have an opportunity to choose. And this in its turn will create the interest. You can't get everything at once."

The case of Perm can hardly be considered typical for Russia. Organizers of guest performances in other cities often face a regional administration that refuses permission to carry out an event, or zones land for a business center rather than an art gallery. In Perm, however, the local authorities have made up their minds to transform the city and to spare no expense. This year, 172 million rubles ($6 million) was spent on organizing the White Nights.