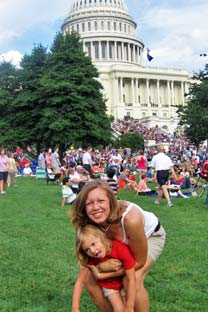 Lara with her daughter Lily at the Capitol

Returning to Washington after a visit back to Moscow leads to a new determination to appreciate the present rather than wish for the past.

Although I wanted to watch Moscow disappear from view through the window of the plane, the utter exhaustion from living through the week I spent there finally caught up with me. I managed to awake with a start long enough to see the domes of the small church outside Sheremetyevo just as the plane turned the corner onto the final stretch of runway. I expected to be crying – I wasn’t sure I knew how to leave Russia any other way. But the fact that I wasn’t probably testified to the presence of a stronger feeling than sadness – the certainty that I would return.

Before I made this trip, I was worried about what it would be like to be in Moscow again after three years. I considered the possibility very strong that I had sentimentalized the whole place in my memories and the reality would be quite different; I considered it equally possible that I would walk around haunted, every turn potentially populated with ghosts. I worried what it would be like to be a tourist in a city I had called home.

What actually happened was something I didn’t expect. The feeling I had was that I never left. I went to work; I had coffee with girlfriends; I went out for drinks with colleagues at the end of the day. I bought textbooks; I bought a metro card; I bought tvorog and baton nareznoi. In short, it seemed as if I had slipped right back into a life that had never really noticed I was gone.

Coming back to Moscow put to rest the emotional torment I had felt since arriving in DC. I no longer needed to grieve for a life that I had built up to fairy-tale proportions and thought was lost forever. Moscow will still be there whenever I am able to return to it. And in a strange way, that knowledge has let me appreciate Washington for what it is, rather than resenting it for what it is not.

Since touching down back in Washington, I have taken stock of what I hope to get out of living here.

Washington is one of the world’s great tourist destinations for families because there are a ton of child-friendly museums, all located in a compact space and almost all free. For my dinosaur-obsessed younger child, that has meant the opportunity to drop in the Smithsonian Museum of Natural History for an hour on a half-day off from school; for my older daughter, who is more into arts and crafts, it has meant a family day project at the National Gallery of Art.

In the center of the mid-Atlantic region, Washington is also a great place to be a triathlete. It’s possible to run and bike outside nearly year ‘round and from April to October, there is a race within driving distance every weekend. I’ve been able to combine races with long weekend trips to other places worth visiting, like Philadelphia and Maryland’s Eastern Shore. I’ve got to get in all my racing now, because I’m not really sure I can handle Winter Triathlon.

And although I would be the first to classify Washington as a quintessentially American city, nearly every country in the world has an embassy here, so there are opportunities unavailable anywhere else. Of course that means cultural heritage festivals and programs like the Kids Euro Festival, but for us, the main benefit is that my daughters can study the official Russian curriculum at the Russian Embassy School in the evenings while attending American school during the day. This chance to be truly bilingual and bicultural is something they wouldn’t have, even in Moscow.

But maybe the most important revelation I had coming back from Moscow was what I don’t have to get out of living in Washington. I don’t have to care about politics any more than I want to – even in a town where all politics truly is local. I can keep abreast of issues I care about, attend events on U.S Russia policy at various think tanks, without getting bogged down trying to follow all the changes in U.S. politics that don’t really interest me. I may have changed location, but it hasn’t changed who I am – a person who could more easily name all the premiers of the Soviet Union than the U.S. presidents.