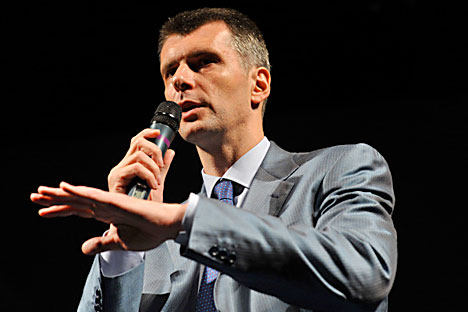 Mikhail Prokhorov hopes to put his business acumen to use as the new leader of Right Cause.

The Kremlin’s ambitious privatization program received a boost with the election of billionaire Mikhail Prokhorov to lead the Right Cause pro-business party over the weekend.

Prokhorov was elected as Pravoye Delo, or Right Cause, leader unopposed at a conference in Moscow on Saturday, bolstering the free market wing in leading government circles that experts say is poised to challenge for more power in the upcoming elections.

And speaking at the Renaissance Capital Investment Conference on Monday, President Dmitry Medvedev’s chief economic adviser, Arkady Dvorkovich, called for a rapid increase in political pluralism in order to push through with economic modernization.

“We need greater political competition,” he told investors. “We see that new political forces are entering the arena, politicians are becoming more active. This can allow us to hope that new decisions will be made as a result of serious discussion and will be more balanced and more predictable. Even though, as in any countries, this can lead to slower decision-making.”

Another party of power

After his election as Right Cause leader. Prokhorov said he plans to make the liberal party the “second party of power” after Prime Minister Vladimir Putin’s United Russia party.

And while Prokhorov’s candidacy for the leadership of Right Cause – a pro-business party that some critics see as having been hand-crafted by the Kremlin – has been in the works for weeks, his election to party chairman marks the first time that big business has openly entered the political arena since Yukos chief Mikhail Khodorkovsky’s failed attempts in 2003.

On Saturday, Prokhorov, who has previously called for a 60-hour working week, shied away from targeting a purely business-oriented constituency. It wouldn’t be right, he was quoted by Kommersant as saying, “to be a party of business and the intelligentsia.”

And Right Cause’s previous slogan – capitalism for all – would have to go, Prokhorov said.

“It’s not true, it doesn’t happen that way,” Prokhorov was quoted as saying. “Capitalism is for people who like risk, and a fair government must offer people social guarantees and support.”

Instead, Prokhorov said party has a clear and ambitious agenda – “to get into the State Duma with the highest possible number of votes.”

As such, its voters are “heads of families – men and women who make important decisions every day.”

He added that if he were offered Putin’s job as prime minister then he would not refuse.

That agenda, some analysts said, made the party well positioned to carry out some of the less popular market reforms that key liberals in the government, such as Kudrin and Dvorkovich, are calling for.

“It is possible that if and when Right Cause gets into the Duma, then the less popular social and economic steps that are being discussed as part of the revised 2020 program should be realized by someone,” said Nikolai Petrov, a political expert with the Carnegie Moscow Center. “I think the Kremlin’s logic is that a liberal force should play the role of a kamikaze – heading a government that will carry out unpopular measures and then it can be replaced. What Prokhorov has been saying could play a role in this context.”

But what was clearly emerging from Prokhorov’s comments was that, while a renewal of the political system was necessary, he had no intention to oppose the status quo.

“We need to remove the word ‘opposition’ from our lexicon,” he said, Kommersant reported. “Because for our citizens, opposition is associated not so much with political parties, but with marginal groups that have long lost touch with reality.”

And in a clear break from the more opposition-minded rhetoric of previous Right Cause leaders – which included members of the Union of Right Forces – Prokhorov said there was nothing wrong with forming a coalition with United Russia if both parties have similar views on some issues.

Analysts say this falls in line with the government’s role in closely monitoring the party’s formation.

“Things like this are always approved and agreed in advance,” said Olga Kryshtanovskaya, a sociologist and a coordinator of United Russia’s liberal wing.

Key officials from Putin’s government – including Alexei Kudrin and First Deputy Prime Minister Igor Shuvalov – had previously been tipped as possible candidates to lead Right Cause.

Prokhorov’s announcement in May that he was interested in the post was reportedly preceded by meetings first with Medvedev and then Putin, where plans for the party were discussed.

Medvedev, who had earlier touted Deputy Prime Minister and Finance Minister Alexei Kudrin as a good candidate for the job, told Moskovskiye Novosti in an interview on June 23 that Prokhorov had “both strong and weak sides” as a leader, and that it was too soon to tell how he would fare with Right Cause.

“After he formulated the idea, we talked about it with him. And he said that he really feels the current situation isn’t fair. He believes he has potential,” Kudrin said.

During a June 27 meeting with Prokhorov, Medvedev called some of his ideas “revolutionary,” RIA Novosti reported. According to Kryshtanovskaya, this falls in line with government plans to establish more than one party – plans that go back to Putin’s second term as president.

“It looks like there will be two parties in the corridor, a right-of-center and a left-of-center,” Kryshtanovskaya said. “But the parties will have various wings.”