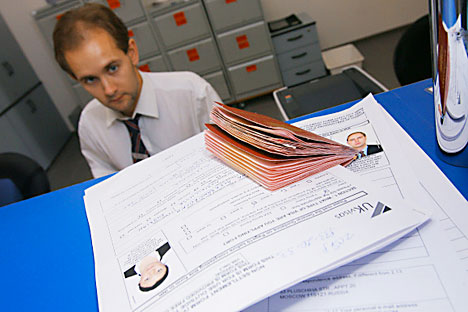 As an Englishman, I don’t tend often to quote our cousins from “across the pond” in the United States. However, I gladly credit the inspiration for this column to John Beyrle, the US ambassador to Moscow, who said at the St Petersburg Economic Forum: “Bureaucracies are bureaucracies; businesses get things done”. Ambassador Beyrle was referring to the mutual decision by the US and Russian governments to ease visa restrictions for their citizens visiting the other’s country. Soon, US and Russian citizens will be able to obtain three-year multiple-entry visas without even needing to get a letter of invitation. Marvellous. Are you watching, United Kingdom Border Agency?

The matter of visas between the UK and Russia exercises members of the Russo-British Chamber of Commerce more than almost any other. The process of obtaining a visa for Russia is bureaucratic but fairly straightforward, especially if you go through an agency. There are some absurdities on the visa form, like “Give the telephone number of your university”, and a requirement to list all of the countries you have visited in the past 10 years; but on the whole the process is relatively quick and painless.

Oh, but pity the honest Russian businessman who wants to come to the UK. Even for the basic six-month visa, a Russian must apply to the consular section at least 15 working days before the visa is required, and leave a passport with the application. If, in that time, you need to travel anywhere else, you have to retrieve your passport and then start the whole procedure all over again.

If you’ve been a good boy or girl (ie, visited the UK on several occasions, and showed that you were ready and willing to go home again and not disappear into the English hinterland) you can apply for a two- or five-year visa. This takes 28 working days (in real terms, a month and a half).

Now, if this procedure meant that fortress UK was protected against an influx of undesirables, I would agree that, awkward though it is for honest visitors, it was worth doing. But in practice, the UK visa system serves more as a hindrance to people wanting to do business than it does as a deterrent to the undesirables. And to make things worse, bureaucrats have a tit-for-tat mentality. So the harder it is for Russians to obtain a British visa, the greater the likelihood that it will be more  difficult for Britons to get a Russian visa.

For once, I should be delighted if we were to take a leaf out of the Americans’ book. It’s high time that the bureaucrats realized the benefits that international business brings to the country and made the visa process simpler or – shock, horror – abolished it altogether. This, of course, is unlikely to happen any time soon. Apart from the fact that bureaucrats would lose their self-perpetuating jobs, it smacks too much of common sense. And that’s a commodity that’s all too rare in bureaucracies the world over.

Stephen Dalziel is executive director of the Russo-British Chamber of Commerce.