Meteorite strike? Russia can take it! 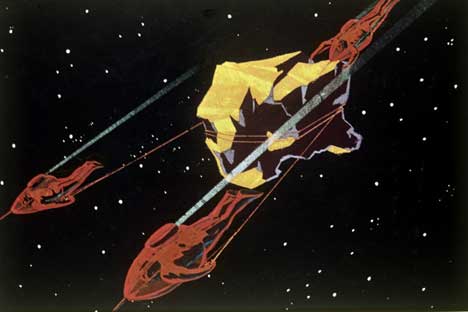 If a large asteroid falls on the earth then the fallout will be huge and life as we know if comes to a choking, flaming end. But if it’s a small one then Russia can take it. That’s more than can be said for Europe and North America, whose people can kiss the world goodbye if anything lands on them.

The reason is not that Russians are hardier than everyone else but that with its expanses of open space, covering one fifth of the world’s land surface, Russia could take the strain.

An asteroid the size of a truck skimmed past Earth four weeks ago, coming closer to us than the moon ever has. The 7-meter lump of celestial rock, named 2009 BD, came within 346,000 kilometers of Earth at around 9:51 pm Moscow time The moon’s average distance from us is about 385,000 km.

So it, was relatively speaking, by a gnat’s whisker that a calamity approaching the Hiroshima bomb bypassed humanity. But so long as the heavenly bombshell was that small Russia would be alright, according to the NEOimpactor (from NASA’s “NEO” or Near Earth Object program).

The ten countries that would be the most affected are China, Indonesia, India, Japan, the United States, the Philippines, Italy, the United Kingdom, Brazil and Nigeria, because of their dense populations.

Only a century ago

“The consequences for human populations and infrastructure as a result of an impact are enormous,” Nick Bailey, one of the NEOimpactor software’s authors, told the University of Southampton, as reported by the Daily Galaxy.

“Nearly one hundred years ago [in 1908, the remote Krasnoyarsk] region near the Tunguska River witnessed the largest asteroid impact event in living memory when a relatively small object (approximately 50 meters in diameter) exploded in mid-air.

“While it only flattened unpopulated forest, had it exploded over London it could have devastated everything within the M25,” he said. It took scientists until 1927 before they reached the site of the blast, and the devastation they found two decades later was colossal.

Running out of time

In 2028, the asteroid 1997XF11 will come extremely close to Earth but should miss the planet. If something were to change and it did hit Earth, what you would have is a mile-wide asteroid striking the planet's surface at about 50,000 mph. An asteroid that big traveling at that speed has the energy roughly equal to a 1 million megaton bomb, engineer Marshall Brain wrote for Discovery Company How Stuff Works. An asteroid on this scale is potentially 10 million times more powerful than the Hiroshima bomb.

The amount of dust and debris thrown up into the atmosphere would block out the sun and cause most living things on the planet to perish. If an asteroid that big were to land in the ocean, it would cause massive tidal waves hundreds of feet high that would scrape everything off the coastlines where they made landfall.

While the timescales may seem colossal compared with a human life lasting for a few decades, the craters dotting the surface of the Moon and the inner planets show that in galactic terms these crashes are frequent events. They happen more or less every 100 million years and the last one was 70 million years ago, believed to have been responsible for wiping out the dinosaurs.