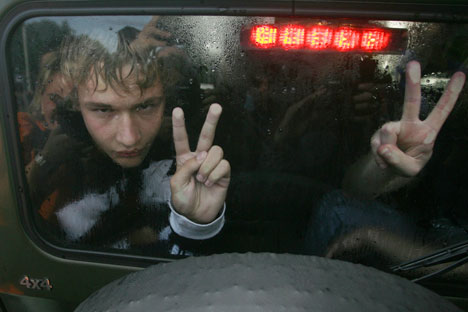 As low-scale protests continue in Belarus, the opposition will need to harness discontent over the economic crisis to threaten the regime.

Belarus’ latest “silent protest” was roughly quelled on June 29 in Minsk as police detained more than 200 participants in the demonstrations. In Belarus, zero-tolerance, heavy-handed crackdowns on opposition demonstrations are nothing new, but the protests are growing in size and extending beyond Minsk at a pivotal moment for Belarus, when analysts are looking closely for signs that the country’s economic crisis is weaking the current regime’s grip on power. Yet in a country where dissatisfaction does not equal political activism and the opposition is viewed with some suspicion by rank-and-file Belarusians, Alexander Lukashenko should not yet be counted out.

“It was Belarusian special forces, spetsnaz, and police officers. No one presented documents, despite laws saying that it is necessary. They were simply hunting for people. They attacked protesters, manhandled them and threw them into buses,” said Vladimir Labkovich, a representative for the Minsk-based Viasna human rights organization. So ended the latest manifestation of the “silent” protests, weekly demonstrations largely organized through online social networks in which participants express solidarity solely by clapping. According to Viasna, as of yesterday evening around 60 of those detained had been charged with hooliganism, which carries a 15-day sentence in the country.

As Belarus sinks deeper into a staggering economic crisis that erupted in May, the possibility of growing unrest has been cited as a serious danger to the regime. While Belarus attempts to keep a handle on the domestic situation, where a devaluation of the Belarusian ruble has led to massive shortages and increased hardships, it is also being squeezed by Russia to sell state-run assets in exchange for financial support to pull the country out of the crisis. Yet this strategy also presents its own dangers, note analysts, who say that a possible loss of sovereignty to Russia could seriously decrease Lukashenko’s stock before the Belarusian people.

Considering the harsh punishments that Belarus has meted out to political protesters in the past, the modest growth in the size of recent demonstrations shows that serious dissatisfaction with the regime is growing: estimates put the crowd in Minsk on Wednesday at 3,000 people, and the protests have spread into regional cities beyond the capital where the population is older, more conservative and more pro-Lukashenko. Nonetheless, those protesting are still overwhelmingly young and focused on political freedoms rather than the economic crisis, said Labkovich. “They are protesting the economic crisis, but it’s definitely a secondary issue,” he said. “The crisis has not replaced the primary issue of political freedoms in these protests.”

Part of the problem is Belarus’ fractured political opposition, which even those fed up with the regime are suspicious of. The leaderless silent protests, which eschew party speeches and political chants, are reflective of the opposition’s shift away from political parties and toward grassroots movements, which has also been the case in Russia recently, where bloggers like Alexei Navalny and local initiatives like the Khimki opposition are starting to share the mantle with traditional political opposition parties.

Yet for the opposition, part of the problem also rests in how exactly to attract a critical mass of protesters, noted Anais Marin, a researcher in the EU’s Eastern Neighborhood and Russia Program at the Finnish Institute of International Affairs. “In Belarus social unrest does not necessarily result in a rise in political activism,” she said. To harness rising discontent in Belarus, she added, the opposition will have to attract a different demographic: those with primarily economic concerns who are tired of a regime that has broken a contract to safeguard their economic well-being. “Most analysts favorable to change in Belarus advocate that the opposition turns to this ‘undecided’ group, who traditionally do not support it, that it should listen to their claims and incorporate them in its program and proposals for reforms, rather than merely trying to use the popular movement of unrest to meet its own power-seeking goals,” said Marin.

In an op-ed written in The Moscow Times, Michael Orenstein, a professor of European studies at Johns Hopkins University, argued that with Belarus’ economy in free-fall and Belarus seemingly without a lifeline, “Lukashenko’s days appear to be numbered.”

Yet the critical element that remains to be seen is where the pressure to push Lukashenko out will come from, and whether an opposition movement will be able to effectively harness the dissatisfaction of mainstream Belarusians. It will also depend heavily on several factors beyond local control, including how aggressively Russia continues to play its hand to buy up assets in the country, and on Lukashenko himself, who “still has a trick or two up his sleeve and incomparably greater ‘administrative resources’ than most other dictators in the world to stay in office,” said Marin. “I would not take the risk of prognosticating the collapse of a regime that has held onto power for 17 years. Knowing his psychology, I believe he would never give up to pressures, from the street or the Kremlin alike, even if he is pushed into a corner,” she said.