India is a partner in Russia’s modernisation 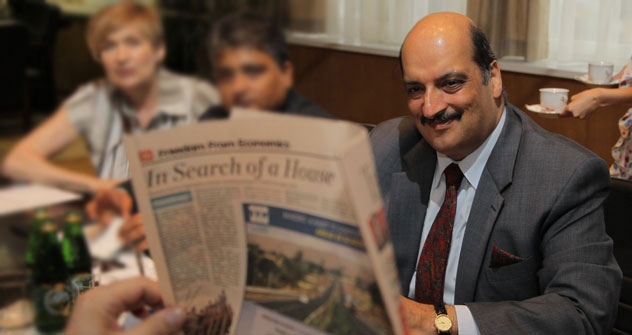 Indian ambassador to Russia Ajai Malhotra is upbeat about the prospects of relations between India and Russia in all areas, ranging from defence and trade to culture and tourism. In this wide-ranging interview with Rossiskaya Gazeta, the Indian envoy assures that despite increasing competition, India and Russia have “a dynamic and growing defence relationship, not a waning one.” He also underlines an emerging partnership between the two time-tested partners in fields of innovation and modernisation.

Is India satisfied with the development of Russia-India cooperation in the military-industrial sector?

Our defence cooperation is progressing well and is one of the important pillars of our special and privileged strategic partnership. The Indian armed forces use a very large quantum of Russian defence equipment.  Over the years, our bilateral military-technical cooperation has transformed from a simple buyer-seller relationship into one involving joint research, joint development and joint production of advanced defence systems. We will continue to consolidate our military-technical cooperation in a long-term perspective and also deepen service-to-service cooperation.

There is an opinion that India has been gradually winding down defence cooperation with Russian companies, while it seeks partnership with arms manufacturers in other states. Is it true?

It is not true; in fact the new trend in our relationship clearly negates such an opinion. I refer to our joint R&D and production of sophisticated weapon systems and platforms. The Brahmos cruise missile is a good example of this. Besides Brahmos, projects for the manufacture of T-90 tanks and SU-30MKI fighter aircraft are also being undertaken in India. More than that, we are jointly developing the Fifth Generation Fighter Aircraft. Similarly, we are co-developing a Multi-role Transport Aircraft. These joint design and development projects for new weapon systems and platforms provide further compelling evidence that our military-technical cooperation is indeed progressing well. Russian arms manufacturers are, of course, facing stiff competition in the Indian market from the arms manufacturers of other countries. However, such competition has been around for decades, and our bilateral defence linkages have grown apace alongside it. There are numerous instances when Russian companies have proved highly competitive and emerged as our valued partners in meeting the requirements of India’s armed forces. Russia remains by far India’s biggest partner in the military-technical cooperation and vice versa. This is tangible confirmation of a dynamic and growing defence relationship, not a waning one.

About five years ago experts mentioned that the development of Russia-India cooperation in the military-industrial sector had slowed down due to the absence of high-grade service constituent of the Russian military-industrial complex.  In other words, Russian combat aircraft are high-grade, but their servicing in India is not always first class.  Has this problem been settled?

Issues relating to after-sales support of Russian defence equipment have been receiving attention at the highest levels. We appreciate the special care being devoted to this important issue by the Russian leadership. Both sides have adopted innovative steps to address concerns that have emerged from time-to-time. In 2009, we signed an Inter Governmental Agreement on After-Sales Support. We have also adopted new mechanisms to better meet our concerns, such as long-term contracts for supply of spares with in-built price escalation clauses. Defence cooperation issues are also regularly addressed in the Inter-Governmental Commission, co-chaired by our two defence ministers, and by several senior official level mechanisms, such as its High Level Monitoring Committee that met in Moscow last month. This is an issue that is being jointly, thoroughly, and continuously monitored and addressed to mutual satisfaction.

You participated in St. Petersburg International Economic Forum.  What are your impressions?

The St Petersburg International Economic Forum has quickly emerged as a major global economic event that one cannot afford to miss. It routinely attracts prominent personalities from across the international business and political spectrum. I warmly congratulate the SPIEF organizers on this remarkable achievement. The tremendous progress that Russia has made over the last decade or so was evident at SPIEF. I could see that key elements of a dynamic and market-based economy are in place. Growth has resumed in Russia after the recent global economic slowdown and an ambitious economic modernisation programme is underway.

Since last year we have made SPIEF the venue for the “India-Russia Business Dialogue”. It brings together prominent leaders of Indian and Russian industry with senior ministers and government representatives and provides a platform for business interaction. Both India and Russia are large, growing economies, with dynamic and innovative entrepreneurs, and our complementarities are evident. Our leadership has placed special emphasis on such direct B2B linkages as an instrument to exploit substantial business opportunities that remain untapped. Our governments are providing an enabling environment in which our business communities can lead in charting our future cooperation. I am happy to confirm that India will further enhance its presence in SPIEF next year.

What is India doing to boost the number of tourists coming from Russia?

Tourism not only generates earnings and employment but also facilitates friendship, mutual understanding, and goodwill. It enhances people-to-people contacts, strengthening the foundations of our strategic partnership and nurturing it for the future.

Soon after my arrival in Moscow, I heard from Russian friends of the delays associated with getting an Indian visa and the speed-breaker effect that this was having on our trade and tourism. To address this, I recently instituted changes that reflect a more liberal tourist and business visa regime for Russian citizens travelling to India. Thus, tourist visas are now being delivered in three working days after the date of application.  Their validity has been increased from the earlier one-to-three months to six months, with triple or multiple entries being allowed, compared to a single or double entry earlier. Additionally, instead of taking ten or more working days to issue a business visa we are now doing so in three working days. Finally, while we were earlier issuing a three or six months business visa with a single/double entry, we are now routinely granting a one year multiple entry business visa.

These changes will enhance tourist and business flows from Russia to India. We issued about 110,000 visas to Russian citizens in 2010, the overwhelming majority to tourists. I hope to see this number expanding by at least 25% in 2011.

Innovative technologies have been developing fast in India.  In what ways can India help in developing Russia’s Skolkovo innovation hub?

The Skolkovo innovation project aims at creating an environment for innovation by promoting R&D in laboratories, providing finance by encouraging venture capital, and enabling a business-friendly environment for companies to transform the R&D of the laboratory into a commercially viable product.

In the context of Skolkovo, India can be a reliable, long-term partner in Russia’s modernisation programme. Our companies have the capacity to invest and have the technological edge in many sectors. India can be a technology source for Russia in IT, pharmaceuticals and hydrocarbon processing. It can be a dependable partner in long-term arrangements concerning diamond-processing, fertilisers, and hydrocarbons. Together we can explore business opportunities in sectors such as biotechnology, bioinformatics and nanotechnology.

Many Indian companies have substantial capabilities in all three stages of the innovation cycle. We would like to see Russian companies becoming more aware of these capabilities and Indian industry becoming more aware of the opportunities that exist in Russia. Towards this end, greater exposure is needed to each other’s latest achievements so that we are not be bound by old mindsets and stereotypes. The potential for cooperation is huge.

Experts say BRICS grouping (comprising Brazil, Russia, India, China and South Africa) has a huge potential. From India’s point of view, what does BRICS lack, in which direction should it develop, and how important is this organisation for Delhi?

BRICS occupy a strategic position both geopolitically and from the perspective of the global economy. Collectively, the five BRICS countries account for nearly 30% of the world’s land area and 42% of its population. They are also increasingly becoming the main drivers of global economic growth. The group has traversed much distance in terms of the influence it wields and the attention it attracts across the world.

India is committed to implementing the ambitious Action Plan announced at the recent BRICS Summit at Sanya in China. India’s aspirations for BRICS envisage that our countries join hands to ensure a peaceful and orderly transformation of the world order, so that it better reflects contemporary and emerging global realities. This is important not just in the realm of political and security governance structures, such as the UN Security Council. It applies equally to the reforms needed in global financial, monetary and trade systems so as to enable the world to better address economic crises of the type we saw in 2008-09.  We need to work even more closely to tackle terrorism, extremism and intolerance, and such new threats to our large and diverse societies as organised crime, drug trafficking and piracy. As my Hon’ble Prime Minister put it, cooperation among BRICS “holds the promise of building an external environment for ourselves that helps each of us and complements our task of nation building”.

What can Indian people learn from Russian people, and vice versa?

Our peoples and civilizations have intermingled over the centuries. The Tver merchant Afanasiy Nikitin came to India in 1469, well before Vasco da Gama! Indian merchants first arrived in Astrakhan in about 1615 and lived there for several centuries. Gerasim Lebedev of Yaroslavl spent ten years in India from 1785-1795. Leo Tolstoy’s profound impact on Mahatma Gandhi is well chronicled. Rabindranath Tagore came to Russia in 1930. There is also a rich tradition of Indology in Russia, while Indian dance, music, yoga and films are quite well known here. Overall, Indians and Russians have much in common – both are hard working and entrepreneurial, love art, music and dance, like to energetically discuss and debate all sorts of issues, and are by and large more soulful with a stronger sense of family values than others. So, perhaps while learning from each other we should continue to be even more like each other!

Russia has a lot of Chinese, Japanese and European restaurants, while the famous Indian cuisine is hardly present....

Moscow, St Petersburg, and Kazan have Indian restaurants and you can even find an occasional one in Yekaterinburg, Nizhniy Tagil and Vladivostok. Some have made a name for themselves on the local gourmet circuit. However, the preparation of Indian cuisine is more complex than most others, requiring Indian chefs in supervisory roles at least till local talent learns the tricks of the trade. More easily obtainable work visas would help in bringing in Indian chefs, cooks and other staff. This would boost the number of Indian restaurants here, while providing employment opportunities to Russian managers and staff. I would love to see more Indian restaurants opening across Russia and a wider variety of regional Indian cuisines available here.