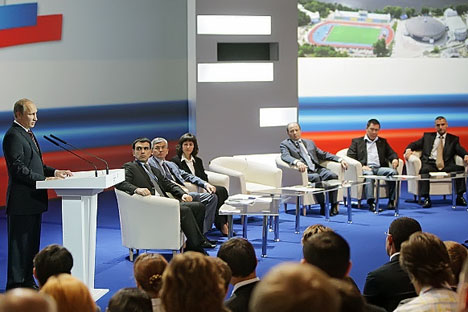 The prime minister also said one of the government's top priorities is to put conditions in place for small and medium businesses to operate in the oil sector. The development of small fields and raising well flows is a considerable reserve for sustaining oil production at 500 million tons, he said.

Major investment is needed in exploration, oil recovery and new technology, the prime minister said. Putin said 60 percent of the 500 million tons of oil that the country produces comes from the West Siberian oil province. "I again ask the Finance Ministry and Economic Development Ministry to look at the profitability of … small fields and to build a midterm policy," he said.

Putin said the ministries should analyze taxation in the course of this work. "If [tax breaks] cannot be introduced right now, let them show when this will be possible, so that small business are able in the long term to plan their work, their incomes and expenditures," Putin said.

Small oil companies should not expect tax breaks in the short term. "The oil and gas sector is considered to be profitable and it does not need special tax regimes. Small fields are usually in regions that have communications and infrastructure as a rule. At a time when the budget is not balanced, the fiscal agencies, above all the Finance Ministry, object to lower taxation and tax breaks. It is difficult to argue with this for now," Putin said.

Indeed, the government is raising taxes for the gas industry. But the government will "definitely return" to the issue of tax breaks for small oil companies once the budget has been balanced, Putin said.

The prime minister also addressed Russia's presence in the Arctic, saying the country is seeking to expand and will "firmly and consistently" defend its geopolitical interests in the region.

Putin also addressed the possibility of upgrading the Glonass satellite system. "Satellites were rather old and quickly broke down at the beginning of the program. The period of their useful life was three to four years," he said. Now the government will replace them with more modern satellites with a useful life of seven to 10 years, Putin said.

"The land-based infrastructure is the main problem," he added. "It would be cheaper to make that equipment in China, India, South Korea and so on. However, the production of the equipment with good quality and good prices inside the country would be absolutely perfect," Putin said. It is also necessary to form a civilized market of services. "We must control the domestic market and take relevant niches on the world market," he said.

This article first was published in The Moscow Times