Cinderella gets a makeover 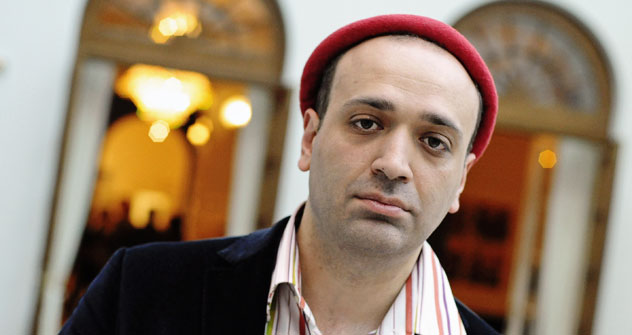 Georgy Isaakyan is considered a young gun in Russia. He brought Alexander Solzhenitsyn to the stage and orchestrated “Fidelio” in a Gulag museum. But now he is tackling a new challenge: children’s operas.

The conductor taps his baton as a pianist in the orchestra pit follows his movements intently. Up on the stage, a tenor raises up into an exuberant aria. As the choir joins in, the tenor falls to the ground, tossing about wildly. “Cut!“, booms a deep voice from the auditorium. Everything stops immediately. Then a dark-haired, well-built man in jeans, tennis shoes and a loose-fitting shirt leaps up onto the stage. He runs about, gesturing wildly, drops his large notepad and then throws himself to the ground. “Like this!”, he says emphatically, demonstrating the move he wants to see.

Director Georgy Isaakyan, 43, is conducting a rehearsal for a children’s opera about princes and oranges, evil sorceresses and heroes. He declines to divulge anything further, but, he promises, “It will be twisted;” his eyes light up impishly as he speaks.

In the maze-like corridors scattered about the Children’s Musical Theater, named after its founder Natalya Sats and the only one of its kind in the world, Georgy Isaakyan seems completely out of place. On the way to his office, Isaakyan admits that he sometimes thinks so too.

It smells of decay

A year ago, Isaakyan took on the job of both producer and director of the “mother of all children’s theaters.” Natalia Sats, the theater’s namesake and its director until her death in 1993, was a tough act to follow. She was friends with Igor Stravinsky, played music with Albert Einstein and inspired Sergei Prokofiev to compose “Peter and the Wolf,” which had its premier within the theater’s walls.

But all this was many years ago, and today the theater smells of decay. The dusty, ramshackle boards and the parquet tiles on the main stage are a battered mess, and the repertoire itself is also passé, consisting mainly of Soviet-era works.“

As Isaakyan walks through the theater, he passes Natalia Sats’ office. It has remained locked since her death, and a gilded nameplate adorns the door. The theater staff speaks reverently of her in hushed tones.

Isaakyan throws a pensive glance at the door. “My goal is to create a new theater, one with a unique atmosphere, unparalleled and one full of verve,” he said energetically.

Challenges are nothing new to Isaakyan. After completing his studies in Moscow, the director, went to Perm to become director of the city’s opera house. When he arrived there in the early 1990s, the storied 140-year-old theater was in a state of disrepair; singers, directors and dancers were all departing en masse. But the young director with a shy smile saved the opera house – and made it famous. “We staged productions that had never been done before,” he said, beaming at the remembrance.

His most important contributions include the opera “A Day in the Life of Ivan Denisovich,” based on Alexander Solzhenitsyn’s novel, and a performance of Beethoven’s sole opera “Fidelio,” which Isaakyan brought to the stage in the former Soviet forced labor camp Perm-36.

Now Isaakyan is tackling children’s opera. He is fully aware that young audiences are no longer so easily swayed by the traditional language of the theater. “Cinderella done like it was 30 years ago will not bring any young people to the theater,” he said.

Suddenly, he hurries off to the office door and turns up a small black speaker. It is the middle of the afternoon and a children’s opera is taking place on the main stage. Isaakyan listens intently for a few minutes before he furrows his brow and continues on his way.

”Children today know a lot more about the world. The simplified language of fairy tales no longer resonates with them since they are confronted with violence, terror, pornography and drugs on a daily basis, play computer games and surf the web.” Instead of using imagery, one has to approach them directly and speak to their problems.

”I do not believe that humanity has evolved for so long just to end up sitting in an office in front of a computer,“ Isaakyan said. Only culture is able to preserve the humanity in humans, “to retain those values that are becoming scarcer by the minute.”

One of the biggest problems facing Isaakyan’s work isn’t the children – it is their parents, who make up at least half of the audience. Their childhoods 20 years ago were marked by privations; their own parents were fighting for their very survival and had nothing to spare for culture. “They have a lot to make up, and, theatrically speaking, we have to simultaneously take two different target and age groups into consideration. Isaakyan hopes that his reinvigorated Natalya Sats Theater will be more “user-friendly,” a place where children, parents, and even grandparents can all feel at home.