From bulldozer to auction block 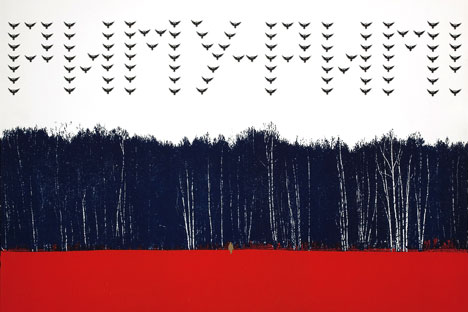 A London gallery celebrates the once radical art of the Soviet Underground.

A London gallery is hosting a comprehensive exhibition of art by the 1970s group, loosely known as the Moscow Conceptualists. The works include archival pamphlets and photographs, abstract paintings, funky sculptures, cans with words, wooden chickens and hundreds of library catalogue cards with messages on them. The styles and media are diverse. But many were assertions of artistic independence, at odds with the socialist realist style sanctioned by the Soviet authorities.

Thirty-seven years ago next month, a group of Russia’s underground artists showed their subversive artwork in a vacant lot outside Moscow. The response of the authorities was fast and furious. The works, all of them celebrations of free expression, were doused with water cannons and razed by bulldozers.

The show was destroyed, but the artists that day became relevant to the world. The Bulldozer Exhibit was a watershed moment for Russia’s rich Noncomformist art movement, which many say helped to usher in perestroika. For some artists, the exhibit brought pain, exile and prison. A few were catapulted to fame and a vibrant career abroad.

The aim of this exhibition is to put these works in a historical context. The basement walls are covered in quotations from the artists, looking back on their years of radical experiment. The converging rays of Erik Bulatov’s 1966 “Ulitsa” (street) and Vitaly Komar’s small, cubist canvasses hang near a slideshow of shots from the 1974 “Bulldozer exhibition,” the show in a forest considered so dangerous it was forcibly broken up by police. The show changed the artists lives and, in the long run, after coverage in the Western press, came to represent the push for an open society.

This unofficial school of conceptual artists includes Ilya Kabakov and the once towering SOTS-art team Komar and Melamid, Russia’s answer to pop art. They have since split, but both Vitaly Komar and Alex Melamid are hugely successful artists living in New York.

Some of these artists have long been popular in the West but only recently have become known in Russia. When Daria Zhukova founded the ‘Garage’ Center for Contemporary Culture in a constructivist bus garage in Moscow, the opening show in September 2008 was a major retrospective of work by Ilya and Emilia Kabakov.

It included their satirical installation, “Red Wagon,” which they have since donated to the nascent contemporary collection of the State Hermitage Museum in St. Petersburg. Inside the wagon, the Kabakovs painted scenes of Soviet utopia and played stirring patriotic music; outside the door is a pile of rubbish. The works of Kabakov, Komar, Melamid and Bulatov, and others now sell at auction for spectacular prices.

There’s not much room in the Calvert 22 gallery for these ambitious works. Instead, the emphasis is on more portable, documentary materials, like the rope used by the Collective Actions Group. This group of conceptual artists produced artworks that seem mostly to have consisted of standing around in windswept fields with a variety of symbolic objects and taking photos, a radical deviation from the concrete, up-beat realism of official Soviet art.

“There’s Nothing Serious in Art”

The show’s title is “Pole Deistviya” (Field of Action). It comes from one of Andrei Fillipov’s minimalist prints, showing footprints across a snowy field towards a line of birches with the words spelled out by stylized birds in the sky. The work is a 21st-century visual tribute to photos of the 1978 “Time of Action” event staged by the Collective Actions Group.

Nikolai Panitkov’s recent “Secularization” is one of the larger pieces in the exhibition. Six, empty white coats (the dead husks of Soviet bureaucracy) hang from red branches above yellow steps. The wooden chickens, pecking their way down the steps, symbolize – according to one of the curators, David Thorp, – “those who used to live off the system.”

Panitkov sees himself as part of a postmodern generation, more ironic than the earnest structuralists of the 1960s and 1970s. “We have stopped taking things so seriously,” he said, but earlier pieces exhibit a similar playfulness.

Andrei Monastyrsky’s 1978 “Palets” (finger) illustrates his own dictum: “There’s nothing serious in art.” The piece consists of a wall- mounted box with a circle through which you can poke a finger so that it points directly at you. Ilya Kabakov, mostly represented here by a series of cryptic samizdat albums, also draws attention to the role of the viewer in art: “the spectator is always right.”

Andrei Monastyrsky and his object Finger, 1979. Photo: A. Abramov. Courtesy A. Monastyrsky.

Like Moscow’s Garage, the new Calvert 22 gallery in Shoreditch is a not-for-profit foundation, funded by private money. Its director and founder Nonna Materkova, a corporate finance consultant, told the press in 2009, when she opened the gallery that she was fascinated by “this relationship between Russia and Britain” and wanted to show Londoners a deeper side of her native culture.

The artists in this historic show seemed to avoid criticism of Russia’s current status quo. It is, perhaps, safer and more lucrative to be satirical about the old, Soviet evils. But the recent works continue to pursue the artistic need to experiment that Thorp sees in the “dynamic spirit of unofficial art in the U.S.S.R.”

“Who knows where art is taking us?” he asked, describing the whole project as having “a particularly interesting energy.” He added: “I can’t think of a comparable movement in Britain, not one that manifested itself in such a visual and intellectual way.”