If Gaddafi folds his tents... 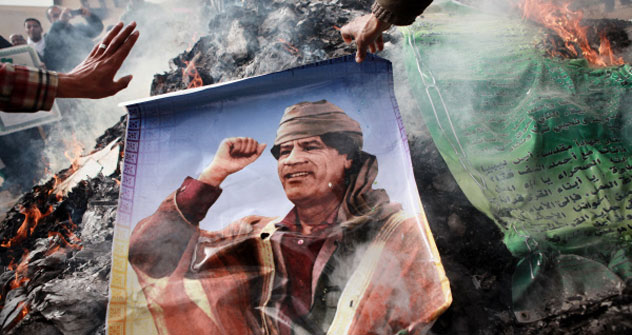 "Information about negotiations about Gaddafi stepping down or seeking a safe refuge inside or outside the country is simply untrue," Libyan government spokesman Moussa Ibrahim told Reuters on July 5. But, as that momentary sensation draws to a close, another one is just beginning. At its summit in Equatorial Guinea this weekend, the African Union recommended that all 54 of its members ignore the order of the International Criminal Court (ICC) issued for Gaddafi's arrest. Otherwise, it reasons, there will be no hope of an end to Libya's strange "pseudo-war."

The news of the African Union's recommendation borders on scandal - the ICC has not received such a strong slap on the wrist in some time. However, that news, like all news of African plans to address the conflict, was published almost as an afterthought in Western reports. This is how The New York Times modestly presented the diplomatic discussion of Libya on the sidelines of the Russian-NATO Council in Sochi:

But the issue cannot simply be ignored - particularly when the kernel of the current diplomatic stalemate is not only what to do with Gaddafi but how to treat him. Is he to be approached as a criminal, the leader of one side of a civil war, or its victor?

Progress in Russia's relations with NATO in Sochi is a separate subject. But one should note that South African President Jacob Zuma, who is holding talks on Libya on behalf of the African Union, was also in attendance in Sochi. On Monday, before discussing the issue among NATO representatives, he met with President Dmitry Medvedev, who is also working on brokering a peace at the request of the recent G8 summit in Deauville.

Russia and Africa's policies on Libya are not always the same. Each side retains its independence, but their attitudes generally run in parallel.

The African Union is promoting a logical solution: signing a ceasefire agreement and creating a transitional government in Libya. That government should be technical rather than political and should exclude the politicians and ideologists of both camps - Tripoli and Benghazi. Once this is accomplished, the country could move forward, conditionally speaking, and elect new leaders. That condition would be primarily an inter-tribal agreement, which, in a Bedouin society like Libya, must precede any election. Otherwise, for example, if the eastern half of the country votes against the west, a simple numerical advantage will again result in a nation divided rather than a clear and legitimate victor.

So, what stands in the way of the African initiative?

Mr. Zuma has been involved in trying to end the conflict in Libya for some time now. The African Union adopted a roadmap to peace in April, following on the heels of the NATO bombings that began on March 19. Clearly, the union's diplomatic efforts are directed at NATO rather than at Libyans of either side, and, so far, NATO has stubbornly rejected even its most reasonable proposals.

Let's admit to a few things that aren't going to be pleasant for anyone. Despite his increasingly bizarre behavior, Col. Gaddafi is the victor of the conflict for the time being, especially considering the fact that he is fighting not only his own people but also NATO, the war machine of the United States and most European countries. Fearsome beast that it is, NATO has little hope of defeating him.

There's no proof that if general elections were held tomorrow, Gaddafi or his vocal son Muhammad would receive unanimous support - even in the western half of the country. But as long as NATO continues to bomb Libya and not a single bomb hits Gaddafi, he will be considered a victor and enjoy relative popularity at home.

For NATO - or for Europeans, to be exact, now that America's involvement in the Libyan mission has become increasingly half-hearted - Gaddafi's death or resignation is the only possible solution. This is the minimum requirement, so to speak. Considering the sad state of affairs in revolutionary Tunisia and Egypt, Libya's democratization is a slogan that few people can take seriously. But at least Gaddafi's removal wouldn't be considered a defeat. And his ongoing reign would be considered a disaster.

Therefore, the diplomacy around Libya currently revolves around the question of Gaddafi's departure. The African Union is involved in these efforts. But Gaddafi will not leave Libya with a pending order on his arrest, and the Africans are absolutely right to recognize that. Meanwhile, the Europeans object that recalling the ICC's order would be tantamount to expunging him of any guilt.

There have been information leaks for more than a month that Gaddafi is about to receive guarantees of immunity from every country but France, fold his tents, and leave. And there is no doubt that the issue is being discussed, but, so far, results remain to be seen.

The absurdity of the conflict is a heavy blow to European identity and the ideological foundations of European civilization. From a purely ideological point of view, Libya could provide some consolation for NATO's failure in Afghanistan, where no military victory has been scored and no European-style democracy erected. European soldiers followed the Americans there only to find out that their electorates knew better and wanted a swift withdrawal. Those who haven't pulled out yet are now leaving. Libya at first seemed to offer an opportunity for redemption - a wave of democracy was flooding North Africa, and it seemed as if it would be enough to give the dictator a slight nudge in order to watch him topple. European voters and awe-struck Arabs would unite in applause. It would be a quick and inexpensive peace.

However, the reality has been nothing of the sort, and European voters will again have to consider where their pet ideology (good versus evil and democracies versus dictatorships) is taking them, why that ideology prevents them from looking sensibly at the rest of the world, and why it has again led them into failure. The Africans, by contrast, seem to have the right idea. That is, of course, assuming that nothing happens to Gaddafi.