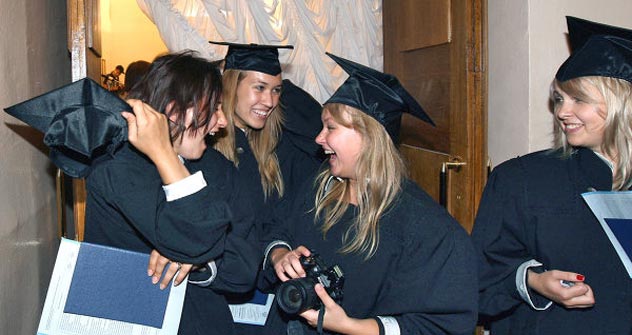 Russian government is set to launch a program to finance the education of at least 10,000 young students in leading universities across the planet including India on the condition that they bring their new skills home afterwards.

Under the program, called Global Education for Russians, the government will pay back reduced-interest loans for students who gain places in Western universities if they return to Russia and work in the public sector for at least three years. If a student chooses to work in the private sector or start his or her own business, the government will pay back 50% of the loan.

The program aims to lay a foundation for Russia's future by producing Western-educated state officials and businesspeople.

"There are a lot of people in Russia who have great potential to study in the world's best universities, but they feel restricted because of the high education costs," says Murad Sofizade, the president of Russia's Harvard Alumni Club and a co-author of the program. "We want to give them such an opportunity and the right to decide whether to return to Russia and get the loan repaid by the government or to stay abroad and repay the loan themselves."

The authors pledge the program is due to come into force in 2012. The government plans to spend around $60 million in 2012 to fund bachelors, masters, PhD as well as MBA programs in the Ivy League Universities, Oxford, Cambridge, INSEAD and others.

Similar programs have already been implemented in Brazil, India, China, Mexico and the ex-Soviet state of Kazakhstan.

The Kazakh educational program, Bolashak ("Future"), that was introduced in 1993, has produced 129 active top government officials. Over 3,000 students annually are sent to study at the top universities, including Stanford, Harvard, MIT, Warwick and others.

Under the Bolashak program, however, students have to provide their property as collateral against the loan. This is something that the Russian program wants to avoid.

"Strict conditions do not work in the modern world. It is not right to impose such obligations on highly professional people," Sofizade says.

He also says that even if students fail to make an immediate return to Russia the country will still benefit in the long run.

"It's not that important if the graduates return or not. Even if they don't, they will still do well for their country. Mexicans in the United States make up to 10 percent of Mexican GDP by sending back money to their relatives. Some of them even return in a decade or so and start their own companies," Sofizade explains.

Julio Hajime Toy, a Mexican national who is studying for a joint degree program at Tufts University and Harvard, says that the analogous Mexican educational program has a somewhat low return rate.

"Although I have a specific project to work with upon my return to Mexico, the government has done almost nothing to implement a strategy to reintegrate returning graduate students to the work field," he says.

"Actually the major scholarship grantor, the Mexican National Council of Science and Technology, has no legal power to force scholarship holders to return to Mexico after graduation. Many of them prefer to stay in the U.S. where they see better possibilities for a well-paid job."

The Global Education initiative was much discussed during the recent St. Petersburg International Economic Forum on June 16-18.

Russian Education Minister Andrei Fursenko confirmed that the program is set to be launched. He also pointed out that it is not only the government's responsibility to provide this program, but also the responsibility of companies to create jobs suitable for Western-degree holders.

"Russia needs to enter into a global competition for the best minds and create a fruitful environment for their professional development without imposing any obligations or restrictions, but through giving them opportunities," Yelena Kvochko, a graduate from the University of Massachusetts, says.

"The only way to attract human capital, just like financial capital, is to remove barriers, rather than impose new ones," she stressed.

"When you're young, ambitious and career-driven, Russia is an ideal place to work. In the United States it usually takes at least ten years to get to a senior role in a company and it doesn't always depend on you. In Russia, on the other hand, you can see the results of your efforts very quickly," says Moldavsky, who is the head of Russia and CIS at OLX, one of the world's leaders in online classified.

Critics of the Global Education program cite the country's high budget spending on such "costly" education, instead of properly financing Russian universities.

"If we are speaking about a technical education, I would like to remind you that the Soviet Union succeeded in nuclear industry, aviation and shipbuilding thanks to its own graduates from technical universities," Konstantin Gavrilenko, a third-year student at the Moscow Institute of Physics and Technology, pointed out.

However, while Russia may have a good record in such fields, the authors of the program say they will concentrate on those spheres where it does not enjoy such success - mainly business and management.

This article was first published by RIA Novosti