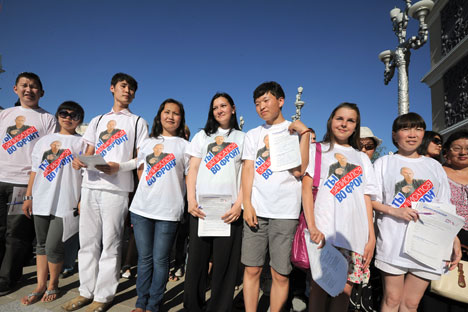 United Russia is looking to unions and youth groups to create a force field of people for the upcoming election. But charges of coercion and confusion over the mission of the People’s Front could cause the plan to backfire.

In advance of December parliamentary elections, Russian Prime Minister Vladimir Putin has created the All-Russia People’s Front, an entity that appears designed to bolster sagging support for the ruling United Russia party by vacuuming up organized segments of society such as business groups, unions, youth and voluntary organizations.

Hundreds of organizations, which boast millions of members, aligned themselves with the People’s Front after Putin unveiled it on May 6. The Russia Agrarian Movement, for instance, brought 38 million ostensible members to the organization. And numerous businesses signed up their workers—in many cases without asking them.

The only criteria for membership is agreement with the ideas of Putin, and the party which backs him, although the prime minister is not a member of United Russia. Putin has been barnstorming around the country to drum up support.

Critics have said the Front’s membership lists are larded with the mercenary not the motivated, and they compare the burgeoning rolls to the Soviet-era Communist Party, when millions of people saw membership as a ticket to advancement and success.

Putin has urged state and private companies to create People’s Front cells at work. The newspaper Vedomosti said Putin’s call has led to some debate within major firms because business leaders want to hedge their political bets and avoid making an early choice between Putin and President Dmitry Medvedev. The president has been noticeably circumspect about the Front.

United Russia said it will provide members of the front with some political education. The party will provide venues to debate Russia’s future developments. Front members will have the right to put forward their own initiatives, discuss plans for the budget, and even get elected to the Duma, the lower house of parliament, on the United Russia ticket.

Political analysts are in no doubt that this is an electoral gambit, and only wonder if the Front will survive much beyond voting season. For now, United Russia needs all the help it can get. The latest opinion polls show that support for United Russia has dropped significantly over the last year, and the party can no longer assume it is unbeatable, according to political analyst Vladimir Slatinov.

“By creating the National Front, Vladimir Putin is aiming to preserve the same system of government that was established in the middle of the last decade, and the cornerstone of this is United Russia’s qualified majority in the Duma,” said Slatinov. “So the new political force was created to prevent any potential disturbances to the system.”

The People’s Front is not yet known and not very popular, according to opinion polls. Every second person surveyed had never heard of the organization and of those who had only one third said they would back candidates approved by the People’s Front, according to the Russian Public Opinion Research Center (VCIOM).

Gleb Pavlovsky, head of the Effective Politics Foundation, said it is possible that the Front will not be able to cope with its mandate.  “Vladimir Putin’s project has created a bifurcation in the minds of United Russia voters, the conservative, centrist electorate cannot vote for two political forces at the same time,” he said. “It is impossible to explain to the electorate that United Russia and the People’s Front are one and the same thing, and this has actually resulted in something of an image crisis for the ruling party. The ruling party now presents the voter with three different brands: ‘Putin’, ‘United Russia’, and the ‘People’s Front.’”