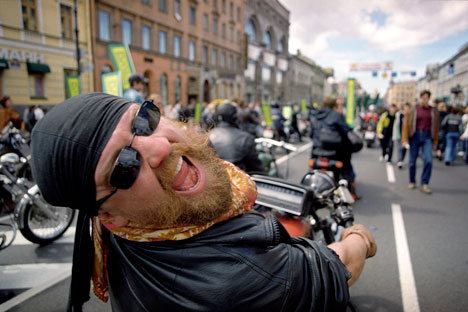 Bikers, who say they get the short end of the stick on the road, raised their voices when one of their own was seriously injured in a traffic accident.

Leather. Hard rock. Disdain for traffic rules. Cruising on a highway. Wind in the face, and maybe the occasional beer belly. There are many associations with the biker subculture, but political activism is not on the list.

However, a recent display of bikers’ grassroots activism in Moscow — a rare but not unique event — has raised questions about whether the motorcyclists are capable of organizing to pursue political goals, much like car drivers have done.

During the protest last month, about 200 motorcyclists gathered in front of police headquarters to demand a thorough investigation into an accident earlier in the month when a luxury Porsche Panamera, driven by a Moscow businessman, crashed into biker Rauf Abzalov, 43, seriously injuring him.

The protesters, who cruised the Garden Ring before rallying on Ulitsa Petrovka, acted over fears that the crash investigation had stalled, event co-organizer Yury Nekrasov told The Moscow Times.

Police guards did not allow the bikers to enter the building but accepted their petition to police chief Vladimir Kolokoltsev — who, Moskovsky Komsomolets reported, was outraged by the unauthorized rally.

No sanctions followed, however, and police briefed representatives of the biker community on the investigation’s progress two weeks later.

It appears that any biker discontentment has been laid to rest — for now. But bikers could become a force to be reckoned with in the months before the State Duma elections in December. Prime Minister Vladimir Putin has himself put the bikers on political footing by ­mingling with Moscow’s Night Wolves, Russia’s oldest and largest motor club.

“The number of motorcyclists is rising,” said Alexandra Korol, a co-organizer of last month’s protest, explaining what motivated the bikers. “Anyone of us could be in his place.”

Korol has a point because the number of road accidents involving bikers is also growing, if not by much. During the first five months of this year, Moscow police registered 322 incidents, slightly higher than 2010’s year-on-year figure of 317, said a spokesman for the Moscow branch of the Federal Road Agency.

"We also just got fed up with the rising negativity toward bikers," biker Nekrasov said. "For some reason it's common practice to automatically blame the biker for accidents. We didn't want the driver to get away with what he had done."

The grassroots protest was simultaneously proposed by a handful of regular bikers, including friends of Abzalov, who discussed the story on web forums for motorcyclists, Nekrasov said.

While the bikers won their desired results, Vyacheslav Lysakov, head of the Svododa Vybora (Freedom of Choice) motorists rights group, said protesting outside police headquarters and disrupting traffic was not the right way to express disappointment.

Bikers should have simply written a letter to the prosecutors in the case, said Lysakov, who is a member of the All-Russia People's Front, a new public group created by Putin in May.

He said the motorcyclists won't become an active political force until they join an existing organization like the All-Russia People's Front through which they could integrate with the political system and receive representation in the Duma.

"Why scream under the window when you can enter through the door?" Lysakov said.

Motorcyclists are not a political group, and what unites them is their love for the bike, said David Konstantinovsky, director of the Center of Sociological Education, Science and Culture.

Still, many of them are young and active and ripe for being drafted as a force in politics, he said.

No opposition group has expressed interest in bikers, and the organizers of the bikers' protest insisted that they did not having any political interests guiding them. Other motorcyclists agreed — even those who themselves rub shoulders with politicians.

"We do not want to get into politics," said Alexander Zaldostanov, who heads the Night Wolves biker club. "And we do not need any perks."

Zaldostanov, known by the nickname "Khirurg" ("Surgeon"), had met Putin several times, including in Crimea last summer when Putin lead a column of motorcyclists to a biker convention, riding a tricycle himself.

Zaldostanov said he has only positive feelings and the outmost respect for Putin, calling him "the only one in the government to not be ashamed of."

But the big wheel of the Russian biker movement acknowledged that fellow bikers were going to continue to stand up for their rights.

Nekrasov also said he hopes motorcyclists will keep organizing protests if needed. "This is the first time when the wave of activism is clear and head-on," Nekrasov said.

Although the biker scene in Russia is about 20 years old, it was not until recently that its members began to dabble in public activism.

About 100 Kaliningrad bikers protested against increased tariffs on motorcycles in December 2009, and about 60 of them canceled their motorcycle registrations altogether. Two months later, the bikers joined a rally of 12,000 people unhappy with the economic policies of then-Governor Georgy Boos, who eventually lost his job.

In recent months, bikers have also united with car drivers to protest rising gas prices in several regions, including Chita in eastern Siberia.

Their efforts are not a complete surprise because other social groups have also taken up public activism. Other examples include teachers, who protested education reform in Moscow in June, and football fans, some 5,500 of whom rallied in December on Manezh Square after accusing police of mishandling a murder investigation.

"People who were previously on the sidelines are stepping up," said Andrei Dozorov, leader of the Blue Buckets, a motorist group that opposes the abuse of flashing blue lights on government officials' cars. "They are seeing that results can be achieved through rallying."

Dozorov cited a recent Blue Buckets victory in which a court took away the license of a driver at the Defense Ministry who in May rammed his car with a flashing blue light into another vehicle in Moscow and fled the scene.

But he also said the authorities' newfound toleration of unsanctioned public protests might be a pre-elections stunt. Indeed, the government gained a reputation in the 2000s for cracking down on any and all unsanctioned protests.

"It may just be a way to improve its image and show that it cares about its people," Dozorov said.

When the elections are over, the crackdowns may return, he said.

The article was originally published in the Moscow Times.