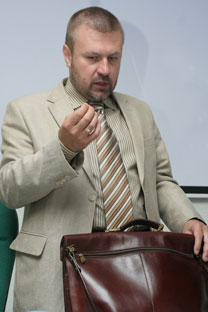 Investigators, prison doctors, prosecutors and judges are responsible for the death of the Hermitage Capital fund lawyer, the presidential council on human rights stated. The international community watches to see what happens next.

The Russian lawyer who once worked for a U.S. investment fund died after a brutal beating from prison guards, the presidential council on human rights confirmed last week. Investigators, prison doctors, prosecutors and judges are all responsible for the death of the Hermitage Capital fund lawyer, the Presidential Council on Human Rights also found.

Their findings have international implications, as the case is seen as another litmus test for how the Kremlin can handle cases of alleged official corruption and abuses of power. In death, Magnitsky has become an international cause celebre: The 37-year-old lawyer died alone in prison in November 2009. He had accused officials of tax fraud before his arrest.

On the fifth of July the presidential council presented President Dmitry Medvedev with the results of an investigation into the circumstances that led to the death of the Hermitage Capital lawyer. The council’s findings consisted of three separate investigations.

The first report deals with the circumstances surrounding Magnitsky’s death and confirmed that the 37-year-old lawyer was held in unbearable conditions, denied medical assistance and beaten not long before his death. The human rights activists argue that the specific officials responsible for the lawyer’s death are Ministry of the Interior investigator Oleg Silchenko, whose permission was required for the prison doctors to take any sort of action, and Alexandra Gauss, the chief doctor at the prison where Magnitsky died.

The second report covers the numerous violations committed by the judges who made the decision to take Magnitsky into custody. The lawyer’s complaints on the conditions of his detention were denied and not even considered, the human rights activists said, while the investigation’s arguments on the cause of  his arrest were never even examined. In addition, the council maintains there was a conflict of interest in the Magnitsky case: the criminal investigation against Magnitsky was handled by investigators whom he had previously exposed as corrupt.

The third report – the most controversial one – deals with the hidden motives for the accusations against Magnitsky. The original investigation argued that the lawyer organized the embezzlement of $230 million from the state budget, while Magnitsky himself had previously accused the same investigators of stealing the money. According to the National Anticorruption Committee, there is no way Magnitsky could have organized the theft. The Hermitage Capital companies, via which the money was stolen, were actually seized and re-registered under the names of different owners. To carry out the raid, the companies used documents seized from the fund by Police Lieutenant Colonel Artem Kuznetsov and held by Major Pavel Karpov. Both of these individuals were later involved in the investigation of the Magnitsky case. The National Anticorruption Committee noted “instances of sabotage and interference with the investigation” into the circumstances surrounding the lawyer’s death by those who led the criminal prosecution against him.

More officials appear to be involved

The presidential council said its investigation is not yet completed. National Anticorruption Committee Chairman Kirill Kabanov said new people could emerge in the Magnitsky case. The documents, he said, do not reveal the full names of some officials who could be connected to the lawyer’s death and the embezzlement of $230 million. There are officials who could be implicated within the Ministry of the Interior, the Prosecutor General’s Office, the Federal Security Service, the Ministry of Taxes and Levies, the Treasury, and the Ministry of Finance. “We will do everything possible for the culprits to be punished even if they are high-ranking people from the Federal Security Service, investigators or their superiors,” Kabanov said, noting that “this isn’t even at the level of department heads, but much higher,” So far, he said, the investigation “has not even been able to work its way up to a colonel or lieutenant colonels.”

Medvedev promised to convey the council’s findings to the Russian Investigation Committee, which is investigating Magnitsky’s death. A day before the human rights activists released the report, law enforcement agencies unexpectedly announced that the prison doctors had been found guilty of withholding medical attention. “The investigation is planning to file criminal charges against the individuals who committed these violations,” Investigation Committee spokesperson Vladimir Markin said. Previously, investigators had said repeatedly that the doctors were not responsible for Magnitsky’s death. Kabanov said this change in rhetoric could be attributed to the fact that the case has been put under the control of the president, who has admitted that “there could have been crimes committed” in the Magnitsky case.

Describing the findings of the presidential council, observers have cautiously said that “the ice has been broken.” Every major television channel reported on the conclusions reached by the human rights defenders after previously ignoring the Magnitsky case. “The fact that the Magnitsky case is being reviewed at this level offers a chance that somebody will be punished, although I’m afraid that not everyone will be,” Yevgeny Arkhipov, the president of the Association of Russian Lawyers for Human Rights, told the Kommersant newspaper. Yana Yakovleva, the chairperson of the Business Solidarity non-profit association, said the members of the presidential council and law enforcement have been focusing on different things. “For the council, it is important to determine why Magnitsky ended up in the detention facility. Law enforcement officials want to focus solely on Magnitsky’s death. If an explanation is given to the main question of why he was there in the first place, there is hope that everyone will be punished,” she said.

No one has been held responsible for Magnitsky’s death.

Kabanov called this statement “insincere, to put it mildly. Everyone at the Ministry of the Interior knows everything, who, how much, how and where [the money was taken]. Why are they hiding it?” he asked.

President Medvedev ordered the investigation into the circumstances surrounding Magnitsky’s death in November 2009 following a wave of international outrage. The U.S. Congress and the parliaments of E.U. countries have discussed the possibility of banning the entry of Russian officials allegedly involved in the lawyer’s death. In December 2010, the European Parliament recommended that E.U. governments introduce sanctions in relation to several Russian officials if substantial progress is not made in the Magnitsky investigation.

The European Union is also highly interested in the findings of the presidential council. “We are following this report with great interest. We will wait to see what happens next,” Fernando Valenzuela, head of the EU delegation to Moscow, told Interfax.