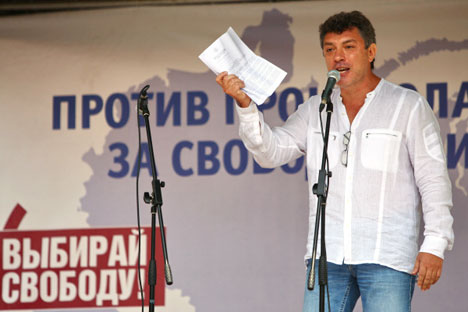 One of the co-founders of the PARNAS party Boris Nemtsov is giving his address. Source: RIA Novosti

The Ministry of Justice’s refusal to register PARNAS doesn’t make life easier for United Russia and Right Cause; it makes them look less capable.

The refusal by the Russian Ministry of Justice to register the opposition People’s Freedom Party, known as PARNAS, didn’t come as a surprise.  Everyone, including the party’s four co-chairmen – Mikhail Kasyanov, Vladimir Milov, Boris Nemtsov and Vladimir Ryzhkov – called this decision “expected.”  And expected it was indeed: The current law on political parties makes it virtually impossible for any new entity to get registered without explicit support from the Kremlin.  Since 2009, only one political party, the authority-friendly Right Cause, has managed to win registration; applications by seven others have been denied by the Ministry of Justice.

Of all registration requirements, the most draconian is the one establishing a 45,000-member threshold.  In today’s Russia, the demand for political parties is completely saturated, and no party, except for those already represented in the Duma, can muster this number of cardholders.  It is possible to successfully run an unofficial political movement with 10,000-20,000 core activists, but when such a movement decides to register as a party, it faces a daunting challenge of swelling the membership numbers to the magic 45,000.  Enter the “signature collectors,” a peculiar breed of political technologists whose job is to find ordinary citizens who would allow their names and personal data to be included in party lists.  Naturally, the collectors are paid for their services: According to Nezavisimaya Gazeta, a collector receives between 70-100 rubles ($2.50-$3.50) for each signature.  They regularly cheat on their clients by filling signature lists with fake names (taken, for example, from different databases).

This is exactly what happened to the PARNAS list after collectors got their hands on it: a “random” check conducted by the Ministry of Justice has revealed that 82 signatures on the list belonged to deceased people, minors and even inmates.  (The PARNAS leaders immediately suggested that unqualified signatures had appeared on the list as a result of a deliberate provocation by the Russian security services.)  Another problem in the registration papers pointed out by ministry officials was with the party’s charter that allegedly didn’t allow for rotation of its leadership – in violation with the federal law on political parties.  These two factors – unqualified signatures and faulty charter – were quoted by the Ministry as reasons for the registration denial.

The legal basis for such a decision isn’t clear, to say the very least.  The original PARNAS list included 46,148 signatures.  However damaging to the credibility of the party the 82 unqualified signatures might be, they don’t necessarily prove that the party has indeed failed to overcome the 45,000 member threshold.  A “random” check is an indicator, not a proof.  And something is outright fishy with the charter claim: Articles 26 and 34 of the PARNAS charter posted on the party’s website clearly spell out annual rotation of the federal and regional political councils.  Either officials from the Ministry of Justice who reviewed the application can’t read basic Russian, or – for those with an eye for conspiracy – these articles were modified on-line after the original application had been submitted.

It appears that the decision not to register the party was not only “expected” by the PARNAS leadership; it was actually their desired outcome.  Ignoring demands by the regional party activists to continue the fight, The Magnificent Four have flatly refused to appeal the decision in court or reapply for registration.  (“It is impossible to try to work with this regime within the bounds of the law,” said Ryzhkov.)  Instead, they promised to “move their actions onto the streets” and call for the boycott of the December Duma elections, which, two months before their official announcement, Ryzhkov and Co. already call “illegitimate.”

If somewhat awkwardly, President Dmitry Medvedev tried to extend a helping hand to the “united liberals” by suggesting that the party could eventually be registered if it got rid of the “dead souls.”  This suggestion didn’t go well with the defenders of people’s freedom: Ryzhkov called Medvedev’s advice “sophisticated mockery and farce” and pointed out that if the president cared about PARNAS, he could simply “call the Minister of Justice, Mr. Konovalov, and instruct him to register our party.”

What a remarkable statement!  After years of professing passion for Russia’s need to combat lawlessness, Ryzhkov turns out to have no problem with the president executing the notorious “telephone law”— if the outcome of this call suits Ryzhkov’s interests.

The position of the PARNAS leadership is blessed with certain logic: They may have failed to draw a roadmap to success, but they have succeeded in developing a strategy for failure.  As happened with virtually every “united liberal” project before, PARNAS is already being shaken by internal squabbles.  The animosity between Milov and Nemtsov over who would be a better candidate for the 2012 presidential election has broken into the open; sensing tensions at the federal level, regional party activists begin heading to the exit.  The party registration would not have prevented its inevitable collapse.  In contrast, the denial of registration may speed up the party’s degradation in the regions, but it will also give its leaders a new lease on life by solidifying their status as political martyrs in the West.  Worse, the decision not to register PARNAS will be met with joy by the Russophobes all over the world – as a new incentive to trash President Medvedev’s modernization agenda.

The consensus among the “opposition” is that the campaign against PARNAS was orchestrated by Prime Minister Vladimir Putin in an attempt to reduce the “electoral risks” for his United Russia party.  This is ridiculous. United Russia’s voters and potential voters for PARNAS live in completely different universes and would never consider voting “across.”  The only real beneficiary of eliminating PARNAS from the electoral field is Right Cause, a rising star in the perennially boring Russian political galaxy.  The lavish attention that President Medvedev showered on the party’s newly minted leader, Mikhail Prokhorov, implies that the Kremlin has some long-term interest in having Right Cause enter the Duma in December.

If the decision to block PARNAS’ registration was made on the assumption that this will help Right Cause, then the Kremlin has made a mistake.  Prokhorov is a big boy and can stand up for himself.  It would be much better for the credibility of Right Cause and Prokhorov personally – and for the future of true liberalism in Russia, for that matter – if the party won Duma seats by competing with PARNAS in the elections.  Using a metaphor befitting the owner of the New Jersey Nets, Prokhorov could finish up the game by a winning three-pointer.  Instead, with PARNAS removed from the court, he can now impress the crowd only by an unopposed dunk.

Eugene Ivanov is a Massachusetts- based political analyst who blogs at The Ivanov Report.