Why is Medvedev Moving the Capital Outside of Moscow? 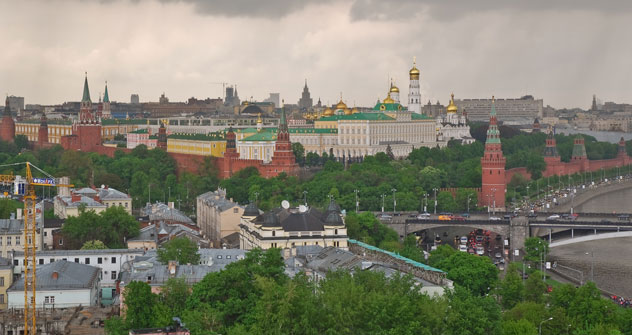 Russia’s President Dmitry Medvedev has ordered the government to move all government agencies and their employees out of Moscow to a designated area in the suburbs (to be determined at a later date) which, together with the city of Moscow, would constitute a new and unique federal district. What does Medvedev hope to achieve by such a move in Russia? What would moving the capital out of Moscow mean for the Russian state? How would this impact Russian federalism? Would this really ease the horrendous traffic in Moscow? Would such a move be enough to make Moscow an international financial center? Would this move make Medvedev more popular and stamp his name in Russian history?

Medvedev’s official rationale for this decision was to ease the gridlock on Moscow’s roads and improve living conditions in the Russian capital to make it a better, cleaner and more attractive place for foreign investors and financiers. Encouraging these professionals to move to Moscow is an essential part of the strategy to make the Russian capital a major international financial center – a long time pet project of Medvedev and his liberal economic advisors.

Many major foreign investors have complained to Medvedev that horrendous traffic jams in Moscow make it an unattractive destination to do financial business.

Despite the removal of former Moscow Mayor Yuri Luzhkov, it seems there is little that new authorities could do to make any drastic improvement in the road situation. Moscow’s downtown, which houses almost all government buildings, is indeed a very crowded place, with little room for organic growth and construction of modern freeways. Moving government offices out of central Moscow beyond the Garden Ring would probably easy many of the traffic problems.

Medvedev, however, has opted for a much bigger relocation. He has basically proposed building an entirely new Russian capital in the Moscow suburbs. The last time the capital was moved out of Moscow was under Peter the Great, who built a “European Capital” for Russia in St Petersburg. Medvedev has not proposed anything of that magnitude, yet the significance of creating a special capital for government workers will not be lost on anyone. It is an innovation for Russia.

Building a special city to house government institutions is not a novel idea. Many major and prosperous states have done a similar thing – the United States, Canada, Australia, Brazil, Malaysia, the former West Germany (out of the political necessity of dealing with partition, of course), as did the less-successful Pakistan. In the Former Soviet Union, Kazakhstan moved its capital from Almaty in the south to Astana in the north to compensate for geographical divergences that were undermining the cohesiveness of the new state. Last week, Georgia made a decision to move its parliament out of the capital Tbilisi to an important provincial center Kutaisi.

Well, it’s been done before with varying degrees of success, but what does Medvedev hope to achieve by such a move in Russia? What would moving the capital out of Moscow mean for the Russian state? How would this impact Russian federalism? Would this really ease the horrendous traffic conditions in Moscow? Would such a move be enough to make Moscow an international financial center? Are there significant political implications for Russia in Medvedev’s decision? Would this move make Medvedev more popular and stamp his name on Russian history?

The suggestion that Medvedev has “moved the capital out of Moscow” seems to be infused with a bit of summertime madness, or with a kind of excitability and nervousness, which are deliciously curable with a tall, well-iced gin-and-tonic.

What is proposed is the migration (at a future date) of many government administrative offices and staff to a not-yet-built campus some distance from the Kremlin. While there are many departments that would benefit from such a move, others cannot realistically change location for different logistical, technical and security reasons.

In Washington DC, the Pentagon is located some distance away from the center of the city. Louis XIV had his offices in Versailles. In neither case was the capital city of the country (in those cases Washington and Paris) “moved.” There is no reason why many of the administrative offices, currently scattered in central Moscow, should not be conveniently relocated to a custom-made campus in the suburbs. This is not “moving the capital of Russia.”

Moscow is an old city, though certainly not as ancient as Rome, Athens, London or Paris. Moscow is overpopulated. The building frenzy of the past two decades occurred without any consideration for infrastructure such as roads, mass transit or automobile parking. Every skyscraper added to the center of Moscow means tens of thousands of additional people (occupants and service staff) who will crowd into the city to either work in the new building or service its operation.

Moscow’s bloating began even before 1917, but skyrocketed in Soviet times and much of this growth was caused by the ugly deformities of Soviet society. The countryside was desolated and survival in cities was much easier than in villages. Marxism in any case is an urban creed: Karl Marx hated villages and farmers, and so did Lenin.

Furthermore, Moscow, Leningrad and Kiev were cities, which were given top priority in receiving very scarce basic supplies. Even in the late Soviet period, enterprises 200 kilometers away would send employees on “shopping expeditions” to Moscow – to buy basic necessities like sausages, clothes, shoes, and toilet paper. Everyone tried to move to Moscow, and many succeeded. Add to the Soviet-era population growth the explosive growth of automobile ownership (a tangible proof of growing living standards in the post-Soviet era) and the aforementioned irresponsible construction of huge office buildings – and urban congestion is inevitable. One sometimes wonders why the traffic in Moscow moves at all. It must be all the local saints praying for their modern descendants.

Thousands of Russian government officials of various ranks get stuck in those traffic jams, either on their way into the offices, or travelling between offices for meetings. The damage to productivity of an already creaking governmental machine is definitely significant. Thus the motivation to consolidate offices and to place them outside the congested center of Moscow is rational, realistic and not surprising.

There may be fewer “migalki” – the blue lights on cars that allow high-ranking officials to flout basic traffic rules – on the Moscow roads as a result. There may be one undeclared intention: to give Russian bureaucrats fewer opportunities to be de facto absent without leave from work. (“Ivan Ivanych has just left the office en route to the Kremlin” is announced at one end of the journey and simultaneously “Ivan Ivanych has not yet arrived from the Kremlin” is announced  at the other, while Ivan Ivanych is in reality swimming in some pond…). Now Ivan Ivanych will always have to be within walking distance of his desk, and might have to take up bicycle riding on campus, which might improve his longevity and humor…

There is no reason for paranoia. Medvedev did not “move the capital” – but he is proceeding with modernization…

President Medvedev’s initiative to relocate the seat of the Russian government out of the city of Moscow to a suburban location raises many serious questions, although it is a very important and vital initiative, with game-changing implications.

It remains a mystery what the President meant by proposing to set up a special “Capital Federal District.” Does it mean a separate Federation subject, carved out from territory belonging to the city of Moscow and Moscow Region, with special and peculiar constitutional rights and forms of political representation as is the case with the District of Columbia in the United States (it cannot elect members of Congress and senators and its budget is approved directly by the US Congress, although it does elect a mayor and a city council by popular vote)? Will it be headed by another unelected Presidential Envoy (which would destroy the political power of the mayor of Moscow)?

Both Moscow and St.Petersburg are already “federal cities” – they are separate Federation subjects in and of themselves, although calls for their integration with surrounding “oblasti” (neighboring regions which are also separate Federation subjects) are raised with increasing frequency. St. Petersburg is already the seat of Russia’s Constitutional Court and the operations command headquarters of the Russian Navy. So what would the “special status” of the proposed Federal Capital District mean in practice? This is a key issue, given the increasing political and administrative weakening of the Federal Districts as a layer in the Russian government administration of its regions. The Federal Government, particularly the Ministry of Finance and the Ministry of Regional Development, are much more important players than the Federal Districts and the Presidential Envoys who head them.

Some experts argue that Moscow needs to grow significantly, perhaps by as much as 100 kilometers in diameter, in order to get rid of the transportation gridlock and reroute most of the transit cargo traffic through neighboring regions. This would require the abolition of the Moscow Region as a Federation subject with outlier suburbs being transferred to neighboring regions Tver, Kaluga, Vladimir, and Yaroslavl.

What specific government agencies will be relocated to the new “seat of government”? Will the President and the Prime Minister also move out of the Kremlin and the Russian “White House”? Will the Presidential Administration relocate as well? What about the Defense and Foreign Ministries, as well as special security services with their sophisticated secure communications networks? What about the Duma and the Federation Council?

Some experts say that the Kremlin and surrounding neighborhoods will have to continue to serve as the seat for the President and his Administration – perhaps to instill fear and respect by virtue of location. The same logic argues for keeping the MFA where it is now – in the monstrous and aging Stalin skyscraper on Smolenskays Sennya (you cannot order the relocation of foreign embassies to locations 50 miles from downtown Moscow).

If that is the plan, then moving the government to a location beyond the Moscow Beltway (MKAD), makes little sense and could probably result in more congestion downtown (where today a government bureaucrat could take a brisk walk or take the Metro, tomorrow he will have to drive 20 or 30 miles to attend an interagency meeting at the Presidential Administration a block from the Kremlin).

Will the government bureaucrats move to live in the “Federal District” or will they commute every day in and out of Moscow (which simply will change the traffic gridlock patterns without eliminating the gridlock)? How much new office and residential space needs to be built to accommodate the “seat of the Russian Government”?

Why are they now calling for building the International Financial Center in the suburbs? And what would it look like? And could it really be ordered into existence in a place where the largest financial transaction has recently been limited to purchasing a plot of land or a home?

Medvedev’s initiative, although necessary, is a good example of how big government decisions are made in Russia today – with little preparation, almost no research and no interagency debate, resulting in a set of different options presented to the President for his decision. This results in questions that are left hanging in the air.