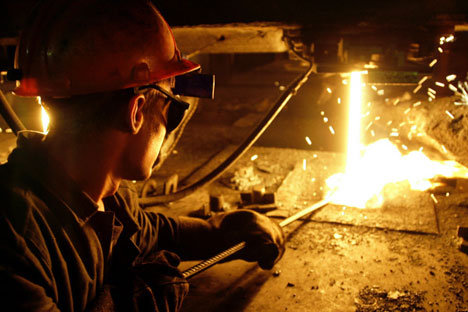 Novolipetsk Steel, billionaire Vladimir Lisin's steelmaker, may consider acquisitions in Asia and the Middle East after paying Duferco Group $600 million to gain control of seven mills in Europe and the United States.

"To remove risks to our production, to our ability to meet demand, and to increase the value of the company, we need to diversify our business," said Oleg Bagrin, a board member at the steelmaker, known as NLMK. "We are mostly interested in downstream projects in India, the Middle East and some countries in Southeast Asia to make value-added products."

NLMK wants to increase production in markets where demand is rising faster than in Russia. The company has lagged behind the deal making of rivals Severstal and Evraz Group, which have bought assets in the United States and Europe. NLMK pulled out of a proposed purchase of Beachwood, Ohio-based John Maneely for $3.53 billion, which would have been its largest acquisition, in 2008 as the global financial crisis struck.

"Russian steel consumption lags behind production, while the market in India shows double-digital growth," said Alexander Pukhayev, an analyst at VTB. It makes sense for NLMK to seek assets in developing markets to expand its business, he said.

"In India we will be looking for assets that are close to raw material sources, with access to ports and developed infrastructure," Bagrin said.

The mills acquired from Duferco in a purchase that closed July 1 are capable of producing 5.5 million metric tons of steel products a year. "This deal has brought us closer to our clients because we will produce the finished items in the market where the demand is," Bagrin said.

The Russian steelmaker plans additional investment of as much as 80 million euros ($116 million) at the purchased plants by 2015 to make rolled steel and increased output of value-added items.

The spending includes a new unit at the Clabecq plant in Belgium to produce higher-strength, thick-plate steel, Bagrin said. Once this plant is in production, NLMK targets a 20 percent share of the European market for this product, used to make heavy machinery, he said.

NLMK is expanding at home, in Lipetsk, where it makes semi-finished steel. A new blast furnace that can process 3.4 million metric tons of crude steel annually will support a doubling in steel-slab production to as much as 7 million tons by next year.