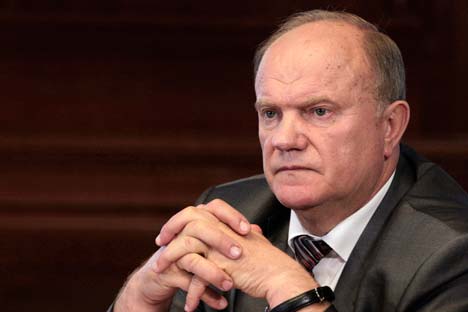 The KPRF is joining the campaigning for the State Duma elections with a lot of gloom and doom. Do they have anything better to offer?

Russia’s lower house of parliament, the State Duma, wound up its spring session and went into its summer recess on Friday, July 8. And as the session wound down, Gennady Zyuganov, leader of Russia’s Communist Party (KPRF) since 1993, took the opportunity on Russian state television to lambast the session’s wasted opportunities and its total failure to deal with Russia’s huge structural problems.

“We could have passed a major, serious budget to support production, especially in industry and agriculture, ensure normal financing to deal with the country’s modernization problems, and do this so as to make every citizen feel better,” said Zyuganov. But “none of the measures passed by the State Duma during this session has solved or will solve these problems.”

The Communists, on the other hand, “proposed nationalizing the mineral and raw materials sector to serve every person, introducing a state monopoly on tobacco and vodka and introducing a progressive tax.”

But, complained Zyuganov, “none of these proposals were accepted, and instead a range of measures were passed to sell off Russia’s strategic property - nearly 900 enterprises, including Sberbank,” the country’s savings bank and by far biggest financial institution.

“They solved some questions, but for the benefit of the oligarchs and thieving bureaucrats, not for the country. Consider – we produced 505 million tons of oil last year and sold 350 million tons abroad. But we’re not building roads. China has built a super highway between Beijing and Shanghai, but we can’t even build a 700-km road between Moscow and St. Petersburg because it’s been held up for three years at Khimki Forest [due to environmental protests about the proposed route near Moscow]. Transport is gridlocked in Moscow and St. Petersburg, and no one knows how to solve the problem.”

Last week, as the country gets into campaign mode, the Communist Party held a plenum and in several interviews, again on state television, Zyuganov gave an even more pessimistic view of the country.

Russia, he argued, has gotten to the point beyond which it would start to fall apart: “We fell into the pit of the crisis deeper than other countries, and are still just selling commodities and not really producing much.”

Only 2 percent of the population is making over 50,000 rubles per month ($1,785), with 80 percent earning wages between 4,000 and 7,000 rubles ($143 to $250), up a maximum of 15,000-17,000 rubles ($535 to $607). After deductions for rent and communal facilities, he said, this made for a miserable existence, pensions were equally miserable, and student grants and scholarships were virtually unavailable. Gas, utility and food prices were constantly rising as a result of the policies pursued by the government and United Russia, the Duma’s biggest party, while the health and educational systems did not benefit the population and farmers couldn’t get decent prices for their produce or any government help.

Zyuganov also argued that President Dmitry Medvedev’s much-vaunted modernization project had run into the ground, and that although the Skolkovo high-tech center just outside Moscow wasn’t bad, it hadn’t actually produced anything.

The Communists might have virtually no chance of winning the forthcoming parliamentary election this December or the presidency in March 2012 against whichever candidate the Kremlin runs, but their critique speaks to many in Russia and reflects a darker present and future than the “official line” of the government and United Russia.

The Communists had therefore “taken up arms against corruption, against crime, against the machinations of power, against the stupid budget, against reforms which are depriving children of a normal education, against attempts to introduce paid medicine for all, against unfunded science.”

Zyuganov’s broader solutions are broadly in line with European social democracy, such as state investment and assistance, support for the village, manufacturing, industrial and small-medium businesses, guaranteed quality education for all and affordable health care. Much of this would be funded by a redistribution of earnings from commodity exports and increased taxes.

But much of this was tried during the Soviet Union, and ultimately failed, defeated by Russia’s age-old problems of bureaucracy, corruption and apathy.

And Zyuganov, like many in Russia, including Prime Minister Vladimir Putin, has a rather rosy view of the Soviet Union’s economic and technological achievements. The Soviet Union just about managed to keep up with the United States in terms of heavy industry and the military, and sometimes even surpass it, but few industries and sectors were competitive internationally. When the Soviet Union collapsed, state orders dried up, especially in the dominant military sphere. Besides, many factories were located in other Soviet republics and were thus lost to Russia. And as every westerner who visited the Soviet Union knows, the country was unable to produce decent consumer goods and durables.

In short, the Soviet economy was already struggling in the 1970s and 1980s, and the collapse of the country in 1991 led to what was probably the biggest-ever production decline in peacetime. Modern Russia has still not recovered from this and has also lost much of the technology developed in the Soviet Union. As the recent report by the Institute of Contemporary Development (INSOR), a think tank headed by Medvedev, noted, “Russia’s technical modernization is all imported.”

It will be much harder to rectify this than Russia’s leaders envisage. Consistently high levels in R&D, design, manufacturing and production across all sectors has really only ever been achieved by advanced Western countries and Japan. Countries like China, the Soviet Union and now Russia, usually get results, if any, by a heavy, concentration of capital and labor in selected areas. But this “project approach” is almost invariably very inefficient in its use of inputs. Moreover, Russia remains weak on design and distribution and many other areas.

Russia’s dependence on energy exports is also high risk. The country found to its cost, in the mid-1980s, the 1990s and again after 2008, that oil prices can be highly volatile. Even worse, most of Russia’s oil fields are now maturing fast and likely suffer falling output in coming years, while Russian oil companies are not investing in greenfield sites because of the tax regime.

Russia needs to start making serious policy changes – and implement them. But so far, neither the government nor the Communists have the right answers.

“There are really just two parties in the country: one of power, oligarchs and bureaucrats, and one of working people.”

“Transneft [the national pipeline network] is to go under the hammer, which will finally destroy the country’s security.”

“The ‘militia’ has been renamed the ‘police’ … so they can sew on new epaulettes!”

“We prepared an educational bill for all… which would guarantee quality education instead of all the guesswork on the multiple-choice Unified State Exam, which is turning the country’s people into psychopaths …”

“Recently I asked major foreign investors what they thought of the St. Petersburg Economic Forum? ‘What Forum? Everyone is trying to get us to invest, but how do you expect us to invest when your own oligarchs have no wish to invest in their own country? Last year capital outflow amounted to $40 billion, this year it’s already $30 billion.’”

“The economic and financial policy of United Russia has no future at all, it’s run into a total dead-end. The president has acknowledged this, but we have to show character to escape from this dead-end.”

“The pluses [on the budget side] are so small you need a magnifying glass to see them. They’ve added 6-9 percent, but since June last year inflation has been exactly 10 percent and has eaten up all that increase – we’ve seen increases in food, transport, communal services… prices are rising faster than those increases.”

“People are talking about modernisation, but if you’re not building tractors, machines, equipment and so on, it’s all an empty discussion. Skolkovo is like a disco at graveyard. If you’ve got any new scientific development, what’s the use if it goes abroad?”

“Our program is for those who can organize production, so that the country’s wealth, especially the resource base and strategic resources, will benefit everyone, and not just 15 clans like today”

“We got 1.34 trillion rubles in extra revenue, but once again, over 700 billion was invested in foreign banks. We could have invested that money in those who work, in our latest technology.”

“In the villages there is an awful cheating [on the part of other parties during voting] because feudalism has undergone a renaissance.”